The Broncos are healthy, upgraded their QB and secondary, and are NFL betting road chalk against an also-upgraded Giants squad. While it's scary to back the Broncos on the road, key injuries for the G-Men have us catching an orange crush.

A pair of teams with renewed optimism, following major roster improvements, face off in a cross-conference battle when the New York Giants host the Denver Broncos in a late afternoon Week 1 matchup.

While New York made some big offseason acquisitions, a multitude of key injuries has resulted in the G-Men being NFL betting home underdogs against Denver, which has a revamped defense and a quarterback that will not be a total negative.

Here are our best free NFL picks and predictions for Broncos vs. Giants on Sunday, September 12 with kickoff set for 4:25 p.m. ET.

Considering these were two of the league's worst offenses last year, it's no shock this total opened the lowest of Week 1 at 42 — and hasn't moved at the time of writing. The spread opened at Giants +1, but as New York's injuries (to skill position players) have piled up, that number has bulged to the home team getting three points. Use the live odds widget above to track any future line movements right up until kickoff and be sure to check out the full NFL odds before placing your bets.

The Under is 4-0 in the Broncos' last four games as a road favorite. Find more NFL betting trends for Broncos vs. Giants.

You gotta give Giants head coach Joe Judge credit: In his first year in New York, he managed a 6-10 record (after starting 1-7) with a roster that had a well-below average QB in Daniel Jones and no game-breaking offensive talent (RB Saquon Barkley tore his ACL and MCL in Week 2) — resulting in the NFL's fourth-worst passing offense and a 31st-ranked 17.5 points per game.

The good news is that New York's defense, which was sneaky-good in giving up the ninth-fewest ppg, bolstered its secondary by adding CB Adoree' Jackson, while the offense added weapons by signing big-play WR Kenny Golladay and reliable TE Kyle Rudolph, drafted sparkplug Kadarius Toney, and will have Barkley back in Week 1.

The bad news is that all the names mentioned above (plus WR/TE hybrid Evan Engram) are all on the injury report and will be less than 100 percent if they play... Plus the offensive line — which was dreadful last season — is still suspect despite an overhaul.

The Broncos were the fifth-lowest scoring offense in 2020, with their best QB being Drew Lock and their worst QB being a wide receiver (we wish we were kidding). Lock's 41.2 QBR was just ahead of recently-released Cam Newton and just behind Carson Wentz, so coupled with the loss of star WR Courtland Sutton to injury and Denver's passing attack was, well, bad.

Denver remedied that by bringing in ultra-reliable Teddy Bridgewater who, while not spectacular, will do a much better job of protecting the football (Denver led the NFL with 23 interceptions in 2020 as well), and with Sutton also back, should help out a defense that looks to be significantly better in 2021.

The Broncos lost their biggest defensive star last year in pass-rushing monster Von Miller, plus the secondary was a source of inconsistency. Despite that, Denver finished 13th in Football Outsiders' Defensive DVOA — and now Miller is back, while the Broncos added Kyle Fuller, Ronald Darby, and ninth-overall pick Patrick Surtain II to solidify the secondary.

It's a big ask to back a team that was not favored in a single game in 2020 to cover as 3-point chalk on the road — but Denver has upgraded at QB (New York has not), Denver's offensive weapons are healthy (New York's are not), and Denver's defense appears scarier than New York's.

This game has the lowest Week 1 total for a reason — these are two of the league's better defenses against offenses that still don't have much high-octane capacity.

The Broncos certainly upgraded at QB with Teddy Two-Gloves, but let's not kid ourselves: Bridgewater is a game manager, through-and-through. He topped 300 passing yards just once last season and threw only 15 touchdown passes in 15 games for Carolina, with quality receiving options in Robby Anderson and DJ Moore. Granted, he didn't have superstar Christian McCaffrey for the majority of 2020 — but guess what: there's no CMC-level player on Denver's roster. Period.

As for the Giants, virtually every skill position player has the same question: How much will they play... if they even play? Everyone seems on track to suit up, but Barkley is certainly on a snap count, as could be Golladay and Rudolph. The only player we can rely on to play at 100 percent is Danny Dimes — and that's not a good thing. Add in that the Giants O-line – which was awful last year and is still to be considered bad this year until proven otherwise – has to try and contain the duo of Miller and Chubb... and we don't see the G-Men lighting up the scoreboard.

Denver went 3-5 O/U in the second half of last year, with two of those Overs coming because their opponent scored 48 and 32 points — something the Giants will not do. New York cashed the Under in 13 of 16 games last year, including a perfect 7-0 as an underdog.

Bet on a low-scoring game on Sunday.

It was a tough rookie year for the 15th-overall pick in 2020, as Jeudy caught only 46 percent of his targets and ranked in the Bottom 5 in the league with a 17.1 percent drop rate. That said, he still had 52 catches, 856 yards, and was 19th among all wide receivers with 5.46 yards after the catch — and there's reason to expect a step forward in 2021.

First, Pro Football Focus also had Jeudy as the league leader with incompletions due to bad quarterback throws (28) and second, he was drawing No. 1 CB matchups with Sutton injured.

On Sunday, Denver will have the hyper-accurate Bridgewater under center, who loves to throw short/intermediate passes and let his receivers create after the catch, playing much better into Jeudy's skillset. Sutton is back in the lineup as well, and will likely draw Giants' top CB James Bradberry, leaving Jeudy to have an easier assignment with a banged-up Jackson or, if he doesn't play, backup Darnay Holmes — who PFF gave a low grade of 48.5 last season.

The drops concern us, but if he can clean that up slightly, just having more catchable passes and easier defensive matchups has us loving this low Week 1 total. 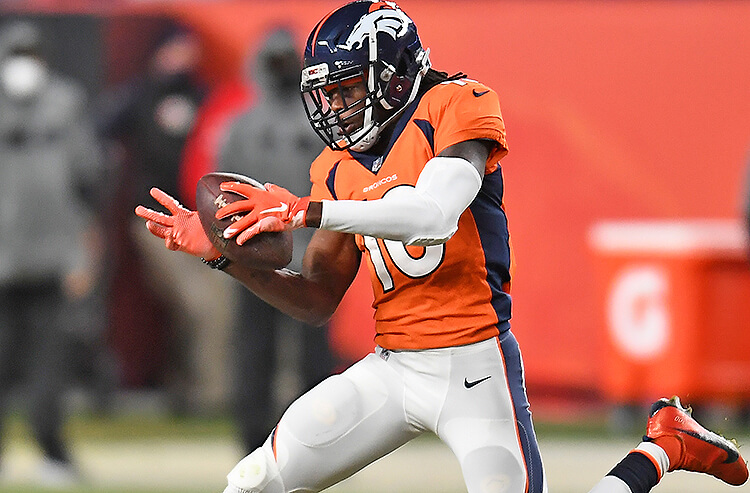