Green Bay is banged up in all the wrong places, while Cincy has had extra time to lick their wounds and prepare for this game. Find out if it will pay off as we break down our Packers vs Bengals picks.

A pair of 3-1 teams will meet at Paul Brown Stadium Sunday as the banged-up Green Bay Packers travel to Ohio to take on the extra-rested Cincinnati Bengals, who are coming off a huge TNF win over the Jaguars

The Packers have ripped off three straight wins but have serious injuries to the O-line, linebackers and secondary, which includes CB Jaire Alexander (questionable). The Bengals are expected to get key players Jessie Bates and Tee Higgins back, as well.

Here are our free picks and predictions for Packers vs. Bengals for Sunday, October 10.

The Packers were -3 on the look-ahead and opened at the same number on Sunday night. The three has held strong at most books but a few books moved to -3.5, only to immediately go right back down -3. The total on the look-ahead was at 48, opened at 49.5 and has been bet up to 50.5.

The Bengals are 52-5-2 SU over their last 59 games when scoring 25-plus points. Find more NFL betting trends for Packers vs. Bengals.

This spread may surprise many who watched the first half of TNF, but this is a game between a team dealing with serious injuries and another team that is getting healthier and has had more time to prepare.

Green Bay was shorthanded last week, but versus a non-existent Pittsburgh offense, it didn’t really matter. Week 5 could be different, as Cincinnati has the No. 3 passing offense at 9.2 yards per pass and a lot of weapons — even if RB Joe Mixon does sit out.

The biggest question mark is the health of elite CB Jaire Alexander who exited Week 4 with a shoulder injury. There is a possibility the star corner is out indefinitely. His absence would be a massive blow to the Packers defense, who is already without pass rusher Za’Darius Smith. Corner Kevin King is also dealing with a concussion while MLB Krys Barnes (concussion) and MLB Preston Smith are also questionable. Green Bay has yet to stop a team from scoring a TD in the red zone as it has surrendered 11 TDs on 11 RZ attempts to open the year. Injuries aren’t going to fix that wound.

The Bengals could get the services of WR Tee Higgins back this week, which would put the passing game back at full strength at the perfect time against a possible Jaire-less secondary. Higgins, Tyler Boyd and Ja’Marr Chase should make up for RB Joe Mixon’s possible absence as the Bengals could lean on the pass Sunday.

Offensively, the Packers have beat Pittsburgh and Detroit and almost lost to the 49ers. All three of those opponents’ defenses sit in the bottom half of the league in weighted DVOA. Even with the Packers having scored 92 points over the last three weeks, they still sit 17th in yards per pass (7.4 yards) and 28th in yards per rush (3.6).

The Cincy defense buckled down last Thursday is still a Top-5 defensive DVOA unit, per Football Outsiders. They get to see a Green Bay O-line that is also crippled with injuries and missing LT David Bakhtiari (out) and possibly LG Elgton Jenkins (questionable). The Bengals have 11 sacks on the year and could make things uncomfortable for Rodgers, who sits 17th in QBR, per ESPN.

Davante Adams may be wishing he had gotten to see the Bengals in Week 4 as starting CB Chidobe Awuzie and S Jessie Bates sat out last week. This week is a different story as Cincinnati head coach Zac Taylor is expecting both to suit up this weekend. Bates was the highest-graded safety, per PFF, last year and is a massive upgrade for this defense, and thus a downgrade for the Green Bay offense.

Green Bay was +3.5 at San Francisco just two weeks ago and is now -3 at Cincinnati. Is there really 6.5 points of difference between SF and CIN right now, especially with the extra prep time?  We rode the Pack last week but are fading them in Week 5.

Combined, both teams have begun the season 3-5 O/U while the Bengals are riding a three-game Under streak thanks to a defense that hasn’t allowed more than three TDs in a game this year. The Bengals haven’t seen many elite offenses this year (MIN, CHI, PIT and JAC) but Green Bay has not looked elite to begin the year, rushing the ball at the 28th-best rate and sitting in 17th in yards per pass. With the Cincinnati secondary getting healthy thanks to the extra rest, this is a neutral matchup for Rodgers, whose passing game had to lean on Randall Cobb last week with the injury to Marquez Valdes-Scantling.

Aaron Jones lost snaps in the rushing game last week as A.J. Dillon took as many rushes (15) as the starter. The Packers still averaged just 4.0 yards per rush and both RBs failed to score. The Green Bay red zone offense has scored on just 9 of 15 attempts this year while they’ve punched in just three rushing TDs with Rodgers producing one of those. The Bengals are holding teams to under 100 rushing yards per game, which is a Top-10 mark. The Cincinnati defense has been led by LB Logan Wilson, who leads the team in tackles and has already picked off three passes this season.

Even with all the weapons in the Bengals’ offense, Zac Taylor’s team is still running just 55 plays per game, which is the second-fewest plays per game in football. The offense is gaining 5.9 yards per play (11th) but at that pace, it hasn’t created many scoring opportunities and has just eight red-zone drives on the season.

This game has been bet up to 50.5 and we’re hoping to hit the Under at the peak. The Green Bay O-line injuries could stall a few drives, while the Bengals and their slow pace may play keep-away from Rodgers, which means controlling the clock.

Wilson’s offense has not started games well this year and has scored just a single TD through four first quarters to begin the year. As we mentioned before, this is a slow-paced offense that struggles to get into the red zone for some reason and scoring in the first quarter just hasn’t been its strong suit this season, either. The Cincy defense has allowed just two first-quarter TDs as the Bengals are 0-4 O/U in first-quarter totals.

The Packers are 2-2 O/U in the first quarter but the offense has only managed points in two of the four 15-minute frames. They scored against the 49ers and Lions but failed to put up early points in the opener versus the Saints and last week at home to the Steelers. If Green Bay looks to establish the run, they could find themselves with some third and longs, as the Packers have been brutal on the ground to begin the year and Cincinnati is a Top-8 run defense.

No books are hanging 1Q 10.5 totals but the Under 9.5 is paying plus money. The Green Bay defense struggles in the RZ but Joe Burrow’s offense also struggles to get inside the 20. If Mixon sits and the Bengals are forced to run Samaje Perine, and that will only help our cause. 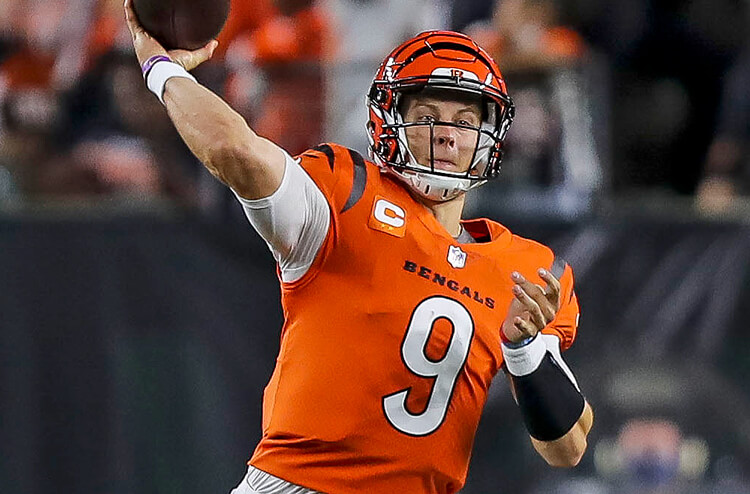