Browns vs Chargers Week 5 Picks and Predictions: Cleveland D, Run Game Will Grind Down the Bolts

After shutting down the high-octane Vikings last week, the Browns will try to silence Justin Herbert and the Chargers in LA in Week 5. Behind that now-scary defense and the league's best running game, we like Cleveland to cover as short road dogs.

A pair of aspiring AFC title hopefuls do battle when the Cleveland Browns visit the Los Angeles Chargers on Sunday.

Both teams are 3-1, with Cleveland coming off a dominating defensive performance at Minnesota, while the Chargers offense torched rival Las Vegas on Monday Night Football.

NFL betting lines have this essentially as a pick'em, with the home Chargers 2-point favorites over a Browns team playing its second straight road game.

Here are our best free NFL picks and predictions for Browns vs. Chargers on Sunday, October 10, with kickoff at 4:05 p.m. ET.

The Browns are 4-0 ATS in their last four games as a road underdog. Find more NFL betting trends for Browns vs. Chargers.

The Chargers are the buzz of the AFC West, sitting tied for first with a 3-1 record, already toppling the Kansas City Chiefs and, most recently, picking apart the (previously undefeated) Las Vegas Raiders on Monday Night Football.

The face of the Chargers' rise (and one of the new faces of the NFL) is second-year quarterback Justin Herbert. The reigning OROY is looking even better in Year 2 and comes into this Week 5 matchup with seven TDs (against zero picks) in his last two games, with a plethora of offensive weapons giving up short, medium, and deep options in every play.

The one pitfall of the Chargers, however, is that they have struggled at times to protect Herbert — and pressuring the QB is Cleveland's calling card on defense.

The Browns came into the season with all the hype on a deep, dangerous offense, but it's been the defense that's brought home the bacon over the last two weeks. After recording nine sacks in a Week 3 win over the Bears, Cleveland went into Minnesota and completely shut down a high-powered Vikings offense in a 14-7 win last week.

Led by DPOY favorite Myles Garrett, the Browns have the best pass rush win rate (59%) in the NFL, while the Chargers are 23rd in pass block win rate (53%). In Los Angeles' game last week, the offense scored just one touchdown in the second half as the Raiders upped the pressure by blitzing on nearly 65 percent of Herbert's dropback — resulting in Herbert averaging 2.1 YPA in those scenarios. The Browns, by way of that dominant D-line, have been able to get the fourth-most QB pressure in the league while blitzing just 21.7 percent of the time (22nd-lowest in NFL).

Cleveland being able to get to Herbert, and being able to keep extra men in coverage, will go a long way — along with the Browns' No. 1-ranked DVOA rush defense — in keeping the Chargers offense out of rhythm.

Also helping the Browns' cause is their dominant, time-of-possession (and soul) -sucking rushing game. Rated No. 2 in rushing DVOA for the year, Cleveland's one-two punch of Nick Chubb and Kareem Hunt have gashed opponents so far, leading the league in run yards, rush TDs, and sitting fourth in yards per carry — helping lead the Browns to the second-most ATOP (34:21) per game.

The Chargers, on the other hand, have allowed the fourth-most rushing yards this season, third-most ypc, and they have the 10th-worst third-down stop percentage. Getting off the field will be difficult for the Bolts and come the fourth quarter, the Browns will again look to impose their will as they have in their three previous wins.

The Browns are averaging 177 rushing yards per game, but only have four rushes of 20+ yards and a season-long run of just 33 yards. They consistently get around five yards per carry — with their sweet spot running between the guards.

Cleveland sends 41 percent of its rushing plays in that area, with an adjusted line yard average of 5.21 yards — second in the NFL, per Football Outsiders. In contrast, that's the weakest spot for the Chargers, who see more than 60 percent of opponent runs attack the middle of their defensive line, giving up 5.24 ALY per run (second-worst in the league).

That also negates Chargers defensive dynamo Joey Bosa, which is a massive determining factor in LA's run-stopping success: Heading into halftime of Week 4, the Chargers were giving up 6.1 ypc on 61 carries away from Bosa, whereas the 14 rushes in his direction generated just 3.1 ypc.

The Browns will chew up the clock on the ground, helping minimize what's needed from injured QB Baker Mayfield (partially torn labrum in his left shoulder), while keeping the ball out of Herbert's hands.

Even when the Bolts do have the ball, however, they rarely are a quick-strike offense — Los Angeles leads the NFL in longest average drive time, as Herbert relies on a number of intermediate passes and plenty of check-downs to do-it-all RB Austin Ekeler. For good measure, the Browns are second in average drive time, so the number of possessions to actually score will be limited in this game.

The Under has cashed in each of Cleveland's last two games — since the defense has come to life —  while the Chargers have actually gone Under the total in all four games so far. Both teams possess plenty of offensive weapons, but the way the two sides play, we're not expecting a shootout on Sunday.

While considered Cleveland's No. 1 RB, Chubb has played less than 50 percent of the offensive snaps over the last two weeks and actually had fewer snaps than his backfield mate Hunt in last week's win.

That said, Chubb has made the most of his touches this season, rushing for at least 84 yards in every game and hitting the 100-yard mark last week on 21 carries.

The Chargers are currently ranked 29th.

As mentioned above, with Mayfield banged up, Cleveland is going to heavily lean on its ground game to wear down the Chargers and keep Herbert & Co. on the sidelines. That's going to mean a lot of action for both of Cleveland's backs — so even if Chubb only plays half the offensive snaps, getting to go against this paltry run defense has us licking our chops at a rushing yards total that's below his season average. 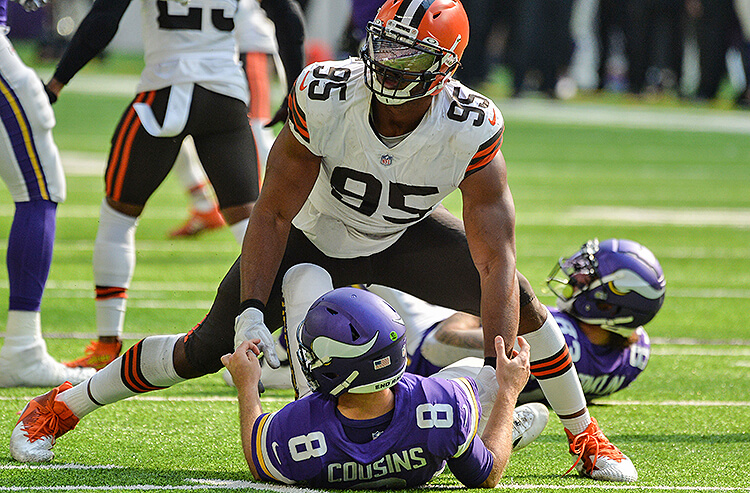 Browns vs Chargers Week 5 Picks and Predictions: Cleveland D, Run Game Will Grind Down the Bolts
Provided by