The Broncos and Steelers meet up in Week 5 in what is a must-win game for both — despite Denver being 3-1 and Pittsburgh 1-3. NFL betting odds have this as a pick'em, but we like the Broncos to trample Pittsburgh in a defensive slugfest.

The Steelers welcome the Broncos to Heinz Field with both teams having unexpectedly contrasting records. Pittsburgh has struggled so far this season with Ben Roethlisberger a shadow of his former self and enter Week 5 with a 1-3 record, whereas the Broncos are 3-1 and are in the thick of a very competitive AFC West.

NFL betting lines have this as a pick’em and it really feels like a must-win for both teams — the Steelers need to start climb from the basement of the AFC North and the Broncos need to keep winning in a division that features the Chargers, Raiders, and Chiefs.

Here are our best free NFL picks and predictions for Broncos vs. Steelers on Sunday, October 10.

The bookies now have this game as pick’em, after opening with the Steelers as 1-point favorites. The total has remained at 40 throughout, making it the second-lowest total of the week. Use the live odds widget above to track any future line movements right up until kickoff and be sure to check out the full NFL odds before placing your bets.

The Under is a combined 8-0 in the Broncos and Steelers games so far in 2021. Find more NFL betting trends for Broncos vs. Steelers.

The Steelers front office welcomed Ben Roethlisberger back for another season believing that his experience was enough to give them a playoff run. However, his body appears to be failing him and this simply isn’t the Big Ben that we’ve been accustomed to seeing throughout the years. In some games, he’s still been efficient and put up reasonable passing yards but he lacks the mobility and deep threat capability that he used to possess.

It’s not just Roethlisberger though: Pittsburgh's offensive line is poor, especially compared to some of the dominant lines it has had in recent years, and despite having a great WR trio in Diontae Johnson, Chase Claypool, and JuJu Smith-Schuster, the Steelers have not been able to replicate the winning start they had last year and sit at 1-3.

The Broncos, meanwhile, have been great so far, although looking at their schedule it’s easy to ask questions. Their three wins came against the New York teams and Jacksonville (arguably three of the five worst teams in the NFL) and they struggled against Baltimore, the sole elite team they’ve faced. Despite that very valid criticism, this is a team on the up — plus they’ve been without WR Jerry Jeudy, who got injured in Week 1.

Plaudits have been given to Teddy Bridgewater, who is clearly an upgrade on Drew Lock and will do a good job until Denver finds its franchise QB, but the real star of the show has been Denver’s defense.

The Broncos are ranked seventh in the league in defensive DVOA and only the Bills have allowed fewer points. Von Miller has been back to his best as a pass rusher but it’s the upgraded secondary that really stands out. Kareem Jackson has been a monster at safety and offseason CB additions — Patrick Surtain II (draft) and Kyle Fuller (free agency) — have combined for 31 tackles and help lead a stop unit that gives up fewer than 200 pass yards per game.

The Steelers are struggling to carve out an identity in 2021 and are in a rebuild, whether they know it or not. Back the Broncos, who are in the ascendency, to take care of business and win this pick’em.

Sixty-seven points. That’s all that the Steelers have scored this year through four games. To put that in context, that’s less than the Jaguars, Giants, and Lions... and tied with the Texans.

The days of the Killer B’s are long behind us and this offense is no longer high powered. In fact, it barely qualifies as "powered" at all. The Steelers have looked even more abject at home, scoring just 27 points in their two games at Heinz Field so far.

The Broncos haven’t been a monster on offense either. They’re still figuring their offense out through injuries and a new QB, although they have vastly outscored the Steelers. Neither side is an offensive juggernaut and it feels obvious that this will be a low-scoring affair.

With the total set at just 40 points, it’s the second-lowest total of the weekend but taking the Under is backed up by stats as well as the eye test.

The Under has landed in all eight of the Broncos and Steelers combined games this year. That’s something that the sportsbooks will be aware of but we have to keep backing the Under here because everything on the field points toward it.

We’re heading to the Broncos ground game for the next prop, but not in a positive way as we’re taking the Under on Melvin Gordon’s rushing yards.

There are two reasons for this. First: Javonte Williams. Gordon has been splitting the carries with the rookie running back but through four weeks it’s Williams who looks like the better back. His movement, ability to cut, and vision look superior to what Gordon can offer at this stage of his career.

He’s rushed for 186 yards, averaging 4.0 yards per carry, and looks like he’ll step into being the lead back for this offense when Gordon likely leaves in free agency next summer — if not sooner. The coaches will ride the hot hand but Williams is, in our minds at least, a better back and will start to see more of the rock.

Secon: It’s still the Steelers' run defense. When it comes to overall defensive DVOA, they sit 22nd in the league, but when you look at rushing DVOA they sit seventh in the NFL. Even if Gordon gets the bulk of the carries, Pittsburgh will do a good job of stopping him from putting up big numbers. 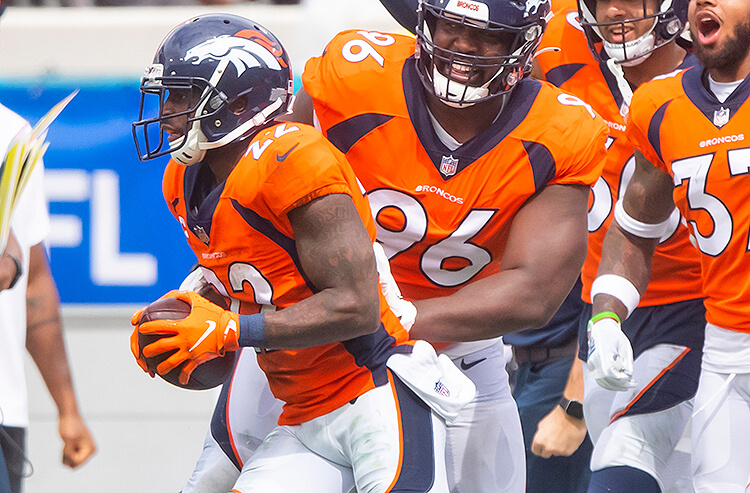