Bears vs Raiders Week 5 Picks and Predictions: Can Vegas Rebound From First Loss?

Justin Fields will make his third Bears start in Las Vegas against the Raiders, where Chicago is a 5.5-point underdog. Check out our full picks and predictions and find out if we like Fields and the Bears to keep it close and cover.

Justin Fields will make his third career start, and first out from under the looming, red shadow of Andy Dalton, against the Las Vegas Raiders as the Chicago Bears head to the desert having embraced the future.

Fields will now be tasked with injecting some life into a 2-2 Chicago team, while Las Vegas tries to rebound from a humbling first loss of the season against the Chargers.

Keep reading for our free NFL betting picks and predictions for Bears vs. Raiders, with kickoff on October 10.

After briefly hitting the board at -4.5 on Sunday evening, the Raiders were 5.5-point favorites following their loss to the Chargers on Monday Night Football and have remained so throughout the week. A total of 45.5 was shortlived, quickly bet down to 44.5 where it has remained as of Thursday evening.

The Raiders' perfect start screeched to a halt last week against a great Chargers team but they return home in a good spot to get right. That's because, while the Bears are at least now interesting with Fields at quarterback, they remain a mediocore team.

The offensive playcalling is, well, just that. Matt Nagy has failed to maximize Allen Robinson through the first month of the season, while Darnell Mooney only emerged from the wilderness a week ago and continued to show why he is an exciting young player. Despite ranking sixth in rushing DVOA, Chicago is the 29th ranked offense by Football Outsiders, because of a passing attack sitting 32nd. Playing Fields is absolutely the right decision for the long-term but in all likelihood, he'll also turn the ball over and get sacked more often than Dalton.

While Las Vegas' secondary is there to be exploited by an arm talent like Fields, the Raiders' front will provide a major boost. Pass rusher Maxx Crosby has made a living out of feasting on terrible tackle play like that of Chicago's, while Solomon Thomas, Darius Philon, and Carl Nassib are capable rushers who can help to clean up against a QB in Fields who can escape a collapsing pocket. And, for as mobile as Fields is, his awareness at this stage leaves a lot to be desired.

The ground game may not be all that favorable to the Bears, either, after David Montgomery suffered a knee injury last week that will keep him out for multiple games. The added emphasis on the ground, as well as play-action and moving pockets, were huge boosts to Fields a week ago and help keep him clean after a brutal first start. With Nagy constantly reminding us of his incompetence, it's tough to have any confidence he'll do Fields any favors with his gameplan.

Chicago's defense, a Top-10 unit in DVOA, has been given a boost by playing the Lions, a bad game from the Bengals, and a Browns team that was content to run the ball for over 200 yards. Its only true test thus far, against the Rams, ended with 312 yards passing allowed in a 20 for 26 day from Matthew Stafford. If the first month of the season is any indication, this is a Bears defense that will maul bad teams and appear medicore vs. good offenses. Unfortunately for Chicago, it doesn't seem like the Raiders are the former.

With the spread below a touchdown and the Raiders playing at home here, trust Las Vegas to cover.

Before the Stormin' Staley's welcomed the Raiders to SoFi and rattled Derek Carr, the Raiders' offense had been among the league's most consistent, averaging 30 points per game and Carr over 400 yards through the air through three weeks. Even after the egg laid on Monday Night Football, Las Vegas' passing game is still ranked 15th in DVOA.

The offense as a whole is weighed down by a terrible running game and, his two-week absence notwithstanding, a commitment to Josh Jacobs, who has played like Jaguars-era Leonard Fournette for the better part of two years and last made a defender miss when he played for the Oakland Raiders.

And yet, such is the importance of a good passing game in the modern NFL, there's little reason to fade the Raiders' offense. They remain a top-half passing attack in DVOA and net yards per drive, are just outside the Top-10 in net yards per pass attempt. Las Vegas can find success against a Bears defense that ranks 10th in pass defense DVOA, as Jon Gruden's offense does a good job of scheming players open and letting Carr run point, provided he isn't pressured. He's unlikely to be here, as an already underwhelming Chicago pass rush (19th in team pressure rate) will be rolling out a hobbled Khalil Mack and Akiem Hicks, if they suit up.

For Chicago's part, Fields can continue to spark the offense as he did last week, with the Bears producing a season-high in points and yardage. Las Vegas' drop-three scheme will give the rookie passer plenty of chances to take off and pick up yardage on the ground, while a depleted Raiders' secondary is primed for the picking. Deep threat extraordinaire Darnell Mooney could have a field day vertically, while the desire to keep everything in front will give Fields and Allen Robinson easy layups underneath.

A couple of scoring drives is all that we'll require out of Fields and the Bears' offense, and the former Buckeye can certainly give us that.

There are many beneficiaries of Fields' insertion under center, from long-suffering Bears fans to the team. There may be no individual primed to gain more, however, than sophomore speedster Darnell Mooney. The wide receiver entered the league as an elite deep threat, with long speed to beat anyone and the technical ability to successfully stack going deep and win before the ball arrives.

After toiling away with mediocre arm talent under center for the first 18 games of his career, Mooney now has a quarterback worthy of his talents to play with. Fields was the best deep-ball passer in his draft class, and after Matt Nagy's coaching failure in Fields' first start, his strengths were played to in Week 4. Fields and Mooney connected on completions of 21, 64, and 32 yards, displaying a blossoming connection that will continue as long as the two play together.

That will certainly be the case Sunday against a Raiders secondary with three hobbled cornerbacks and a strong safety in Johnathan Abram who lacks discipline. Though rookie free safety Trevon Moehrig has been a pleasant surprise, Las Vegas has allowed receivers to get in behind already this season and will again do so against a vertical stretcher as dangerous as Mooney. 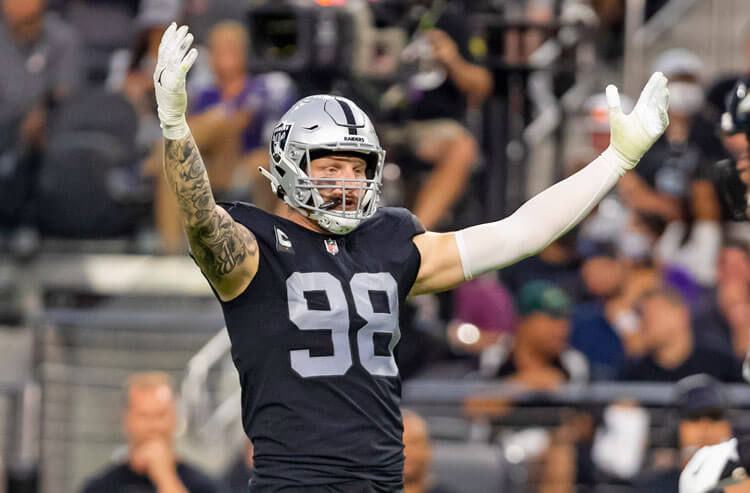 Bears vs Raiders Week 5 Picks and Predictions: Can Vegas Rebound From First Loss?
Provided by