Lions vs Vikings Week 5 Picks and Predictions: Detroit Has No Teeth

Detroit has been struggling all year, and now hobbled, has to face division rival Minnesota as a huge underdog. Find out if there's any pride left in these cats as we break down our Lions vs Vikings picks for Week 5 NFL action.

The Detroit Lions enter Week 5 still looking for their first win of the year as they head to U.S. Bank Stadium to face the Minnesota Vikings on Sunday afternoon. The Vikings only have one victory themselves but oddsmakers are expecting them to add to that tally with NFL betting lines opening Minny as a 9.5-point home favorite.

Here are our best free Lions vs. Vikings picks and predictions for Sunday, October 10, with kickoff at 1 p.m. ET.

Minnesota opened as an 8-point favorite for this contest with the Over/Under at 49. While the total hasn't seen any movement, steam has come in on the home side, pushing the Vikings line to -9.5 as of Thursday afternoon.

The Lions are 1-6 ATS in the last seven meetings between these NFC North foes. Find more NFL betting trends for Lions vs. Vikings.

The Lions look like the worst team in the NFL and are coming off a 10-point loss to the Bears to drop their record to 0-4. The Vikes are fresh off a 14-7 loss to the Browns and are 1-3 SU but could very easily be 3-1 but for a pair of extremely close defeats to begin the year.

Minnesota's Pro Bowl running back Dalvin Cook has been bothered by an ankle injury but says he plans to play on Sunday. Even if the Vikes end up giving plenty of carries to backup Alexander Mattison, they should have little problem shredding a Lions defense that ranks 30th in the league in defensive rushing DVOA.

As for Detroit's offense, while it is easily the worst in the league when it comes to the wide receiver corps, it was expected to be somewhat competitive thanks to the running back, tight end, and offensive line positions.

Well, so much for that. The Lions' two best blockers (Taylor Decker and Frank Ragnow) are both out with injuries, highly-regarded rookie Penei Sewell is doubtful, while reliable tight end T.J. Hockenson and running backs Jamaal Williams and D'Andre Swift are all questionable as well.

The Lions would be among the least talented teams in the league even if they were completely healthy, and now they have to deal with a plethora of key injuries on top of that.

While it is tempting to consider a 9.5-point underdog in a division rivalry game against a 1-3 team, the Lions have been owned in the head-to-head lately. The Vikings have won seven straight games against the Lions, going 6-1 ATS during that span and winning five of those games by double-digits. Take Minny to win and cover at home.

We mentioned how bad the Lions' run defense is and their pass defense hasn't been any better. Detroit also ranks 30th in defensive passing DVOA and ranks last in the league in opponent yards per pass attempt (9.8).

They are especially thin at cornerback, which will be trouble against Minnesota's dynamic duo of Justin Jefferson and Adam Thielen.

As for the Lions, while their offense will no doubt suffer from injuries on the line, it's still a better unit than their defense. Quarterback Jared Goff is nowhere near elite but he's usually capable of stringing together a good half, even if playing well for four quarters seems beyond his limited grasp.

The Vikings rank just 28th in the league in yards per play allowed (6.1) and while they should jump out to a quick lead, don't count out the resilient Lions from putting up points late, even if the game gets out of reach.

With Minnesota going 8-3 O/U in its 11 home games and the Over cashing in seven of Detroit's previous 10 contests overall, take the Over on Sunday.

Goff doesn't exactly resemble Michael Vick when he takes off with the football but he has scrambled (like a chicken with his head cut off) for at least eight rushing yards in three of four contests this year. That includes Week 2 against Green Bay when he picked up 46 yards on four carries.

Goff will doubtless face pressure up the middle this week with Detroit's Pro Bowl center Frank Ragnow now on the IR with turf toe.

The Vikings defense has struggled in some areas this season but their pass rush is strong, ranking fourth in the league in QB hurries per dropback. Expect that pass rush to force Goff to run with the ball and take the Over 7.5 on his rushing yards total. 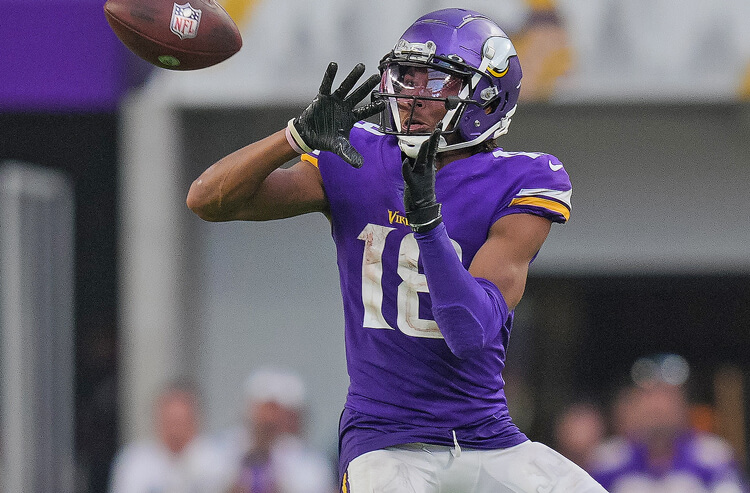 Lions vs Vikings Week 5 Picks and Predictions: Detroit Has No Teeth
Provided by