Get ready for some scoring struggles as Jacksonville hosts Atlanta in Week 12. It may be tough to trust either side, but we've got the angles you'll want to scope before this weekend's NFL betting with our Falcons vs. Jaguars picks.

The Atlanta Falcons might have double the wins of the Jacksonville Jaguars — four compared to two — but, make no mistake, these are two of the worst teams in the NFL.

Can either team find something to make their fans smile as the season end draws closer? Read our NFL picks and predictions for the Atlanta Falcons vs. Jacksonville Jaguars.

We’ve seen movement in the Falcons at Jaguars game already. The Jaguars opened as 1-point underdogs but that’s gone out to 2 points at the time of writing. The game total has also dropped from 48 to 46 since opening.

The Falcons are 1-6 ATS in their last seven games on grass. Find more NFL betting trends for Falcons vs. Jaguars.

Falcons vs Jaguars picks and predictions

This Sunday sees plenty of great matchups in the NFL, with big teams meeting each other and tough divisional games also lighting up the schedule. Then there’s the Falcons at Jaguars, an ugly duckling of a game, but one which could be far better than it looks on paper.

We won’t be seeing either of these teams in the playoffs, but they’re both building towards the future: the Jaguars with Trevor Lawrence, their franchise QB for years to come, and the Falcons looking to youth despite going back to veteran QB Matt Ryan.

Lawrence hasn’t lit up the league as many expected and there are already people questioning whether the Jaguars have ruined the former Clemson man. Over the past three games, Lawrence hasn’t had an interception, which blighted the first few games of his career, but he’s also not thrown a single touchdown pass. That’s a far cry from the gunslinger we saw in college, although this offense isn’t helping him. Last week was the second consecutive week in which Lawrence was down 17-0 before starting his third series. There’s only so much he can with an offensive line that can’t protect him regularly and a receiver corps that can’t catch, even when he’s able to create.

Rated 25th in the DVOA this Jaguars offense is actually rated higher than the Falcons, who sit 31st in the league. That’s may seem surprising given that Matt Ryan has passed for almost 300 more yards and seven more touchdowns, but the Jaguars’ ground game has been quite good when relied upon, with James Robinson continuing to excel.

The Falcons have struggled in the post-Julio Jones world, with Calvin Ridley missing the majority of the season through personal issues, leaving a receiving corps led by rookie Kyle Pitts. Beyond the rookie tight end, it’s bleak, with Russell Gage, Tajae Sharpe and Olamide Zaccheaus the three starters. Despite that mediocre cast of players, you’d imagine they’ll find some success against this Jaguars secondary, but is it enough to negate their own defensive issues?

Both of these two defenses are bad. The Jaguars are 26th in weighted defensive DVOA a full five spots ahead of the Falcons who are 31st. Both QBs will get opportunities to put up good numbers with neither secondary having much talent.

Both offenses are dire, but the Jaguars defense, while still bad, is superior to that of the Falcons. When it comes down to a game this tight, effectively a coin flip between two bad teams, you need to be sensible. You can’t be hugely confident backing either team, so back the team with the better defense and a two-point head start.

The public money has seen this line drop two points already from 48 to 46 and it’s with good reason. The Under is 5-0 in the Jaguars’ past five games overall and neither of these teams have been high scorers recently. The Jaguars have scored a combined 43 points in their past four games and, as mentioned above, we’ve not seen much from Trevor Lawrence in that time.

In the same time frame, the Falcons have also scored 43 points, and that’s heavily skewed from a 27-point showing against the Saints. In their past two, they haven’t scored a touchdown, managing just three points in the process. Following the trend makes sense here when we can expect the scoring to be low.

It’s not often you get a chance to back a points total wager when the current form is so clearly trending in one direction. As you’d have read above, these two teams have both averaged under 11 points per game in their past four games. Neither offense is firing, with both Matt Ryan and Trevor Lawrence failing to score a passing touchdown in the past two weeks, and both teams missing their best wideouts in Calvin Ridley and DJ Chark.

Sure, you can point at both teams having poor defenses, which could lead to more scoring, but when both offenses are having struggles like this you simply need to bet smart and follow the trend. I expect the real points total to be well Under the 46 point threshold, so I’ll be betting an alternate line, with Under 44 points available at +110. It’s a little bit of a tastier price and well within reason. 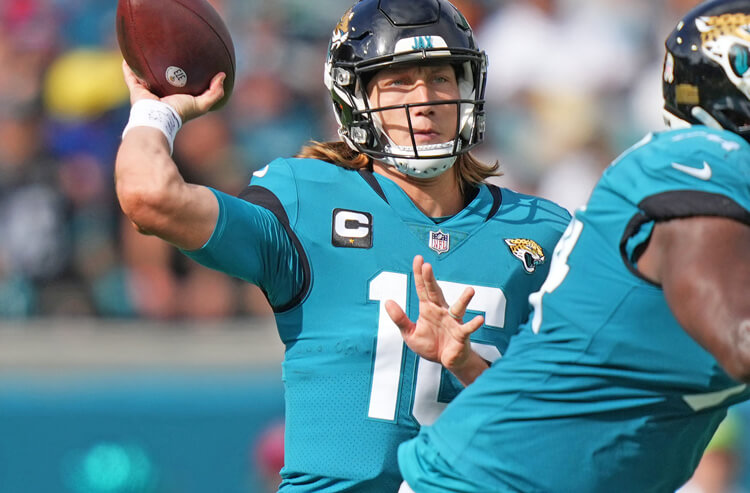