Steelers vs Bengals Week 12 Picks and Predictions: Earning Their Stripes

The Steelers have ruled the AFC North and haunted the Bengals for years but the tide has started to turn. Cincinnati would love to mark that change with a clean sweep over Pittsburgh this year — find out if we think they can with our NFL betting picks.

The Pittsburgh Steelers and Cincinnati Bengals will renew their AFC North rivalry Sunday, in what will be the second meeting of the season after the Bengals went into Heinz Field and escaped with a 24-10 victory in Week 3.

Can the Bengals build on last week’s win over the Raiders and keep pace with the division-leading Ravens, or will the Steelers shake off a heart-breaking loss at SoFi last week and pick up their first win in three games?

Find out in our free NFL picks and predictions between the Steelers and Bengals.

The Bengals were -4 on the look-ahead and opened up at -3.5 after Week 11's results. That number stayed consistent until hitting -4 on Thursday. This spread closed at PIT -2.5 in Week 3 after opening at 4. The total has not moved after opening at 45.

The Under is 5-1-1 in the last seven meetings between the Steelers and Bengals. Find more NFL betting trends for Steelers vs. Bengals.

Steelers vs Bengals picks and predictions

The Bengals will look to take care of the Steelers one more time this year after beating their division rival 24-10 back in Week 3. The Steelers closed as 2.5-point favorites, but were outgained by 2.0 yards per play and lost the turnover battle. Pittsburgh's offense had 11 possessions that went punt, punt, interception, punt, touchdown, punt, INT, missed field goal, FG, and then two turnovers on downs. The Steelers also committed 10 penalties for 73 yards. It was the first time the Bengals have beaten the Steelers in Pittsburgh since 2015.

Ben Roethlisberger was limited at practice this week but is going to be under center on Sunday. He threw the ball 58 times in the last meeting but gained just 4.8 yards per play and struggled to find anything downfield vs. the Bengals’ No. 9 pass defense (EPA). The Steelers’ offense doesn’t come into this Week 12 meeting in the best form as it’s gaining just 322 total yards per game over its last three, which is a bottom-10 mark. Pittsburgh did score 37 points last week and mounted a hell of a comeback, but it scored just 10 points over the first three quarters versus the Chargers’ bottom-four defense.

The Bengals bounced back last week after losses to the Browns and Jets in consecutive weeks. They held the Raiders’ anemic offense to a single TD and 278 total yards of offense. Cincy dominated possession as the Raiders had the ball for just over 22 minutes and converted just one of seven third downs.

If the Bengals were -2.5 on the road last week versus the Raiders, perhaps this -4 is a little short despite the Bengals not being 3-point or more favorites versus the Steelers once over the last five-plus seasons. Pittsburgh closed at +6 at the Chargers last week and we rank the Bengals and Chargers in the same tier.

Both teams have been profitable to the Under on the season and the H2H has produced just one Over in the last seven meetings. Both teams sit in the bottom-10 in yards per play over the last three weeks despite games against the Chargers, Jets, Lions, and Bears.

Looking at explosive plays, the Bengals’ defense ranks in the Top-10 in rushes of 10-plus yards allowed but struggles with long passes, as it’s surrendered 40 explosive passes this season (fourth-most). Luckily for Cincy, Pittsburgh’s biggest weakness is the long pass, as it's completed just 29 passes of 15 yards or more, which ranks 22nd in the league. Diontae Johnson didn’t suit up in the last meeting, but Big Ben had Juju Smith-Schuster and all of his other receivers and he finished with 318 yards passing — but it took him 58 passes to get there.

The Bengals’ offense took three quarters to get going last week, as the score was 13-6 entering the fourth quarter against the Raiders. Joe Burrow looked to hurt his surgically-repaired knee in that game but managed to play through it. The Bengals were gifted a ton of yards by Las Vegas penalties and only managed two red zone trips. It wasn't a pretty effort from Burrow and the Cincy offense.

Joe Mixon will likely eat Sunday as he had 30 (!) carries last week. This is not a fast Cincy offense, as it sits 28th in plays per game. The Steelers could also get huge additions on defense if Joe Haden and T.J. Watt (both limited on Thursday) can suit up. Cincy managed just 288 total yards in the first meeting.

We think people will be looking at last week’s final scores without seeing the struggles both offenses had for the majority of those games and be wanting to hit the Over; not us.

It's a huge divisional game with two teams who love to run the ball. The total hasn’t moved so we aren’t late and getting a bad number here, either. The recent history also favors the Under.

The last meeting saw a ton of penalties and just 113 plays, which is below the league average. Both offenses sit in the bottom half in EPA/play while the Steelers’ offense ranks 31st in success rate, ranked above the Texans and below the Lions.

None of the last seven meetings have produced more than 47 points and we’re comfortable hitting this rivalry game on the Under with a number above 44. 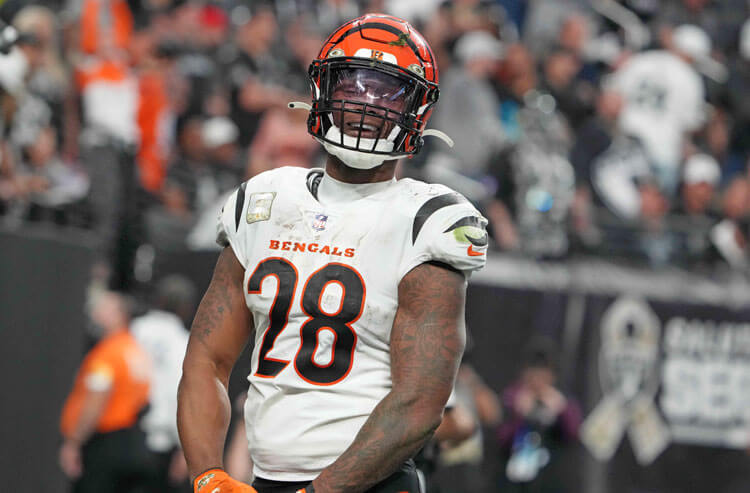 Steelers vs Bengals Week 12 Picks and Predictions: Earning Their Stripes
Provided by