In a battle of 2-8 teams, the Jets are getting Zach Wilson back and the Texans are coming off maybe the most shocking win of the NFL season. Find out what to make of this matchup in our Jets vs. Texans picks and predictions.

A couple of 2-8 teams meet on Sunday as the New York Jets travel to Houston to face the Texans. The Jets are on a three-game winless streak while the Texans just overcame the Titans in the biggest shock of the NFL season so far. What’s going to happen when these two go head-to-head at NRG Stadium on Sunday? Read our NFL picks and predictions for the New York Jets vs. Houston Texans to find out.

There’s been only the slightest of line movements so far with the Texans going from 3.0 to 2.5-point favorites. We’ve also seen the points total rise marginally from 44 to 44.5 since opening. Use the live odds widget above to track any future line movements right up until kickoff and be sure to check out the full NFL odds before placing your bets.

The Over is 6-1 in the Jets' last seven games overall. Find more NFL betting trends for Jets vs. Texans.

Jets vs Texans picks and predictions

Both of these two teams sit on 2-8 records but it’ll be the Texans who come into this on a high. Last Sunday the Texans beat the Titans in a 22-13 win which is the clear shock of the season so far. Nobody expected the Texans to go into Tennessee and leave with a win, let alone to win in the style they did.

Even looking at the stats, the scoreline doesn’t really make sense. The Texans only had 190 scrimmage yards, 107 of which came through the air. That didn’t come close to the Titans’ total yardage, who outperformed Houston in nearly every metric. It was a lost fumble and four interceptions that ultimately cost the Titans. The Texans’ defense has quietly been very effective this year, and for a team with a 2-8 record, you’d never expect any facet of their team to perform so well. They may not be creating headlines but the Texans’ defense is ranked 10th in defensive DVOA, ahead of the likes of the Niners and Vikings, teams associated with good defense.

Good defense certainly isn’t something that you’d associate with the Jets. Despite Robert Saleh’s history in building the Niners’ great defense, his team sits bottom of the league in defensive DVOA and hasn’t really performed as people might have thought this year. That gulf in class is apparent and the Jets will have to turn up on offense in order to secure their third win of the season.

When you look at offensive DVOA, it’s a very different situation and almost a mirror opposite. The Texans sit rock bottom in that table with the Jets eight slots higher. In their past four games, this Jets team have put up 98 points but have shipped 145 points, including giving up 45 points on two separate occasions to the Bills and Colts.

We’re set to see Zach Wilson under center for the Jets with the rookie returning after some time out with injury. In his absence, we’ve seen Mike White and Joe Flacco both take the reins, but both will be missing this game with White out (COVID) and Flacco also likely to miss this game (COVID protocols). Wilson struggled before his injury but in recent meetings with the press, he’s said all the right things about doing the simple things or “boring football” as Robert Saleh describes it. There is clearly potential with Wilson and the time away from the team should help him, especially when the rest of the offense has shown improvements. The offensive line looks better than it did earlier in the season and Elijah Moore has broken out and looks like a potentially elite WR.

Picking a side in this game is difficult but I think we saw the very best the Texans can do last week and lightning rarely strikes twice. We know what the Texans are, a solid functional defense with a horrific offense. There’s a lot more unknown about the Jets and they’ve been improving throughout the season, even if they have lost three games on the bounce. I’d lean toward backing the Jets and the returning Zach Wilson to create a splash and cover against the Texans.

The Jets’ offense has averaged over 24 points per game across their last four contests, facing four teams inside the Top 10 of defensive DVOA in that time. Now they face the Texans who are tenth and the Over should land. The Texans have scored 58 points in that timeframe, but now they’ll face the weakest defense that they’ve come up against all year. Tyrod Taylor isn’t a brilliant quarterback but he’s capable of making plays and he should be able to get this Texans team into the endzone on multiple occasions.

Elijah Moore is the truth. The former Mississippi receiver, drafted 34th overall in this year’s NFL Draft, took a little while to find his footing but has exploded recently. In the past three weeks, we’ve seen Moore score four touchdowns and become the lead target for the Jets.

In those three weeks, Moore has become WR6 in receiving yards per game (89.7 pards per game) and WR13 in targets (8.33 targets per game). There have been question marks about whether he’ll be able to sustain this level with Zach Wilson returning, with some people observing that he’s only found his feet since Wilson has been away from the team. I think it’s unfair to paint his breakout as a byproduct of Wilson’s absence - this is a player who has gained confidence and is displaying some of the ability we saw in college.

We’ll be backing the Over on Elijah Moore’s receiving yards against the Texans and I’m bullish on this one landing. 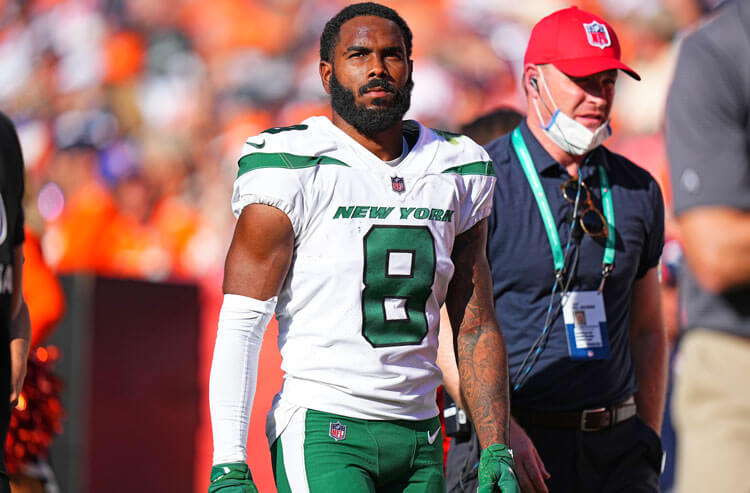 Chargers vs Bengals Week 13 Picks and Predictions: Cincy Run Game Will Be Too Much For Bolts
Jason Logan | Dec 2, 2021

Eagles vs Jets Week 13 Picks and Predictions: Back Philly's Run Game in NY
Jason Logan | Dec 2, 2021
About Us
Contact Us
Careers
Our Team
Brand
Testimonials