The G-Men are in turmoil and hoping to revamp their offense under a new OC on the fly. Find out if it's enough to clip Philly's wings as we break down our NFL betting picks for Eagles vs. Giants in Week 12.

The Philadelphia Eagles and New York Giants are headed in opposite directions in the NFL Week 12 rankings and clash in East Rutherford this Sunday.

The Eagles are 3.5-point NFL betting road favorites riding the momentum of a two-game streak – the first time this team has won consecutive games this season. The Giants, on the other hand, are playing on a short week after getting rolled at Tampa Bay on Monday and just fired offensive coordinator Jason Garrett after another lackluster effort on that side of the ball.

Check out our NFL free picks and predictions for Eagles at Giants on November 28.

The Eagles were 3-point chalk on the lookahead line and jumped to -3.5 before New York loss at the Bucs. That spread has stayed steady for the most part. The total opened as tall as 47 points and has dropped as low as 45.5.

The Under is 19-6-1 in Giants’ last 26 games overall. Find more NFL betting trends for Eagles vs. Giants.

Eagles vs Giants picks and predictions

Despite having nearly all of their top skill players back in action for Week 11, the Giants crapped out just 215 total yards of offense against the Buccaneers. Quarterback Daniel Jones completed only 23 of 39 throws, and on those passes he did complete, New York gained a measly 6.5 yards per catch.

It was the sixth time this offense has failed to score more than 20 points in its 10 outings, and the final straw for Garrett, who lasted just 26 games in New York. Freddie Kitchens picks up the playsheet for the remainder of the season, and while his aggressive approach is a shakeup from Garrett’s antiquated offense, the G-Men don’t have long to implement that 180 in philosophy.

The Eagles are a very tough defense to gameplan for on a full week with a full staff. Philadelphia has really thrown the kitchen sink at opponents this season, mixing in three, four and five-man fronts while also utilizing its speed with dime sets and bringing extra pass rushers from the secondary – which killed the New Orleans Saints in last week’s 40-29 victory.

The Giants do have better options at the skill positions than New Orleans had in Week 11, but with piss poor protection, who knows if Jones will have time to find those targets. New York allowed its QB to suffer two sacks and nine QB hits on Monday and ranks out 25th in pass block win rate (54%) on the year.

Philadelphia’s defense has played its best ball away from home, with 17 of its 18 total sacks on the season happening as a visitor. The Eagles own a points per play margin of +0.146 on the road (fifth-best) and limit host teams to less than 20 points per game, trickling down to a 4-2 ATS mark away from the City of Brotherly Love.

I am wary of a potential letdown spot from Philly, coming off a big win over NOLA and after barfing up 22 points in the fourth quarter of that game. But with the Giants picking up the pieces of their playbook on a short week, we’ll take the Eagles and the momentum.

Despite that awful performance on Monday night and the shake-up at coordinator, Philadelphia must respect this Giants attack, which has some talented playmakers on the depth chart. With that in mind, expect more of the ground-and-pound approach from this Eagles offense.

Philadelphia’s RPO attack under Jalen Hurts has established itself as a dominant rushing attack the past month, ranking sixth in EPA per rush (+0.015) behind a deep running back corp and Hurts’ ability to break off gains with his legs.

Jordan Howard runs the risk of missing Week 12, but the Eagles just returned top RB Miles Sanders, which should keep the wheels turning and the clock moving, as Philly chewed up more than 37 minutes of possession versus the Saints’ top-rated rushing defense and sits eighth in average TOP (32:47) over the past three games.

The Giants defense sits 30th in Run Defense DVOA at Football Outsiders as well as 30th in EPA allowed per rush (-0.009) on the season. That’s kept this New York defense on the field longer than all but two NFL teams. But beyond their issues with the run, the G-Men have done some things right on defense, such as third-down stops (38.93% - 11th) and red-zone defense (52.38% TD rate – 8th).

The Under has come through in four of the last five matchups between these NFC East rivals and the Giants have played below the total in four straight heading into Week 12.

For all the running the Eagles do, there will be an opportunity to go over the top when the Giants defense gets sucked in to stop the rush.

New York has faced a few RPO-heavy opponents this season and has been torched by big gains from home-run hitting receivers. It allowed 107 yards and a touchdown to Washington WR Terry McLaurin in Week 2, watched Dallas WR CeeDee Lamb post 84 yards and a score in Week 5, and got burned by Chiefs speedster Tyreek Hill for 94 yards and a TD in Week 8.

Philadelphia has been getting more comfortable with deeper throws from Hurts, who is starting to cook up that classic Alabama chemistry with rookie wideout DeVonta Smith. He’s been targeted 18 times for 13 catches and a total of 243 yards receiving the last three games, with big plays of 28, 33, and 38 yards along with three touchdowns. The former Heisman winner will have his chances to do more damage in Week 12. 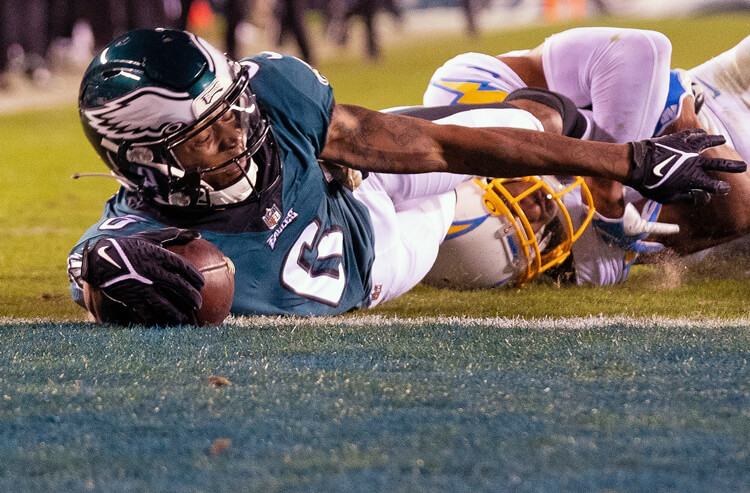 Eagles vs Giants Week 12 Picks and Predictions: Eagles Soar in Week 12
Provided by