Buccaneers vs Colts Week 12 Picks and Predictions: Battle in the Trenches

The Buccaneers and Colts present a great matchup on Sunday, with elite position groups clashing in the trenches. One man could be the difference as he follows up a five TD day — find out more with our NFL betting picks.

Whisper it quietly but the Buccaneers’ trip to Indianapolis to face the Colts could end up being the best game this Sunday. The Bucs got back to winning ways on Monday Night Football and they’ll need to be at their best against a Colts team that dismantled the Bills last week.

Don’t miss our NFL picks and predictions for the Tampa Bay Buccaneers vs. Indianapolis Colts.

Since opening the Bucs have moved from 2.5-point favorites to 3-point favorites. In that same timeframe, we’ve seen the points total jump from 51 to 53.

The Colts are 4-0 ATS in their past four games as underdogs. Find more NFL betting trends for Buccaneers vs. Colts.

Buccaneers vs Colts picks and predictions

Sunday’s NFL slate features a host of great matchups but it’s this game that could be the very best. Tom Brady and the Buccaneers go into Indianapolis to face Carson Wentz and the Colts, and it could be an explosive game.

The Buccaneers beat the Giants by 20 points on Monday Night Football but it wasn’t the most impressive performance last weekend. The Colts’ 41-15 victory over the Bills was a demolition and it showed a team starting to find its feet. The defense was dominant, the offensive line was destroying everything that the Bills could throw at it, and Jonathan Taylor went nuclear scoring five touchdowns.

Everything the Colts do, including the great performances of Taylor, is based around that offensive line. It’s one of the best lines in the NFL and the way that they can dominate a defense is incredible to watch. Quenton Nelson has become a rockstar, a rare offensive line talent who is pure box office to watch. It’s not just him, though. Braden Smith and Ryan Kelly have been exceptional and even Eric Fisher looks great. When you have the big boys up front able to give the QB time to throw or open running lanes for Taylor, then there’s always going to be problems. A battle against the Bucs’ defensive line, featuring Ndamukong Suh and potentially Vita Vea, is a mouth-watering proposition and what happens in the trenches will go a long way to deciding this game.

The Bucs are ranked seventh in defensive DVOA, two spots ahead of the Colts, and both defenses will need to be on top form to win. We’ve already described how the Bucs’ defensive front will need to lock down the Colts offensive line but when Brady has the ball, it’s essential that the Colts pass rush can cause him problems, and the secondary will need to step up with the majority of Brady’s favorite targets likely to be on the field.

It says a lot about this game that, despite Brady and Wentz being under center, the most important thing about will be the defenses. Both of these defenses will have an opportunity to win this game for their team.

For my money, it’s the Colts who are the team to beat. They started the season slow, in part down to injuries to their offensive line and a very tough schedule, but in recent weeks they have looked incredibly scary. They’re in form and capable of dominating against any defensive talent that the league has to offer. If the line can handle Suh and Vea, then the Colts win this. With Vea being questionable to play you have to favor the Colts, with some doubt over his ability to be at his best even if he does play.

Once this offense gets rolling they’ll be hard to stop. The Colts have the best offensive line in the sport and we’ll be hoping that line helps us cover here.

The total of 53 points is the biggest on Sunday’s slate, which gives you an idea of what we people are expecting. These are two strong offenses and it makes sense that the books will be expecting high scoring. For me, though, I can’t see such high scoring when both teams have such brilliant defenses.

These two units allowed just 25 points combined last week to the Giants and Bills and when they’re playing this well, it’s hard to see this game becoming a shootout. The Under is the play here, so lock that in.

The Buccaneers have the best rushing defense in the league. They’ve only allowed an average of 78.4 yards along the ground per game, over 10 yards less than the closest team, the Baltimore Ravens.

They’ll be up against Jonathan Taylor, the NFL’s rushing yard leader and the man who scored five touchdowns last week. Despite that incredible rushing defense, we’ll be backing the former Wisconsin man to go Over his 79.5 rushing yard total. We’ve already discussed the possibility that Vea might not play, which would be a huge boost for this bet, but even if he played the Over still makes sense.

We all saw what Taylor did last Sunday and although he won’t score five touchdowns again this week, he should put up serious numbers along the ground. Don’t forget the Bills were among the best rushing defenses until they got run all over last week.

Taylor has now tied the NFL record of consecutive games of 100 scrimmage yards and a rushing TD. His eight games draw him level with LaDainian Tomlinson and Lydell Mitchell, which shows just how well he’s performing at the moment. Taylor also has more runs of 30+ yards than the rest of the NFL combined. That offensive line only needs to open up a good running lane and Taylor is able to break off a huge run.

The combination of a dominant offensive line and a speedy, strong running back is hard to beat, and we simply have to take the Over on Taylor rushing yards, even against this great defense. 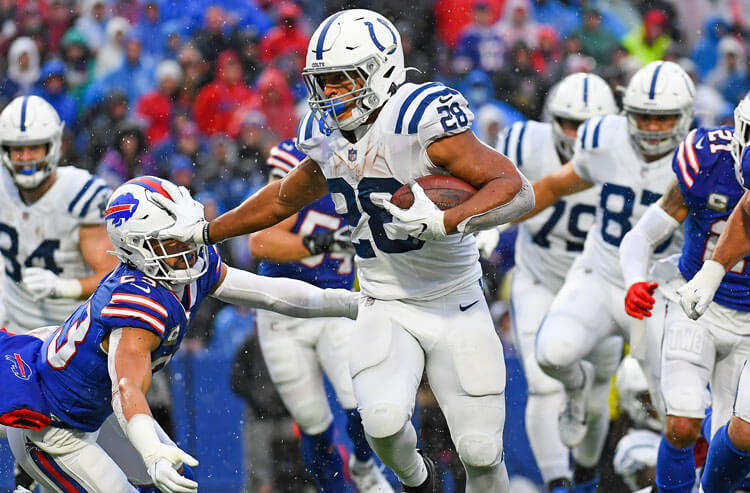 Buccaneers vs Colts Week 12 Picks and Predictions: Battle in the Trenches
Provided by