A potentially great game between the Titans and Patriots is dimmed by Tennessee's injury woes on offense. The hope around a new-look New England team, however, is bright as ever as our NFL betting picks break down.

The New England Patriots will be looking for their sixth straight win (SU and ATS) Sunday when they host the banged-up Tennessee Titans as 6.5-point favorites. The Titans had their six-game winning streak snapped last week with a loss to the Texans, while injuries to skilled positions are stacking up.

Can the Titans’ offense find an identity without Derrick Henry, Julio Jones, and possibly A.J. Brown, or will the Patriots continue to be successful with a great running game that compliments a No. 5 defense by success rate? Is this a perfect overreaction game?

Find out in our free NFL picks and predictions between the Titans and Patriots.

The Under is 4-0 in the Patriots’ last four home games vs. a team with a winning road record. Find more NFL betting trends for Titans vs. Patriots.

Titans vs Patriots picks and predictions

The New England hype train is running wild heading into Week 12. Bill and the boys have ripped off five straight wins and covered in each of them. Not only are the Pats 5-0 ATS in those games but the wins have come by an average of 21.7 points. That is nearly five straight, no-sweat wins, but is the proverbial bubble about to pop for the Pats with the Bills on deck for next week? We’re not so sure.

The Titans are absolutely decimated at skilled positions and could be down their top two running backs, top two wide receivers, and starting tight end heading into a matchup against a New England defense that has allowed just 50 points over its last five games. Bill Belichick’s defense is going to make life miserable for the Titans' offense, which comes into this meeting already struggling at 4.5 yards per play over its last three. Beating this New England Patriots defense that ranks No. 4 in success rate with replacement-level players at Gillette Stadium is a tall task. New England could score 20 points and still cover in this spot.

Also in New England’s favor is the turnover battle. Ryan Tannehill has thrown exactly one touchdown per game in his last three but has totaled five interceptions and has three fumbles (zero lost). Tennessee as a team has turned the ball over six times in its last three and could struggle with possession, as the Pats are averaging 2.7 takeaways since Week 9 and rank sixth in QB pressure rate at 26.6 percent. They face a Titans O-line that has allowed the fifth-most sacks this year.

We’re already leaning on the Pats at -6.5 and haven’t even mentioned the offense. There isn’t anything flashy about it, though. Mac Jones makes smarts passes and has just two picks over his last five games. Multiple running backs have come in and out of this lineup and found success for a running game behind a top-tier O-line. The Pats also just got their lead runner back last week in Damien Harris. The Titans' defense is an average unit but might be facing some short fields with their offense projecting to struggle with a team total of 17.5 points.

With an offense that will feature receivers Nick Westbrook-Ikhine and Chester Rodgers and running backs D’Onta Foreman and Dontrell Hilliard, we aren’t backing this Titans team even with 6.5 free points. This line might seem high, but New England was a 7-point road favorite last week in Atlanta while the Titans couldn’t even win straight up as home favorites against the Saints and Texans — two of the worst offenses in football.

This total was 46.5 on the look-ahead and has fallen to the key number of 44. Combined both teams are an even 11-11 O/U on the season and it will be tough for this game to pass through 44.

Offensively, Jones and the Pats are averaging a healthy 31.3 points per game, which came against the Falcons, Browns and Panthers — two teams in the top-seven in success rate. However, the Pats’ offense sits 14th in yards per game over that stretch and has benefited from a terrific defense that has been giving them short fields from turnovers (seven in the last three games) while holding opponents to an incredible 18 percent third down conversion rate. That’s right, the Patriots’ defense is holding opponents to 18 percent on third downs over the last three weeks and with a weak-looking Titans offense, we aren’t seeing this trend changing.

Tannehill and the Tennessee offense are converting third downs over the last three games at a 33 percent rate and possibly without Jones, Brown, and Geoff Swaim, this number could get worse before it gets better.

We’d feel more comfortable with taking the Pats’ team total Over (26.5) instead of the game total. Any gains on the Tennessee offense could easily be erased by a Tannehill sack as he has been taken down more than any other QB in the league.

The Titans’ defense shouldn’t be short-changed either, as they sit in the middle of the league in points and yards per game and rush and pass EPA. They are strong at all three levels, and Jeffrey Simmons and Harold Landry have combined for 17.5 sacks this season.

The total is more of a lean than a play for us, as there just aren’t enough playmakers on either offense to push this needle to the Over.

Tannehill, Foreman (who is questionable), Hilliard, Westbrook-Ikhine, Chester Rogers, and Anthony Firkser. That’s what Tennessee is working with on Sunday against an elite defense, with confidence, that can get pressure and cause turnovers.

There are so many scenarios where we can see this nameless Tennessee offense go backward and give a short field to Jones and the offense. If Tannehill is forced to play catch-up, things could get really ugly, because this New England defense is relentless and doesn’t give up big plays.

New England is averaging 10 points allowed per game over its last five games, dating back to October 24. The combination of Cleveland, Atlanta, and Carolina scored a total of one TD versus New England over the last three weeks, while Tennessee has managed under 300 yards of offense per game since Week 9. 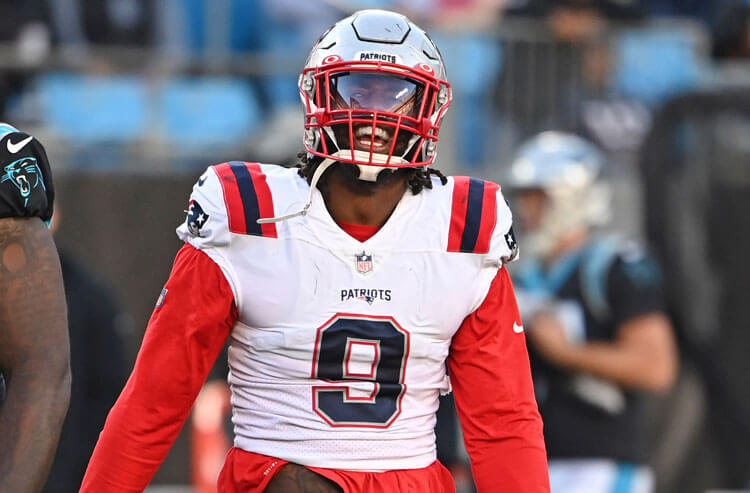 Buccaneers vs Colts Week 12 Picks and Predictions: Battle in the Trenches
Sam Farley | Nov 26, 2021
About Us
Contact Us
Careers
Our Team
Brand
Testimonials