Chiefs vs Washington Week 6 Picks and Predictions: KC Starts to Turn Things Around

Kansas City's arrowheads haven't exactly been striking sharp this season. As the reigning AFC champs try to claw their way out of the division basement, find out how to get the best Week 6 value with our Chiefs vs. Washington picks.

The Kansas City Chiefs are coming off a 38-20 loss to the Bills at home last Sunday that sent the reigning AFC champs to 2-3 SU (1-4 ATS) on the year and knocked them down on most power rankings. On Sunday, they travel to take on the Washington Football Team, but as 6.5-point favorites and 2-8 ATS in their last 10, are the Chiefs still being overvalued?

Here are our free picks and predictions for Chiefs vs. Washington for Sunday, October 17.

The Chiefs were -6 on the look-ahead and opened at the same number after Sunday’s defeat. They have since moved to -6.5 with a handful of books moving to the -7. The total sits at 55 and hasn't seen much movement.

The Over is 4-0 in Washington’s last four games overall. Find more NFL betting trends for Chiefs vs. Washington.

Trusting the Chiefs and, more accurately, their defense is not an easy thing to do. They hosted Buffalo as 2.5-point favorites last week and allowed 8.1 yards per play while Josh Allen only needed to complete 15 passes to amass three TDs and 300-plus yards. They didn't cover.

In fact, Kansas City has failed to cover in 13 of its last 16 games dating back to Week 10 of last season. However, just two weeks ago, the Chiefs opened as 5.5-point favorites on the road versus the Eagles (closed at -7.5) and covered comfortably 42-30 thanks to five red-zone TDs versus a decent Philadelphia defense. If you value Philadelphia as a better team than the WFT, then perhaps the 6.5 points is a little short. This week’s line is very similar to that KC at PHI matchup.

The Chiefs’ O-line enters this match banged up, as starter Joe Thuney broke his hand last week and is doubtful for Sunday. This injury is on top of RB Clyde Edward-Helaire hitting the IR, while Tyreek Hill is also questionable with a pair of DNPs this week. However, Washington is also dealing with injuries to key players, as Curtis Samuel is likely out after re-aggravating a previous groin injury,  and TE Logan Thomas is still sidelined.

The Chiefs still lead the league in offensive success rate and EPA/play. Coming off a big loss might motivate Patrick Mahomes a little more and with all the talk about how bad the Chiefs’ defense has been, let's not forget that Washington’s once-feared defense now ranks 30th in defensive success rate.

Neither of these defenses is good, but Washington QB Taylor Heinicke ranks just two spots ahead of Ben Roethlisberger in ESPN’s QBR while the offense ranks 20th in success.

We are on the -6.5 as many books have moved to the -7, which is obviously a substantial move.

This total sits at 55 and is the biggest number that Washington has seen all season. Ron Rivera’s club hasn’t seen a closing total above 47. Nevertheless, both these clubs are in the bottom-three in defense success rate and touchdowns allowed per game. The real question is can the Kansas City offense put up enough points up without CEH, key pieces to the O-line and possibly Tyreek Hill?

The Chiefs have enough depth at the RB position to overcome the injury to CEH, as Darrell Williams and Jerrick McKinnon are solid back-ups. Washington is giving up over 200 yards per game to opposing WRs and Mecole Hardman and Byron Pringle are decent options versus the Washington secondary that boasts three starting DBs with negative grades, per PFF.

Another big part of looking at this Over is if Heinicke and the Washington offense can string together some points. Washington put up 34 points at Atlanta two weeks ago without a single takeaway. The Falcons have a very similar defensive success rate as the Chiefs. WFT also put up 22 points against a Top-10 Saints defense despite Heinicke not throwing for a TD.

Additionally, both teams love giving the ball away, with Washington averaging 1.4 turnovers per game and Kansas City sitting at 2.2. Combined, both teams are 8-2 O/U and we’re taking the Over on the board’s highest total of the week. Last season, at least 55 or more total points were scored in 29.4 percent of all games.

Washington TE Logan Thomas is still out meaning Ricky Seals-Jones should see more than 90 percent of the snaps for the third straight week. He saw the second-most targets last week (nine) and three of those were in the red zone where he caught one scoreless ball. RSJ has become a big part of this team’s passing attack and has a salivating TD matchup with the Chiefs in Week 6. Terry McLaurin spent Friday with the trainers while Curtis Samuel is week-to-week.

Buffalo TE Dawson Knox scored a 53-yard TD versus the Chiefs last Sunday night while Philadelphia’s Dallas Goedert went 5/56/1 in Week 4. We keep saying it: safety Daniel Sorensen is one of the worst TE coverage defenders in the league and has allowed 16 receptions on 20 targets this season.

Kansas City is a great spot to bounce back after last week’s loss which should keep Washington QB Tyler Heinicke in passing mode on Sunday. Taking a TD prop in a game with a 55-point total is also an advised move. 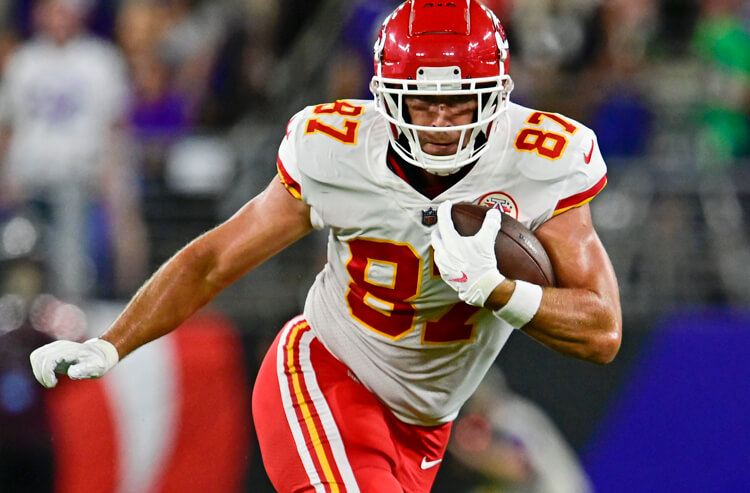 Chiefs vs Washington Week 6 Picks and Predictions: KC Starts to Turn Things Around
Provided by