One of the best rivalries in NFL betting picks up again in Week 6 when the Packers visit the Bears. This rivalry has been a little one-sided lately, with Matt LaFleur 4-0 ATS against Chicago — and we think the Pack make it five straight on Sunday.

The Green Bay Packers (4-1 SU/ATS) and Chicago Bears (3-2 SU/ATS) will renew their divisional rivalry at Soldier Field Sunday. The Bears are coming off a pair of wins — and covers — with Justin Fields under center while the Packers are riding a four-game winning streak and have won all four of the meetings with Chicago over the last two seasons.

Matt LaFleur is 4-0 ATS against the Bears and his Packers enter this Week 6 matchup as 4.5-point NFL betting road favorites. The total sits at 45 thanks to Chicago’s Top-10 DVOA defense and league-worst yards-per-play offense.

Here are our free picks and predictions for Packers vs. Bears for Sunday, October 17.

The Packers were -4.5 on the look-ahead, opened at the same number on Sunday, and is still there at the time of writing. The total has dropped to 45 after opening at 46. Use the live odds widget above to track any future line movements right up until kickoff and be sure to check out the full NFL odds before placing your bets.

The Packers are 17-5 ATS in their last 22 meetings in Chicago. Find more NFL betting trends for Packers vs. Bears.

The Packers have ripped off four straight covers, including last week in a game that saw five missed field goals in the final 15 minutes (fourth quarter + overtime). Green Bay opened at -3.5 but bettors who got the closing number of -2 were the only ones to cover that line. The Packers could easily be 1-2 SU over their last three games and have been tied or trailed in the final two minutes of all three of their road games this season.

But this is Chicago... and Green Bay loves beating down its divisional rival.

Green Bay and coach Matt LaFleur have had plenty of success versus the Bears, as the head coach is 4-0 ATS against them. Last year, Chicago was a 4.5-point home dog in Week 17 and lost 31-16 — despite outgaining Green Bay on the ground and in the air. Now, the Bears are facing the same number and come into the match missing their No. 1 running back in David Montgomery, QB Justin Fields is banged up (knee) and is playing with training wheels, while defensive captain Akiem Hicks is questionable after missing last week.

The Green Bay defense is nothing special, sitting seventh in yards per pass against and 18th in yards per rush against. All-world CB Jaire Alexander could miss another game but with Bill Lazor leaning heavily on the run game with Fields Under center, and not using the QB’s legs as a weapon, this Chicago offense is not one to get behind. It ranks dead last in yards per play and 28th in plays per game — if Rodgers and the offense can score three times, they could actually still cover this game.

The injuries on the Green Bay O-line are still prevalent but Rodgers has shown he can still get it done with backups. Over the last two weeks, the Packers have missed three starting linemen each week and Rodgers has still thrown for nearly 600 yards on 75 passes and four TDs. Chicago has been a better run-defense team and allowed 300-plus yards and three TDs to Matthew Stafford in Week 1, while Jared Goff tossed 299 yards and two TDs versus this Chicago defense in Week 4. Rodgers dunked on the Bears last season and completed over 75 percent of his passes and threw for eight TDs compared to 0 INTs in two meetings.

Green Bay was -4.5 in Chicago last year and we think Week 6's home team looks worse now than it did in Week 17 of 2020. With Lazor and Matt Nagy not opening things up for the rookie QB, it’s tough to expect the Bears’ offense to be successful, especially if it needs to play catchup as the Bengals did in Week 5.

There's also this: Rodgers is 21-4 SU versus the Bears over his 17-year career.

Rodgers is low on receiving options and had to send 16 of his 39 passes to Davante Adams last week, and his 206 receiving yards accounted for 60 percent of the team’s air yards. Chicago CB Jaylon Johnson has improved in his sophomore season and ranks as the 11th-best CB, per Pro Football Focus. Stopping the Rogers-Adams connection is likely the Bears' top defensive game plan.

If Green Bay gets up early, look for them to lean on the run as they did in Week 4 versus the Steelers. A.J. Dillon is becoming more involved and LaFleur can keep his backfield fresh for some late-game clock eating.

Fields and the Chicago offense aren’t a big threat to run up the score, even against an average defense like Green Bay. Fields has gained just 25 rushing yards over his last three starts and hasn’t thrown the ball more than 20 times. He has just 29 completed passes over his three starts and has tossed only a single TD. RB David Montgomery is also out meaning Damien Williams and Khalil Herbert are next in line. Although we don’t value the RB position that high, Montgomery is an elite back and his big-play ability will be missed by the identity-less Chicago offense.

Combined, both teams are 3-7 O/U on the year. Chicago hasn’t seen more than 40 total points scored since Fields has taken over and we’d expect a solid effort from both defenses with first place in the division on the line. We’re struggling to see how a Chicago offense that has just five TDs in its last three games is going to top its team total of 20.5 points.

The first-quarter Under has hit in four of Chicago’s five games overall and each of Fields’ three starts. An average of 4.33 combined points has been scored in those three games as Chicago managed just six offensive plays last week in the first quarter and ran the ball four times.

In Week 4, the Bears ran the ball on 14 of their first 18 plays. This is not a quick-strike offense.

The Chicago defense has also held its own in the early frame having allowed just three points in the first 15 minutes since Week 2. Their red-zone defense sits third in the league and has given up a TD just six times in 16 red zone stands.

The Packers are 2-3 O/U on first-quarter totals this year but they have played some decent offenses and have given up three first quarters TDs this season. The Packers’ red zone defense has been awful, having given up a TD in all 13 trips inside the 20, but that rate isn’t sustainable and in facing a held-back Fields offense, that number should come down.

Green Bay also has no problem settling for field goals as it is tied for third in the league in FG attempts per game. 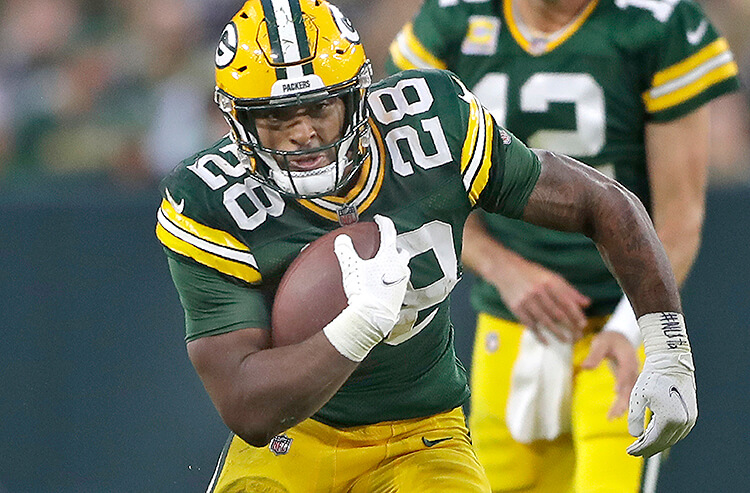