Both the Panthers and Vikings are coming off uninspiring performances in Week 5 and are looking to put forth a better effort this Sunday. Our NFL betting picks are leaning with Kirk Cousins and Minny to win — but is there value in Carolina starting strong?

The Carolina Panthers nor the Minnesota Vikings walked away from last Sunday looking good, but at least the Vikes scrounged up a win while the Panthers let a victory slip away due to a late-game collapse.

Those fortunes have the NFL betting odds installing Carolina as a slim 1.5-point favorite for this Week 6 matchup, trying to avoid a three-game slide after starting the new season 3-0. Minnesota, on the other hand, is desperate for any momentum after a 2-3 start to the year.

Here are our NFL free picks and predictions for Vikings vs. Panthers on Sunday, October 17.

Carolina opened as 1.5-point home chalk for this matchup and has stayed steady in the first 48 hours of action. The total hit the board at 47 points and has trickled down to as low as 46 points at some shops. Use the live odds widget above to track any future line movements right up until kickoff and be sure to check out the full NFL odds before placing your bets.

The Panthers are 4-10-1 ATS in their last 15 home games. Find more NFL betting trends for Vikings vs. Panthers.

Another week, another one-score game for the Vikings, who are taking years off of bettors’ lives with their tight finishes. Minnesota barfed up a 16-6 fourth-quarter lead and needed a last-second 54-yard field goal to get past Detroit 19-17 in Week 5, falling well short as a 10-point favorite at home.

The Week 5 win felt like anything but... however, if you scan the Vikes’ 2021 results so far, this team could easily be a perfect 5-0 and we’ve yet to see it play to its full potential. Minnesota has started to dig in on defense, giving up scores of 17, 14, and 17 the past three weeks, and faces a Carolina attack coming back to reality after a hot start.

The Panthers offense was able to work over some weaker foes early into the campaign but that playbook has left plenty to be desired in the last two weeks. Garbage time points against Dallas in Week 4 clouded the offense's stumbles, which were on full display in the loss to Philadelphia on Sunday.

Quarterback Sam Darnold is 47 for 76 (62%) in those last two outings, throwing for three touchdowns (two coming at the end of a blowout versus Dallas) and five interceptions. Darnold has also been sacked a total of eight times, three of those coming versus the Eagles, who pressured him on 43 percent of his dropbacks. Now, the Panthers pass protection faces a Minnesota defense that brings pressure on almost 32 percent of dropbacks (second-most) and has recorded 17 sacks on the year (also second).

Not having Christian McCaffrey to keep opposing pass rushes honest has been a big issue for Carolina, but even if the dynamic RB returns in Week 6, Darnold still needs to make throws — something he couldn’t do even when receivers were wide open in the second half of Sunday’s collapse.

This very well could be an ugly game — as has been the trend for Minnesota this season — but we’ll side with the better quarterback with the better weapons and take the points with the horned purple helmets.

The only defense bringing the heat more than Minnesota is Carolina, which ranks No. 1 in pressure percentage at 32.3.

The Panthers also blitz on more than 35 percent of opponents’ dropbacks and face a Vikings offensive line that has allowed Kirk Cousins to feel pressure on almost 31 percent of passing plays, equalling a league-high 34 hurries, 20 hits, and nine sacks.

The inability to give Cousins a clean pocket has dulled this could-be dangerous offense and forced Minnesota to go with a painfully conservative playbook the past two weeks, mustering only 6.3 yards per pass attempt in that span.

The Vikings have home run hitters in Justin Jefferson and Adam Thielen but attempt an average of only three passes of 20-plus yards per game — second-lowest in the league. Carolina has given up just 13 passing plays of 20 yards or more through five weeks and ranked 10th in air yards allowed.

With both teams trying to keep their QBs clean, and top running backs possibly on the return with Cook and McCaffrey on the mend, this will be a slow-paced, short gains effort that stays Under the number in Week 6.

While we’re grabbing the handful of the points with the Vikings for the full game, there’s value going with the home side in the opening 30 minutes.

Carolina is averaging just under two touchdowns per first half heading into Week 6 (60% of total scoring) and what’s more, the Vikings have been rotten on defense to close out the first two quarters.

Minnesota is giving up 14.4 first-half points per game with 10.4 of those occurring in the second quarter. In fact, the Vikes have allowed 8.8 of those second-quarter tallies in the final five minutes of the half, getting outscored 44-10 in those closing five-minute frames. 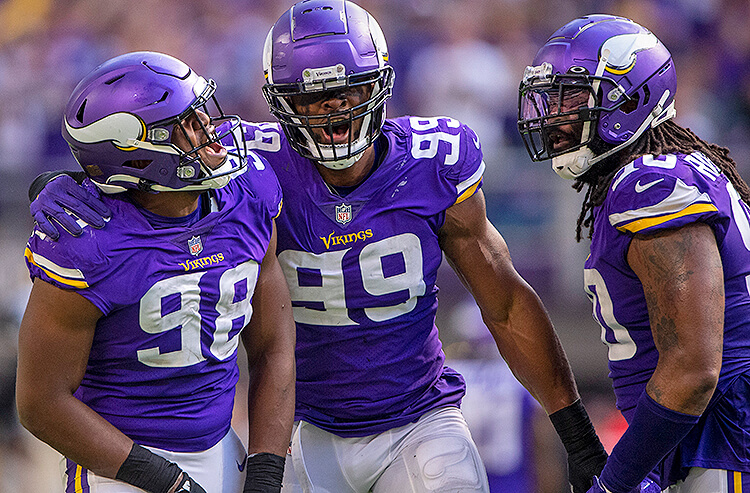