Rams vs Giants Week 6 Picks and Predictions: Fresh Rams Won't Have Any Problems on the Road

The Giants are overmatched by the Rams on both sides of the ball and are dealing with a long list of injuries, while L.A. comes in fresh off a mini bye week. Find out if NY can keep it close and cover with our NFL betting picks.

The Los Angeles Rams will return from a mini bye week, after defeating the Seahawks on TNF in Week 5, with a trip to the Meadowlands to take on the New York Giants.

As L.A. has ramped up its return to practice and geared toward Sunday's meeting, New York's been fighting the injury bug with issues across its roster. It will, however, have Daniel Jones under center after the QB was cleared at the end of the week.

Will Danny Dimes be enough for the G-Men to cover the NFL betting line in this one? Find out with our free Rams vs. Giants picks and predictions.

The line for this one got as large as Rams -11 during the week, with Jones' status up in the air. With news of his clearance, however, it dropped down to Rams -9 at DraftKings. The total sits between 48.5 and 49.5 depending on the book and remained in that area during the week. Use the live odds widget above to track any future line movements right up until kickoff and be sure to check out the full NFL odds before placing your bets.

The Over is 6-1 in the Rams' last seven games. Find more NFL betting trends for Rams vs. Giants.

You have to feel for the Giants in this spot. They had to prepare for an already difficult game with uncertainty at quarterback, plus deal with injuries to several important players on offense and defense. But it's a game made even more difficult because the Rams will be mighty fresh, having last played on Thursday Night Football last week.

L.A. is firing on all cylinders and look every part the Super Bowl contender it was expected to be at the outset of the season. Sean McVay's dialed-in and loving life with a quarterback with as much arm talent as Matthew Stafford, meshing moving pockets and play-action with more deep shots than he has ever called before. Add in the bread-and-butter of his offense, bunch sets and cross-field patterns, and you have a passing game that can kill you however it wants.

The Rams' defense hasn't yet hit its stride in the new year but remains league average in DVOA. Football Outsiders' DAVE metric suggests L.A.'s defense will hit above-average yet, and just five games under a new DC does offer reason for optimism. And, of course, the Rams have a pair of game-winners on that side of the ball in All-Universe defensive lineman Aaron Donald and secondary chesspiece Jalen Ramsey.

The Giants have a fine offense that has perhaps exceeded expectations under Jason Garrett, and that's a result of Daniel Jones certainly exceeding expectations. The Rams' defense disguises coverage looks brilliantly so Jones may yet turn into a turnover pumpkin, but it has been largely good returns. New York is, however, overmatched on both sides of the ball and come into this one considerably more banged-up than a fresh Rams team.

The Rams have proven to be capable of winning big and are coming off extended rest. Trust them to cover against New York.

Despite relatively middling play from Matthew Stafford in recent weeks, the Rams' offense has continued to cruise along. After five games, L.A. is third in offensive DVOA and second in passing DVOA, with Sean McVay having his offense operating like a layup line.

After picking apart a poorly coached Seahawks defense in primetime last week, he'll get to repeat that feat against a terribly disappointing Giants defense ranking 26th in DVOA. The Rams will need to do so, too, as they won't be the only successful offense in this one.

Last week aside, Jones has been one of the pleasant surprises of the 2021 season, taking care of the ball and creating with his arm and on the ground. Having Jones healthy for this one is absolutely crucial for the Over, obviously, while the other injuries on offense don't weigh in all that much.

In Sterling Shephard and Kadarius Toney, Jones will have his two best receivers available — with underwhelming free agent signing Kenny Golladay out. Saquon Barkley doesn't matter enough for his absence to factor in massively, especially with Devontae Booker more than capable of filling in as Jones' safety valve in the flat.

The Rams' defense is talented and above average but they've previously allowed Carson Wentz and Geno Smith to move the ball on them. It won't be any different against New York.

After breaking onto the scene with a nice six-catch, 78-yard game against the Saints in Week 4, Kadarius Toney went nuclear in Week 5 with 10 catches and 189 yards against the Cowboys. In a performance reminiscent of rookie season Odell Beckahm Jr., Toney was completely unguardable and played like a transcendent talent.

There isn't enough faith in Jason Garrett's Giants offense to take the Over on Toney's receiving yardage total, which is between 48.5 and 50.5 depending where you look. We will, however, happily take the OVer on his 4.5 receptions total after a two-week stretch that has seen Toney receive 22 targets and catch 16 balls.

Toney is the most talented player in New York's offense and his short-area quickness and elusiveness make him a big-play threat regardless of the depth of target. He will be fed often on Sunday. 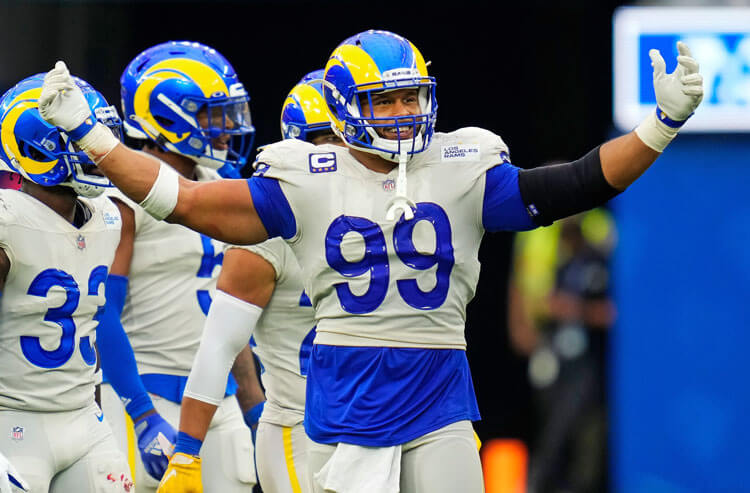 Rams vs Giants Week 6 Picks and Predictions: Fresh Rams Won't Have Any Problems on the Road
Provided by