Texans vs Colts Week 6 Picks and Predictions: Basement Battle in the AFC South

The AFC South's Texans and Colts are both 1-4 but appear headed in opposite directions, with Houston likely staying in the basement while Indianapolis continues to show fight. The Colts are better, but can they cover this spread? Check out our NFL picks.

It’s been a tough week for both the Houston Texans and Indianapolis Colts after both teams were involved in narrow Week 5 losses. The Texans lost to the Patriots and the Colts lost that tense Monday Night Football game against the Ravens.

Both teams sit on a 1-4 record, two wins behind the Titans in the AFC South and both teams probably need to win Sunday in order to maintain hopes of winning the division.

This Sunday you need to make sure you read our free NFL betting picks and predictions for the Texans vs. Colts.

We’ve only seen minor line movement so far, with the Colts moving from 9.5-point favorites to 10-point favorites and the points total slipping from 43.5 down to 43 points, the second-lowest total on the week. Use the live odds widget above to track any future line movements right up until kickoff and be sure to check out the full NFL odds before placing your bets.

The Texans are 4-1 ATS in their last five games against AFC opponents. Find more NFL betting trends for Texans vs. Colts.

Both of these teams sit on 1-4 records in the AFC South but that doesn’t really paint the full picture. The Colts have faced some of the best teams in the league, losing to the Seahawks, Rams, Titans, Ravens, and putting up a sole win against the Dolphins. Houston, meanwhile, beat the Jaguars in Week 1 before losing to the Browns, Panthers, Bills, and Patriots.

Now, they face each other, and I’m confident in the Colts being the superior of the two teams. The question is whether they can cover the 10-point spread, a particularly large spread when both teams have 1-4 records.

This Colts team was on the receiving end of an incredible comeback from Lamar Jackson and the Ravens on Monday Night Football, in a game that saw Carson Wentz thrive against Baltimore.

The loss of Quenton Nelson is also a huge one for the Colts, with no other guard being able to replicate what he brings this Indianapolis team. Despite that, Indy has still outscored the Texans this year by 19 points through five games.

Houston only lost by three points against the Pats a week ago and there were real positives to be taken, of which the performance of Davis Mills was the most impressive. The rookie Mills has looked more and more comfortable at this level. Against a smart Patriots defense, he managed to put up 312 yards and threw three touchdown passes. It was a marked improvement over the defeat to the Bills, where Mills threw four interceptions and his ability to bounce back was very impressive.

I’ve been steadfast in my belief that the Colts are the best 1-4 team in recent memory but despite that, I can’t back them to cover a spread this size, especially when the Texans have covered five of their previous six against AFC opponents. This divisional game will be close and Houston will keep within striking difference even if it's not quite good enough to win outright.

Let’s simply look at what these two quarterbacks gave us last week. As mentioned, Mills threw for 312 yards and two touchdowns while Carson Wentz threw for 402 yards and two touchdowns. These two quarterbacks are finding their feet with their new teams, and with both men coming up against middle-of-the-road defenses, I’m expecting this to be a far better offensive display than the bookies suggest.

Jonathan Taylor hasn’t really reached the heights that we saw from his last year, with the former Wisconsin man only rushing for over 100 yards once in five games this year. He’s not been awful but he’s not been the dominant force that we expected. He still has 4.5 yards per carry, something which bodes well ahead of this clash against the Texans.

The Texans haven’t been great at defending the run this year. Last week they allowed Damien Harris, a far inferior back to Taylor, to rush for 58 yards. The week before that they gave up 199 rushing yards to the Bills.

Now is the time for Jonathan Taylor to start getting hot, and he’ll get the opportunity to do so against the Texans on Sunday. 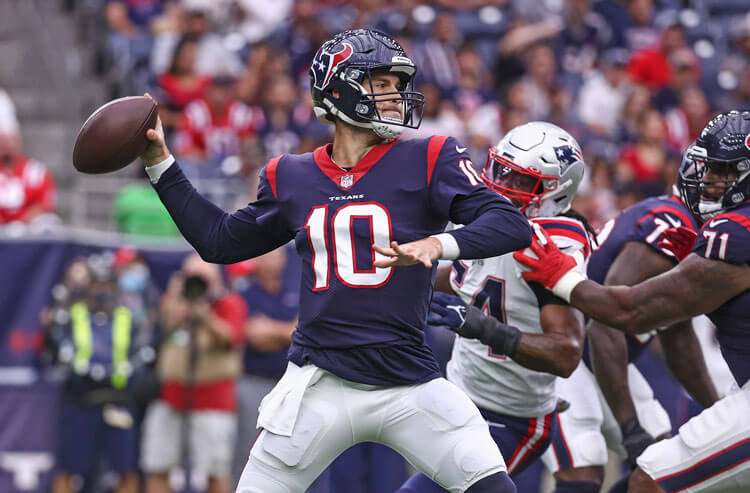 Texans vs Colts Week 6 Picks and Predictions: Basement Battle in the AFC South
Provided by