The Dolphins have been on a skid nearly all season long but are expected to get a boost in Week 6, as QB Tua Tagovailoa gets set to return. Find out if Tua and Miami will further the Jaguars' 2021 woes in our NFL betting picks.

Last week we saw the first of two NFL games hosted in London, England, this season. We’re back at Tottenham Hotspur Stadium again with the Miami Dolphins facing the ‘home’ Jacksonville Jaguars.

Urban Meyer, firmly on the hot seat amid controversy and a winless start, will be hoping that his Jags don’t lose and he gets left in London.

If you’re betting this game on Sunday, October 17th, then make sure you read our free NFL betting picks and predictions for the Dolphins vs. Jaguars first.

We’ve seen movement on the betting lines around the Dolphins vs. Jaguars following the news of Tua Tagovailoa returning from IR and potentially starting this Sunday. The total has jumped from 44.5 points up to 47 points and the Dolphins have moved from 3- to 3.5-point favorites.

The Over is 8-0 in the Jaguars’ past eight games on turf. Find more NFL betting trends for Dolphins vs. Jaguars.

Last week the NFL traveled to London, where the Falcons and Jets served up one of the most turgid games in recent memory. European fans will be hoping for much better this week and with the apparent return of Tua Tagovailoa, they just might get it.

Tagovailoa has returned from IR, practiced, and is now listed as probable to start on Sunday. Jacoby Brissett has been reasonable in his absence but Dolphins fans will now hope that with Tagovailoa’s injury behind him, we’ll now see him reach the potential that Miami believed he had when they drafted him fifth overall in 2020.

Miami has been poor this season. It won its season opener against the Mac Jones-led Patriots but has since been thrashed by the Bills and Buccaneers as well as losing to both the Raiders and Colts. It’s worth looking at those teams, though, before we too harshly judge the Dolphins. The Bills and Bucs are among the league’s Top 5 teams, if not higher. The Colts have consistently shown fight despite their 1-4 record and the Raiders, until this week’s controversy and a losing streak, started the season 3-0.

That’s not to let Brian Flores and the Dolphins off the hook, there are real problems with Miami. The offense has looked stagnant and that’s only made life more difficult for the defense, which has really struggled to play to the level that we saw last year.

We’ll know more about this team in a month, as they have three winnable games in four weeks as they meet the Jags, Falcons, and Texans, with only a tough match against the Bills in between.

Can they beat the Jaguars this week? In my view, yes. The return of Tagovailoa will be crucial and you’d expect him to be able to cause this Jacksonville defense serious issues. It wasn’t long ago that the team’s whole identity was based on the strength of the defense, but now the Jaguars are 31st in the league in defensive DVOA, ahead of only the Chiefs, and they’ve given up a minimum of 23 points in each game so far.

The Jaguars arrive in London at a difficult time for the franchise, with the Urban Meyer controversy continuing to be a talking point. A good performance here by Trevor Lawrence, something the British fans will be keen to see, would help alleviate the pressure on Meyer, but it won’t be that simple.

Jacksonville is missing DJ Chark as well as Travis Etienne, who has been on IR all season, but Lawrence has shown glimpses of his college best, even if it hasn’t been as often as the team would have liked. You’d expect Lawrence to put on more of a performance than fellow rookie Zach Wilson did in London last week, but the team around him isn’t quite as good.

The Dolphins have a better defense than the Jaguars, despite giving up four more points this season and ultimately it’s going to come down to that. I see this game being a shootout with the team who can best contain the other ultimately winning. The Dolphins should cover the spread here.

We’re going to see points on Sunday. The Jaguars are actually ranked 23rd in offensive DVOA and we’ve seen Trevor Lawrence throw for 1,146 yards, which isn’t bad for his rookie season on a struggling team. We’ll see him continue to put up strong numbers this week and his arm will be a key to us beating the total here, especially given Meyer’s commitment to not featuring James Robinson as a bell cow.

Only the Jets have scored fewer points than the Dolphins but between the changes at quarterback and the tough opponents that they’ve faced, there are some excuses. They’ll have an uptick on Sunday and against a defense as weak as the Jaguars, you’d expect them to be able to score at least three touchdowns.

This Sunday we’re going to see a shootout though, as a victory is essential for both of these teams who have only managed one win in a combined ten games.

The Over has landed in the Jaguars’ past eight games on turf, in addition to the Dolphins’ past six games on turf, so both teams’ records are trending to this game going Over on this surface.

We’ve only seen Trevor Lawrence throw for Over 234.5 passing yards twice this year, most recently last week, but I’m confident that he’ll be able to repeat that this week.

Lawrence started slow for the Jaguars, with the Week 2 defeat to the Broncos a real low point, but since then his passer rating has continued to improve and he’s generally started to cut out his interceptions, too.

Last week, Tom Brady went for 411 yards against this Dolphins defense and they’re easy to get at. Derek Carr, too, managed 386 yards against the Dolphins as the Raiders narrowly beat them in Week 3. 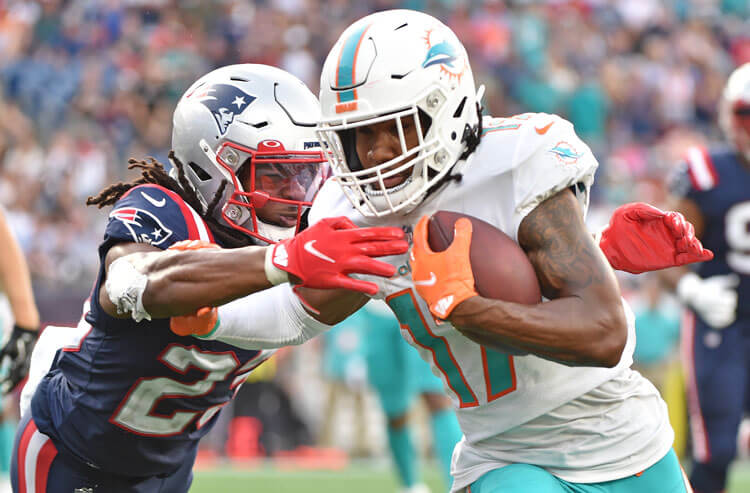