The Chargers will look to keep rolling in Baltimore on Sunday, as they carry a three-game win streak into an AFC matchup with the Ravens. Find out if L.A.'s offense can continue to be game-winners with our NFL betting picks.

The Baltimore Ravens don’t get much time to catch their breath after a thrilling win on Monday before welcoming the red-hot Los Angeles Chargers to M&T Stadium in Week 6.

Baltimore is a 3-point home favorite fresh off a come-from-behind overtime victory against Indianapolis – the team’s fourth game decided by a single score. The Chargers enter Sunday on a three-game winning streak, knocking off Kansas City, Las Vegas, and Cleveland in the process.

Here are our free NFL betting picks and predictions for Chargers at Ravens on October 17.

The Ravens were as big as -3.5 before their Monday matchup with the Colts. Following that nail-biter, the spread dipped to -3 (-105), which could indicate a move to -2.5 if money on the visiting Chargers continues to come in. The total opened at 50.5 points and has climbed to 52.

The Chargers are 35-15-4 ATS in their last 54 games as road underdogs. Find more NFL betting trends for Chargers vs. Ravens.

The fact that Los Angeles was able to muster almost 500 yards and score 47 points in only 23:32 of possession is incredible.

Cleveland was able to run all over the Bolts defense in Week 5 and dominated the football, which is something Baltimore used to be able to do before a rash of injuries plagued its running backs and now has started working its way through the offensive line.

The Ravens run game has produced a total of only 188 yards the past two games, with almost half of those gains from dual-threat QB Lamar Jackson, leaving this once-mighty rush attack to rank 16th in DVOA at Football Outsiders entering Week 6.

The run block unit is now down G Ben Cleveland and Ronnie Stanley, Tyre Phillips and Kevin Zeitler are all question marks on a short week, while Alejandro Villanueva battles through a knee injury.

Baltimore’s defense hasn’t been good enough to win games on its own (22nd in DVOA) and if the ground attack can’t chew up short yardage, dominate possession, and keep Justin Herbert and the L.A. offense off the field, this will be a long day for John Harbaugh’s team.

After a slow start to 2021 for this new Chargers offense under Joe Lombardi, Los Angeles is beginning to fire on all cylinders. Over the past three weeks, the Bolts boast an EPA per play of +0.226 and have scored 105 total points while cashing in on red zone trips at a nearly 86 percent clip for touchdowns.

I do expect a regression considering Los Angeles is hitting the road for the first time in three weeks, but that still leaves plenty of pop in this offense. And if Baltimore can’t slow things down, the Ravens will run dry in a shootout.

This total doesn’t paint a pretty picture for Baltimore, as its best plan of attack would be to stick this game in the sand and melt away the seconds with a plodding run game. But that’s not where this team is at right now.

Baltimore’s rushing attack is picking up only 3.9 yards per carry over its last three outings, which has trickled down to an average TOP of just 29:56 – a huge downtick for an offense that has ranked Top 3 in possession since handing the keys to Lamar Jackson.

That ball-hogging offense – or lack thereof – has exposed this defense. Baltimore is still generating a ton of pressure (28.8 percent) but relies on extra bodies to stir it up, calling blitz on more than 33 percent of opponents’ dropbacks.

Herbert has shown poise beyond his years and is not rattled by pressure or blitzes. He also benefits from a strong offensive line that owns an adjusted sack rate of 4.7 percent – seventh-lowest in the NFL. The loss of Oday Aboushi is a hit to the o-line but they do have the depth to patch that hole at right guard.

Baltimore’s offense can’t afford another slow start in Week 6. The Ravens are averaging less than a field goal in the opening quarter on the year and have yet to put up points on their opening drive of a game. Against the Colts, Baltimore was forced to punt on its first four possessions.

If the Bolts can take advantage of those slow starts and get up early, the Ravens have no choice but to abandon the run – besides Jackson making plays – and throw more than they would like. To their defense, the Baltimore receiving corps is getting healthier and Lamar was amazing in the second half of Monday’s win.

The Bolts' versatile running back had a big day in Week 5, rushing for 66 yards and two touchdowns while adding five catches on five targets for 53 yards through the air and another score.

Ekeler has continued to be a legit passing option, with 194 yards receiving and three TDs in 2021. He’ll come in handy with the Ravens throwing the kitchen sink at Herbert. Indianapolis RB Jonathan Taylor tore a strip off the Ravens in Week 5, with 76 of his total 116 yards receiving on one big run and catch.

Baltimore’s blitz-happy ways have opened it up to be exploited by pass-catching RBs, giving up 342 receiving yards to the position – second-most in the NFL. The Ravens also rank tied for worst in missed tackles (45) and have given up 858 yards after the catch (third-most). 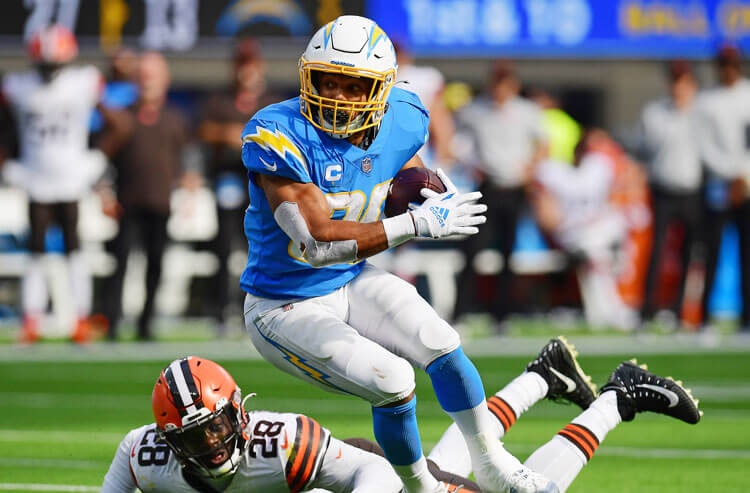