Titans vs Jaguars Week 5 Picks and Predictions: Can Jacksonville Put a Terrible Week Behind It?

The Jaguars have become a circus on and off the field, and now have to try and find a win against divisional rivals the Tennessee Titans. Can the home underdogs pull out a surprising upset? Check out our picks.

Grind. That’s been the word of the week in Jacksonville. A team motto for the Jaguars, and also something that we saw far, far too much of, in a viral video of Urban Meyer this week.

The Jaguars have been besieged, as their head coach has gone through another controversy with his private life becoming more of a story than their 0-4 start. The Titans, meanwhile, sit at 2-2 and stumbled to a humiliating loss when they gave the New York Jets their first win of the season.

So, which of these two teams will finish their weeks on a high, and who will continue to struggle? Find out in our free NFL betting picks and predictions for the Titans vs. Jaguars.

The total points line has risen from 48 to 48.5 points, meanwhile, the Titans have moved from 3.5-point to 4.5-point favorites. Use the live odds widget above to track any future line movements right up until kickoff and be sure to check out the full NFL odds before placing your bets.

The Over is 4-0 in the Titans’ last four road games. Find more NFL betting trends for Titans vs. Jaguars.

It’s been one hell of a week in Jacksonville. We don’t need to get into all the details but it’s clear that Urban Meyer thinks of himself as above a lot of things including his team, his responsibilities, and his marriage. It’s been a circus and one that’s probably distracted us from what really matters, just how poor his teams have been performing.

With everything that’s happened and a far from convincing statement from owner Shahid Khan, it already feels like the clock is ticking on his tenure. The real concern is that anything could impact the development of Trevor Lawrence, who has already lost more games than his time in high school and college combined. It’s been an ugly start for Lawrence but against the Bengals on last week’s Thursday Night Football, we saw some of the magic which got him drafted first overall.

We’ll likely see more moments of that Lawrence magic on Sunday, especially considering that Kyler Murray, Russell Wilson, and, last week, Zach Wilson, have all gone off against the Titans.

The Titans’ defense isn’t at the level that we thought it may be before the season and they’ve given up only four fewer points than the Jaguars through four games. We will see a higher scoring Jaguars than we’ve been used to, as it’s an offense that generally has been trending upward over recent weeks. The issue is going to be their ability to stop Ryan Tannehill.

Only two teams have worse defensive DVOA than the Jaguars, and that’s Detroit and Kansas City, but interestingly they’re rock bottom in pass defense DVOA and have the league’s 14th best run defense DVOA.

The Titans will likely see AJ Brown back and potentially even Julio Jones, who both missed that shock loss to the Jets, and their game plan is unlikely to rely so heavily on Derrick Henry, especially given that rush defense is one of the few positives to the Jaguars season so far.

The Titans will bounce back and win this divisional game to further strengthen their lead in the AFC South. They’ll leave Florida with the W and they’ll cover the spread.

We’re still not confident in both Brown and Jones playing against the Jaguars, but regardless of who manages to get on the field, we can be certain that Tannehill will find receivers who’ll carve this Jags secondary to pieces.

The total is a high one at 48.5, and the Titans will put up a large amount of those points, but the Jaguars and Trevor Lawrence are going to have a day on offense too. The Titans are only 26th in the league in defensive DVOA.

This game is primed to be a high-scoring encounter, so we’ll be taking the Over here and running straight to the bank.

There’s one prop that immediately leaps out when looking at those for the Titans vs. Jaguars game and it involves rushing yards. We won’t be looking at either of the team’s running backs, James Robinson or Derrick Henry.

We’ll be taking a look at Laviska Shenault Jr, the second round pick from Colorado in last year’s draft. At 6-foot-1 and 227 pounds, he is dynamic, smart, and is a Swiss army knife for the Jacksonville Jaguars. He’s gradually become more of a key part of this Jacksonville team and since DJ Chark went to IR, he’s become the team's primary pass-catcher, reeling in 6 receptions last Thursday night for 99 yards — double the receptions and four times the yardage of Marvin Jones.

We’re interested in Shenault the runner, though. In three of four games this season he’s had at least one rushing attempt. The Titans have given up 114.5 yards per game to running backs and you’d have to fancy Shenault’s chances of rushing for Over 1.5 yards if he’s used in the backfield again. 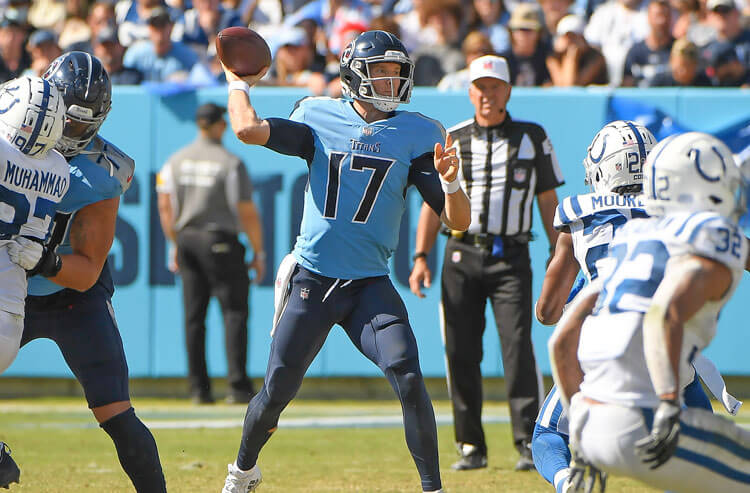 Titans vs Jaguars Week 5 Picks and Predictions: Can Jacksonville Put a Terrible Week Behind It?
Provided by