The highly=anticipated AFC Championship rematch has a massive Over/Under of 56.5 but NFL regular-season totals of 55-plus points have yielded a 28-40 O/U record since 2010. Find out who we think will cover and why we like the Under in our Bills vs. Cheifs 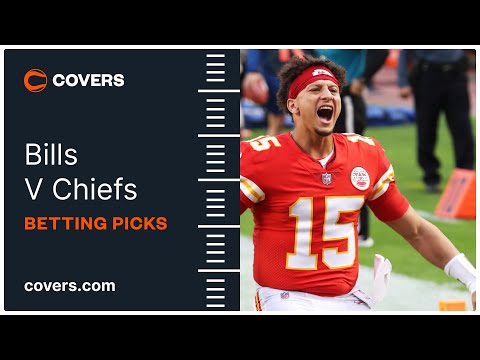 If the Buffalo Bills want to fully ascend and be the best team in the AFC, they have to slay their dragon. And Buffalo heads right into the dragon's lair in Week 5, visiting Arrowhead Stadium to face the Kansas City Chiefs in the spotlight of Sunday Night Football.

The Chiefs got the best of the Bills in both meetings last season, the most recent being a 38-24 triumph in the AFC Championship — a game Buffalo led 9-0 early before falling apart. NFL betting lines have the vengeful Bills listed as 2.5-point underdogs for this primetime showdown.

Here are our free NFL picks and predictions for Bills vs. Chiefs on Sunday, October 10.

The lookahead line for this game had Kansas City as big as 4-point home chalk, but the official Week 5 opener hit the board at Chiefs -3 and quickly sunk below the field goal to -2.5. However, as of this writing, FanDuel sportsbook was still hanging Bills +3 (-120). The total for this game is at 56.5 points, which is the largest Over/Under number of the 2021 season so far. These teams topped a 55-point total in the AFC title game in January. Use the live odds widget above to track any future line movements right up until kickoff and be sure to check out the full NFL odds before placing your bets.

We know both teams can score. Kansas City and Buffalo sit second and third, respectively, in points per game through four outings and last year’s AFC Championship gave Over bettors plenty of breathing room. Measuring these defenses, on the other hand, is a bit more cut and dry.

The Chiefs are bad. We know this for sure. The Kansas City stop unit sits dead last in Defensive DVOA at Football Outsiders and lugs an EPA per play of + 0.225 — well below the bottom of the league. Opponents are gaining nearly seven yards per snap and when KC does happen to lengthen those series to third down, it’s only getting stops less than 44 percent of the time.

The Chiefs' foes own an average time of possession of 29:57 (18th) — not because the defense is getting the job done but because they’re letting those offenses breeze down field for quick scores. This is where strategy has to align for Buffalo, which hasn’t faced much pushback since a sloppy Week 1 loss to Pittsburgh.

The Bills are the fourth-fastest playbook in the NFL right now, running a play every 25.65 seconds and yet owning an average TOP of 33:53 (4th). They could stand to be a little more methodical in this rematch with the Chiefs and have the running game this year to do so. Buffalo is picking up more than 145 yards on the ground per game on the thundering legs of Devin Singletary and Zack Moss with QB Josh Allen chipping in when needed.

Some will want to point to Buffalo’s strength of schedule out of the gate, with the Bills running roughshod over the likes of Miami, Washington, and Houston the past three weeks — three foes with a combined 4-8 SU record so far. But the Bills not only covered the spread (and some meaty ones at that) but they absolutely destroyed those opponents. We haven’t seen Kansas City win that convincingly since… blasting the Jets 35-9 in Week 8 of last season.

As mentioned, this 56.5-point total is the tallest Over/Under so far in 2021. All the weapons are there for a high-scoring finish but the makeup of these teams’ playbooks through four weeks is very different from 2020.

We mentioned the Bills’ effective ground game, but the Chiefs are having plenty of success running the football as well. Kansas City is coming off a 200-yard rushing day versus the Eagles in Week 4 and average 5.1 yards per carry (4th) heading into this primetime game. Part of that success comes from having a passing game as lethal as KC’s keeping defenses spread out in coverage, but credit should be given to the offensive line and running backs Darrel Williams and Clyde Edwards-Helaire.

The Chiefs are handing off on more than 41 percent of snaps in 2021, a significant increase in runs compared to 2020 and 2019. That will continue against the Bills on Sunday night, with Andy Reid keeping Buffalo’s pass rush honest.

The Bills have blitzed on just under 22 percent of dropbacks yet have been able to generate pressure at a 34.1 percent clip (the second-highest rate in the NFL). That metric is a bit inflated due to the level of competition as well as opponents having to play behind, making their playbooks one-dimensional. But KC must respect that ability to get in Mahomes’ face with only four rushers coming.

As for slowing the Bills attack down, the Chiefs may also opt to play a little defense on offense with the ground game, chewing up short gains and keeping Allen & Co. iced on the sideline. The Bills have had little issues moving the chains but have stubbed their toe in the red zone, scoring touchdowns on just 12 of their 21 total trips inside their rivals’ 20-yard line (57%).

With two teams playing keep-away from their respective offenses, the Sunday nighter will come up short of this lofty total.

The Bills have some notable injures on defense but while guys like Jordan Poyer and Taron Johnson are expected back in the secondary, top coverage LB Matt Milano is nursing another hamstring ailment. Not what you want with the best TE in the league lining up across from you.

Milano is questionable but even if he does play, he will struggle to keep pace with Travis Kelce. The Chiefs’ star tight end had a quiet day in Week 4, catching four of six targets for just 23 yards, but he amassed 213 total yards in the previous two outings along with a touchdown.

Kelce shredded Buffalo in the AFC title game, reeling in 13 of 15 passes for 118 yards (9.1 yards per catch) and two touchdowns. When these teams played in Orchard Park in mid-October 2020, he snagged another pair of scores and finished with 65 yards on five receptions.

Buffalo hasn’t had much trouble with tight ends this season, giving up just 142 total yards on 14 receptions, but Kelce is not your average TE and Milano’s injury impact has been felt before. We like the Over on his receiving yards and a sprinkle on the Kelce TD anytime prop may be worth a wager. 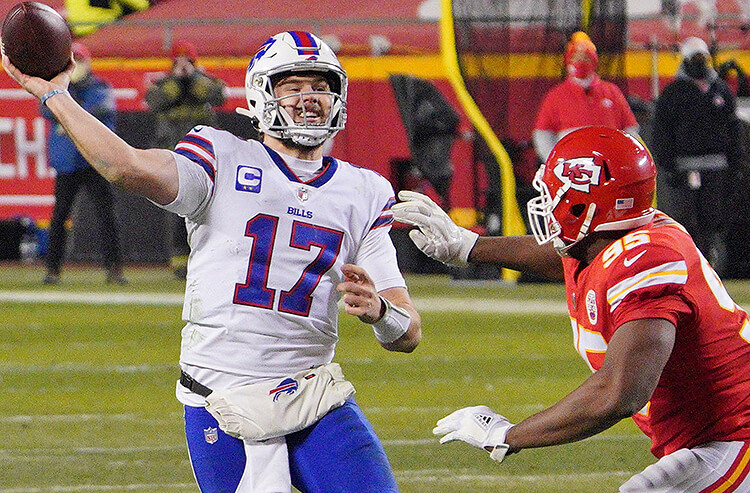