Giants vs Cowboys Week 5 Picks and Predictions: Saquon the Chef Gets Cooking

New York is just 1-3, but has had some bad luck on their side. Dallas is 3-1 and leads the division, but has benefitted from takeaways. Something will give when they clash in Week 5 — check out our Giants vs. Cowboys picks.

The Dallas Cowboys are the hottest team in the NFL, riding three straight wins and a star-studded attack into a Week 5 home stand versus the New York Giants, who just won their first game of 2021 in New Orleans last Sunday.

But while the records are flipped, the cliché of “throwing it all out the window” in divisional matchups rings true in this classic NFC East rivalry. Dallas is a 7-point home favorite but early money has sided with the G-Men in Week 5.

Check out our NFL free picks and predictions for Giants at Cowboys on October 10.

Dallas opened as big as 7.5-point home chalk for Week 5 and early play on the Giants slimmed that spread to a touchdown. Some books are dealing New York +7 (-115), which could indicate a move to 6.5 if action on the Giants continues. The total for this NFC East showdown opened as low as 49.5 points and has marched upwards to 52.

The Over is 19-7 in the Cowboys’ last 26 home games. Find more NFL betting trends for Giants vs. Cowboys.

The Giants could easily be 3-1 alongside the Cowboys in the NFC East standings. New York lost a nail-biter on Thursday Night Football to Washington in Week 2 and suffered a similar fate versus Atlanta in Week 3 before coming through in the crunch with an overtime win at New Orleans in Week 4.

The victory over the Saints was a coming-out party for this offense, which hung a grand total of 485 yards on one of the better defenses in the NFL. Saquon Barkley is back in top form and anchored that attack on the ground and through the air – 126 total yards and two TDs – while QB Daniel Jones cooked up chemistry with new targets John Ross, Kenny Galladay and rookie WR Kadarius Toney.

Jones has been a pleasant surprise for Giants backers this season, boasting a QBR of 59.8, which ranks 11th in the NFL ahead of passers like Lamar Jackson, Josh Allen and his counterpart in Week 5, Cowboys QB Dak Prescott.

Jones has just one interception on the season – a Hail Mary chuck at the end of the first half in New Orleans – and wasn’t sacked in the win over the Saints, marking just the fourth game he’s stayed clean since taking over the QB1 job in the Big Apple back in 2019.

Dallas’ defense has overperformed so far in 2021, but not due to pressuring the passer. Dan Quinn’s scheme is only blitzing on 21 percent of opponent dropbacks and creating pressure at a mere 22 percent clip, rounding up nine sacks and still missing top pass rusher DeMarcus Lawrence.

The Cowboys are giving up 6.4 yards per play to foes (third-worst in the NFL) and without those game-changing takeaways (leads the league with eight INTs) things could be much different for Dallas heading into Week 5. Takeaways are a very tough stat to depend on week in and week out.

What we do know for sure is that Dallas’ run defense is ranked No. 19 in Run Defense DVOA at Football Outsiders and this stop unit is among the biggest offenders in missed tackles, with 29 through four games (sixth-most). Not the stats you want with Barkley hitting his stride on the other side of the ball.

As good as the Cowboys have looked, divisional games are a different beast. We missed the half-point hook on the G-Men but will take them at a TD before this line dips to +6.5.

We talked about the Giants’ budding scoring attack, but have to give credit to a dynamic Dallas offense that keeps opponents guessing.

Prescott is on an MVP pace and spreads the love around on offense. While Amari Cooper and CeeDee Lamb remain the biggest threats in the passing game, we’ve seen guys like Cedric Wilson and TEs Dalton Schultz and Blake Jarwin emerged as reliable targets. The Cowboys could have another game-breaker back in action with WR Michael Gallup expected to come off the IR in time for Week 5.

On the ground, the combo of Ezekiel Elliott and Tony Pollard have Dallas back on top of the rushing ranks (165.8 yards per game) and face a New York stop unit allowing 4.5 yards per carry (24th), boasting an EPA per run play of -0.015 on defense (25th), and a pass stop win rate of 30 percent (20th). In short, the G-Men will have cleat marks up and down their backs on Sunday.

New York's defense isn't presenting much push back nor will it be a bother to Prescott in the pocket. It ranks near the bottom of the Defensive DVOA metrics and boasts a bulky +0.131 EPA per play (27th) in four outings against some ho-hum offenses. The Giants pass rush is getting pressure on only 19 percent of opponents' dropbacks and was toothless versus the Saints, without a sack or even a QB hit along with 15 missed tackles - amassing 25 whiffs on the season.

Even with the significant move from 49.5 to 52 points, this Over feels secure with a shootout on tap. These foes have topped the total in four of their last five matchups while topping the total in nine of their last dozen clashes inside Jerry’s World.

As mentioned, this Week 5 matchup will be a field day for the running backs. Part of New York’s early game plan will be milking a little clock on offense and trying to limit the amount of touches Prescott gets with the football.

With that in mind, we like Barkley to bust through his rushing yards total Sunday. He’s looked better with every game back since returning from a knee injury suffered in 2020, but has done more damage through the air than on the ground.

The Cowboys have some active linebackers who may be able to keep pace in coverage but will get left in the dust when Barkley bursts through holes on handoffs. Dallas is giving up 4.7 yards per carry to opposing rushers but hasn’t had to worry about the ground game much since they’ve been blowing out foes and forcing the pass.

The last time Saquon played in AT&T Stadium was way back in Week 1 of the 2019 season, rushing for 120 yards on 11 carries, including a 59-yard scamper. He may not get to those heights but will clear this rushing yards prop with plenty of head room. 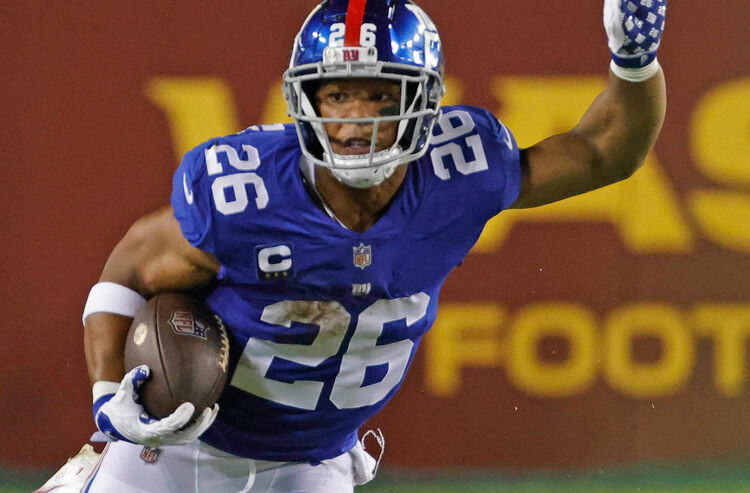 Giants vs Cowboys Week 5 Picks and Predictions: Saquon the Chef Gets Cooking
Provided by