49ers vs Cardinals Week 5 Picks and Predictions: No Slowing Kyler and Cards' Offense

Kyler Murray and the Cardinals have steamrolled to a perfect record but the 49ers are always a tough test within the division. Can Arizona capitalize on SF's QB uncertainty and stay perfect? Check out our picks.

The Arizona Cardinals will look to stay perfect in Week 5 as they host the San Francisco 49ers, who have dropped two straight after opening the season 2-0. The 4-0 Cards could be facing rookie QB Trey Lance, as Jimmy Garoppolo is dealing with a leg injury but has yet to be ruled out.

The Cardinals are 7-3 SU in the last 10 meetings, with each team splitting a pair of road games last season. Arizona is a 5-point home favorite with the total set at 50 on the NFL betting board.

Here are our free picks and predictions for 49ers vs. Cardinals for Sunday, October 10.

Arizona was -2.5 on the look-ahead but moved to -4 at opening. That number has steadily gone up and sits at -5 with a few -5.5s as the spread sits in the void between 3.5 and 5.5. The total has fallen to 50 after opening at 53.5. Use the live odds widget above to track any future line movements right up until kickoff and be sure to check out the full NFL odds before placing your bets.

The  49ers are 1-5-1 ATS in their last seven meetings against the Cardinals. Find more NFL betting trends for 49ers vs. Cardinals.

Even with the 4-0 SU record, Arizona has been padding the pockets of ATS backers as they are 3-1 ATS to open the season and coming off a non-sweat cover versus a legit L.A. defense in Week 4. Another tough division matchup is on deck this week, but facing a 49ers team that is still deciding who will start at QB is a big advantage for Kliff Kingsbury’s unbeaten team.

Rookie Trey Lance found himself under center to start the second half last week as starter Jimmy Garoppolo exited with a leg contusion. The injury was first thought to be a multi-week injury but coach Kyle Shanahan has yet to announce Lance as the Week 5 starter. In his two quarters of action, the San Francisco rookie signal-caller finished 9 for 18 for 157 and two scores but looked uncomfortable in the pocket and added 41 yards on the ground. This was versus the Seahawks and their 25th-ranked defense. A 76-yard TD on broken coverage had a lot to do with the yardage. Arizona will present a different challenge with one of the league’s best edge rushers in Chandler Jones and the No. 3 DVOA pass defense.

The 49ers are also very thin at RB and gaining just 3.9 yards per carry. The Arizona rush defense is its weak point but will have a neutral matchup against a team lacking backfield talent. If Arizona can contain WR Deebo Samuel, who has 42 percent of the team’s air yards over the last three weeks, it can really limit this offense.

San Francisco has seen Russell Wilson and Aaron Rodgers over the last two weeks and has given up a total of 58 points. It bent and allowed four TDs on four red zone attempts last week and gave up another three TDs on five RZ attempts to the Packers in Week 3. Arizona is averaging 4.5 RZ attempts per game, which is the third-most in the league. If it can score inside the 20 at the rate that the Seahawks and Packers did, Arizona could be looking at its fourth straight 31-plus point outing.

We don’t want to get caught up in all the public hype on the Cards and are trying to keep our recency bias in check, but likely facing a rookie QB who was supposed to watch for most of the year, playing at home and matching up well defensively against the offensive strengths of the 49ers, we’re laying the points.

This week's total of 50 is the lowest that the Cardinals have seen this year. They sit 2-2 O/U on the year but each game has hit at least 50 points. The Arizona offense is running 66.5 plays per game (8th) and is tied for second in yards per play at 6.6. Kyler Murray is the betting favorite to win the MVP at +500 and has totaled 12 TDs through four games. Everyone knows about this talented passing game, but Arizona is also a Top-10 rushing team (4.4 yards per rush) and trails only Cleveland in rushing TDs per game (1.8). This is the highest-scoring team in all of football.

Lance may not put up numbers like he did last week as the Cardinals have a week to prepare for him, but his ability to pick up yards on the ground will hopefully keep this San Francisco offense moving the sticks. If Lance does fall flat, this Arizona offense should be able to take advantage of some short fields and not settle for field goals against one of the worst RZ defenses in the league.

Tight end George Kittle has been absent at practice but it sounds like he will be good to go and is just resting a prior ailment. He played through the calf injury in Week 4 and still saw 11 targets. Kittle could be in for a big game if Arizona focuses its attention on Samuel, as the Cardinals have not had to play a dangerous pass-catching TE this year.

This total fell quickly after opening but there is no way we are passing on this Arizona offense on a total of 50. The defense has been beaten and the Rams left a lot of points on the board last week with a turnover on downs late in the game, two giveaways, and a missed field goal. If Lance falls on his face, so be it, Arizona could still bail out this Over with five TDs — they average 4.2.

The 49ers have given up some yardage to opposing backs in the passing game this year. Last week, Alex Collins totaled 34 receiving yards on two catches while D’Andre Swift went off for an 8/65/1 in Week 1. On the year, the SF defense is averaging 6.5 catches for 50 yards to RBs. Enter Arizona running back Chase Edmonds.

Edmonds is coming off a massive week where he totaled 139 yards on 16 touches, including catching four of his five targets. The Arizona running back has 22 targets on the year and is averaging 99 total yards per game. Murray loves distributing the ball and Edmonds has had a ton of looks in the passing game.

James Conner’s role has been evolving but Edmonds’ snap count has stayed steady at nearly 70 percent. He is averaging over 30 passing snaps per game since Week 2. We’re staying away from his reception total of 3.5 but love his total yards (rushing and receiving) at 69.5. He is a perfect 4-0 O/U on this prop to begin the year and we’re looking to push it to 5-0 O/U.

Edmonds missed practice on Wednesday as did fellow RB Conners. The Cards are just hopefully managing their RBs practice reps and we’re expecting them to be full participants later in the week. 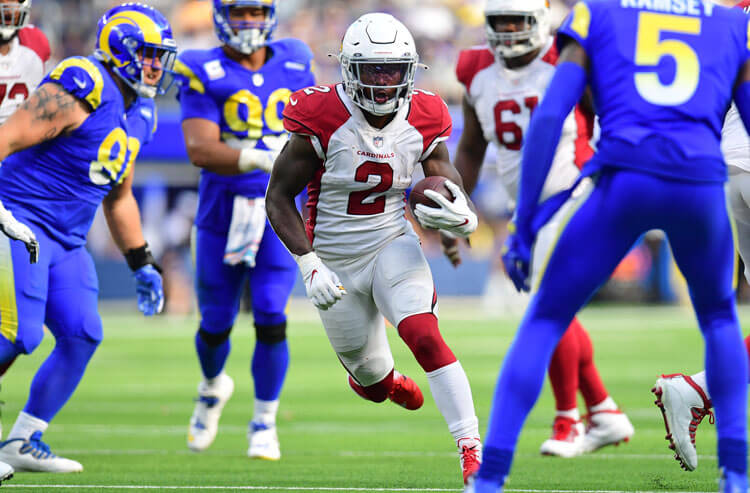 49ers vs Cardinals Week 5 Picks and Predictions: No Slowing Kyler and Cards' Offense
Provided by