With fireworks on the way at Arrowhead in a Bills vs. Chiefs showdown, our Week 5 SNF prop picks focus on pass catchers — but not only the usual suspects. Check out all of our prop picks and predictions for Sunday Night Football.

The Buffalo Bills and Kansas City Chiefs played each other twice last season, including an offensive battle in the AFC Championship. Sunday night will give us the third meeting between the two betting favorites to win the AFC in the last 12 months. With a game total sitting at 57, plenty of points are expected, meaning there are a plethora of player props to take advantage of.

We bring you our favorite free prop picks and predictions for Sunday night’s matchup between the Kansas City Chiefs and the Buffalo Bills.

Dawson Knox has become one of Josh Allen’s favorite targets this year, as the underrated TE finished second on the team in targets last week with eight, which he turned into five grabs. He’s amassed four or more catches in three of the four weeks, which is impressive as three of those games were blowouts.

Knox gets to see a Kansas City defense that gave up 11 catches for 116 yards and a score to the Eagles’ TEs last week, five catches to Mark Andrews in Week 2, and six catches for 106 yards to Cleveland’s TEs in Week 1. Safety Daniel Sorensen is ranked as the second-worst safety in football, per PFF, and should have the responsibility of covering Knox.

Knox was inactive versus the Chiefs in Week 6 last year but caught six of eight targets against KC in the AFC Championship game.

His reception total wasn’t available all week and just hit the market late Friday. This number is trending up quickly and getting it sooner rather than later is suggested.

Sticking with TEs, Kansas City’s Travis Kelce made bank last season in two games versus the Buffalo Bills’ defense. Kelce totaled 18 catches, 183 yards, and four touchdowns. Buffalo had no answer for the seam stretcher and it wouldn’t surprise us if Andy Reed stuck with a working formula Sunday night at home.

The Bills have played some terrible QBs to open the season and Logan Thomas was the only real TE threat they faced. Thomas still caught all four of his targets for 42 yards and a score in Week 3. Opposing TEs are catching 71 percent of their targets against Buffalo while Kelce has hauled in nearly 74 percent of his targets since last year.

The Buffalo rush defense is holding teams to 3.2 yards per carry, which is the fourth-best mark in football. Patrick Mahomes might have to get it done in the air and threw for 325 yards and three scores in last year's AFC Championship. Kelce should be involved early and often Sunday night.

His reception total is a little high, at 7.5 grabs, and his TD prop is on the wrong side of even money. However, his yardage total is sitting at 87.5 yards. He was coming off back-to-back 100 games heading into Week 4 and should be force-fed after a low-volume outing last week.

Never Heard of Her

Kansas City's Jody Fortson has just four targets all year but two of them have been in the red zone, which has resulted in TDs in back-to-back weeks. The 6-foot-6 TE is a massive target in the short field and has the trust of Mahomes in the RZ.

There aren’t a ton of stats we can throw at this one but getting this price is usually reserved for zero-target players. Fortson saw 22 percent of the snaps last week which was up from eight percent the week before. Nine of his 15 snaps were in the passing game and he had two targets. 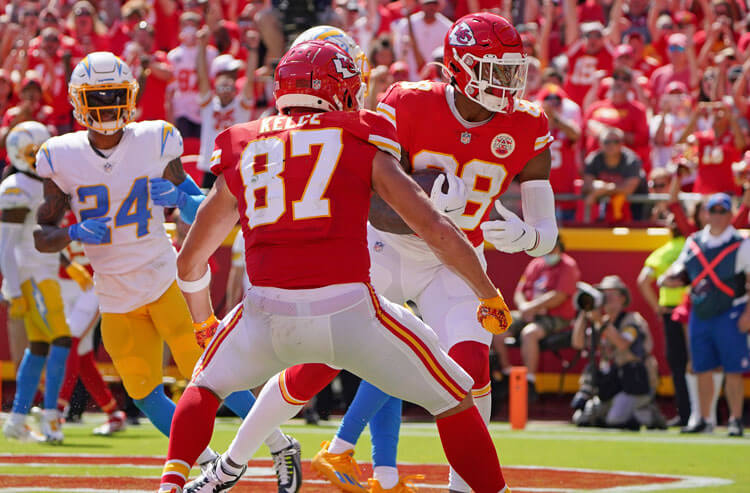