A pair of two-win teams will meet in the nation’s capital as the 2-7 Washington Football Team host the 2-6-1 Cincinnati Bengals in a non-conference showdown.

The Bengals are one of 2020’s best covering teams at 6-3 ATS, but got stomped by 26 points last week against Pittsburgh as 6.5-point dogs. Washington has closed just once as a favorite this year (NYG).

Sports Interaction had this game as a pick ‘em on the lookahead and now Washington sits as a -1.5-point favorite early in the week. The total opened at 46 and has ticked up to 46.5.

Here are our NFL free picks and predictions for Bengals vs Football Team on November 22 (1:00 p.m. ET).

Cloudy skies are expected for Sunday’s match at FedEx Field. Temperatures will be in the mid-50s with a zero percent chance of precipitation and a 7 mph wind. Be sure to monitor the gametime conditions with our NFL weather info.

The Bengals are 4-1 ATS in their last five games and 4-0 ATS against non-divisional opponents. Find more NFL betting trends for Bengals vs. Washington.

At 6-3 ATS on the year, Joe Burrow and the Cincinnati Bengals have been one of the best covering teams this year despite their 2-6-1 record. They ran into a tough, undefeated divisional opponent last week in Pittsburgh, but this is a team that has covered in each of their four non-divisional games this year.

Neither team has much familiarity in being the favorite this year, as each has closed as the favorite just once in 2020. However, the Bengals have played the better schedule over the last four games with Cincy playing PIT, TEN, CLE and IND (a combined 27-9 SU on the year) at 3-1 ATS over that stretch. Washington, on the other hand, is 2-2 ATS over its last four games against the likes of the NYG (twice), DET and DAL (a combined 9-19 SU on the year).

Cincinnati has played a much better schedule of late, has the advantage at QB, has a better turnover/takeaway rate, and is giving 1.5 points. RB Joe Mixon could even be available after missing the last three games (four weeks).

Cincinnati has not hit an Under (closing line) since October 11 as it is 3-0-1 O/U during that stretch. Washington may have the league’s No. 6 DVOA defense, but this is a Bengals team that has had to play three Top-5 DVOA defenses in their last five games. Besides, Washington’s defense has gotten to pad its stats against the Cowboys, Giants and Lions in its last four games.

Burrow and the offense are averaging 31.4 points per game against non-divisional foes and are No. 11 in the league in yards per play (5.6) over the last three weeks. They are more than capable of clearing their team total of 22.5 and are 6-2 O/U in their last eight games.

The Washington offense has been capable of moving the ball even with QB Alex Smith at the helm. Smith tossed for nearly 400 yards against the Lions’ No. 18 DVOA pass defense last week and will face the Bengals’ No. 24 DVOA pass defense per Football Outsiders.

Anytime the Bengals are playing there is a great chance of points being scored on both ends. Plus, the weather is looking great.

The Bengals had to abandon the run last week in Pittsburgh, as they trailed 12-0 after the first quarter and 22-7 after the first half. It’s unfortunate, as Cincy gained 6.6 yards per carry against the league’s No. 4 rush defense. We know Burrow can ball, but if Cincy can get their run game going with Gio Bernard or even Mixon (questionable), they can play against Washington’s defensive weakness, which is the run game.

Washington has a bottom-15 DVOA run defense and is giving up 126 yards on the ground to opponents this year which include two games against the RB-less Giants.

Even if Cincy struggles to find yards on the ground, Burrow is more than capable of putting up points as he has seven passing TDs (one rushing TD) over his last three games. Washington could also be without its starting safety in Deshazor Everett.

Did you know that if you parlayed this week’s NFL Bengals vs. Washington picks, you could win $60.25 on a $10 bet? 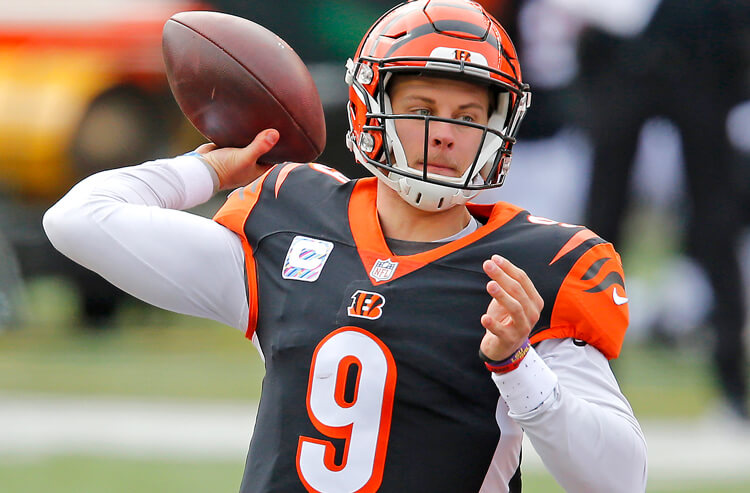 Bengals vs Washington Week 11 picks and predictions
Provided by