The Tennessee Titans and Baltimore Ravens are trying to keep pace in their respective divisions, with both teams coming off bad losses when they clash in Week 11. This is a rematch of last year’s AFC Divisional Round contest, which Tennessee won 28-12.

The Ravens are 6.5-point NFL betting favorites at home, trying to shake off an upset at the hands of New England Sunday night. The Titans enter this game off a mini bye, having lost 34-17 to Indianapolis last Thursday.

Check out our NFL free picks and predictions for Titans vs. Ravens on November 22.

The forecast is calling for cloudy skies (but no rain) and temperatures in the low-50s, with winds blowing up to 8 mph. Be sure to monitor the gametime conditions with our NFL weather info.

Baltimore is 3-10-1 ATS in its last 14 games as a favorite. Find more NFL betting trends for Titans vs. Ravens.

The once-mighty Ravens offense has paled in comparison to last season’s production and has seen those numbers slide even more over the past three games.

Baltimore is averaging only 21.7 points on 5.2 yards per play during that span. And while those metrics came against much stiffer defenses than the Titans, the Ravens’ season-long stats are unimpressive—most notably the downtick in passing production for QB Lamar Jackson.

Tennessee had everything go wrong in Week 10 – offense, defense and special teams – but held a 17-13 lead at the half before the wheels came off in the final 30 minutes. The Titans should get back to basics, which is feeding RB Derrick Henry the rock and letting him wear down a banged-up Baltimore defense.

Henry carried the ball only 19 times for 103 yards against the Colts, due to the offense having to play from behind in the final two quarters, and is averaging just over 19 runs the past three contests. Tennessee has won all but one of the games in which Henry has rushed 20 or more times and this Ravens stop unit allows 4.5 yards per carry to opposing RBs this season.

The spread opened as high as Baltimore -7 but Sunday night’s results have slimmed this under the key number of a touchdown. Get the Titans at +6.5 while you still can.

Two run-heavy playbooks usually means shorter gains and a continuous clock, which doesn’t leave much time for scoring. This total reflects that, opening at 47 points.

The Titans are one of the fastest-paced offenses in the NFL, running plays every 25.26 seconds (third in the NFL). That relentless tempo, Henry’s bruising runs and the fact that the Ravens’ defense is a MASH unit could bleed plenty of points from Baltimore this weekend.

The Ravens were down Calais Campbell, L.J. Fort and Jimmy Smith in Week 10, as well as a bevy of cornerbacks, then lost NT Brandon Williams Sunday night. Baltimore allowed 173 yards rushing on 39 carries to the Patriots, as well as 63 yards receiving and two passing TDs to New England’s backfield. Henry can be just as effective in the short passing game, reeling in 11 balls for 87 yards in 2020.

The Titans defense is nothing to write home about either. It’s been terrible in the red zone all year – allowing touchdowns on over 74 percent of its opponents’ trips inside the 20-yard line – and ranks among the worst in the NFL in third-down defense.

Good things come from Henry getting the football.

Not only does he blast defenses for 4.7 yards per carry, with his physical style working as an investment in attrition come the fourth quarter, but it also keeps the pass rush off Ryan Tannehill’s ass and allows this offense to thrive in play action.

Tennessee was being cautious of how much it leaned on Henry, not wanting to burn him out before the home stretch. But with the Titans’ playoff hopes starting to slip, head coach Mike Vrabel told the media they’ll look to get the ball in Henry’s hands as much as they can going forward.

Henry crushed the Ravens for 195 yards on 30 carries in the AFC Divisional Round last January and has topped the century mark on the ground in 12 of his last 19 games going back to the 2019 season. 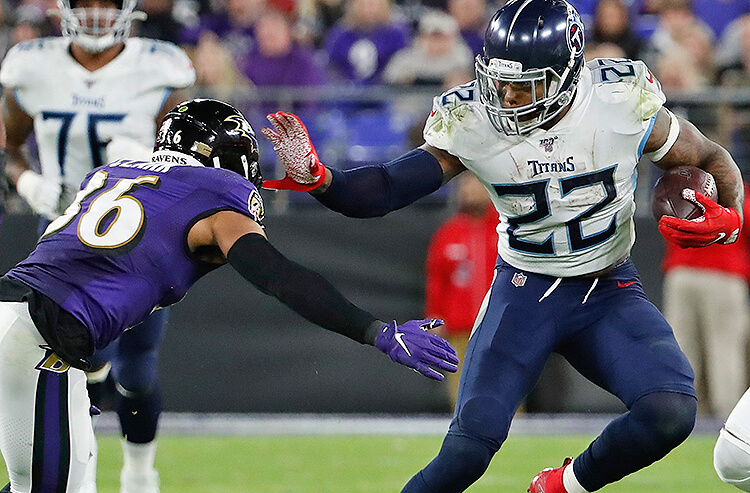 Titans vs Ravens Week 11 picks and predictions
Provided by