The Philadelphia Eagles will try to keep their spot on top of crap mountain (a.k.a. the NFC East) as they take their 3-5-1 division-leading record to Cleveland to take on the 6-3 Browns, who had to close their practice facilities on Monday again due to COVID.

The lookahead had the Browns as two-point NFL betting favorites but that number has hit north of three to -3.5 on the heels of the Eagles’ performance Sunday versus the Giants. NFL odds have seen the total surpass the key number of 47 and sits at 48 after opening at 45.

FirstEnergy Stadium will be cold and wet this week. Winds blowing NE up to 15 mph and overcast conditions (100 percent chance of rain) are forecasted, along with temperatures in the low-40s. Be sure to monitor the gametime conditions with our NFL weather info.

Before the wind storms of Week 8, the Browns were 5-1 O/U in Weeks 1 through 7. Find more NFL betting trends for Eagles vs. Browns.

Cleveland will be playing its third straight game at home and have become accustomed to the wind and rain at FirstEnergy Stadium. In Weeks 8 and 10, the Browns played in two of the lowest-scoring games of the year, thanks to high winds. This week, there will be 15-20 mph breezes in the area, which one would think favors the Browns.

Cleveland has also had to deal with COVID-19 hitting its players again this week, which shut down its practice facility. The same thing happened to the Browns last week and their facility was opened later in the week. If any team can make this a non-issue, it's Cleveland.

The Browns have no problem leaning on the running game again now that RBs Kareem Hunt and Nick Chubb are back to full health, as well as Pro Football Focus’ No. 1 guard in Wyatt Teller. In the first game that Chubb and Teller returned from injury, the Browns ran for 231 yards (5.6 YPC) and outgained their opponent by 1.2 yards per play. If passing is difficult, a double dose of Hunt and Chubb is unfair to Philadelphia’s rush defense, which gave up 318 yards on the ground to the run-heavy Steelers and Ravens in Weeks 5 and 6.

The Eagles got to toy around with some lower-tier teams over the last few weeks, but now have a four-game stretch that includes Cleveland, Seattle, Green Bay and New Orleans. If Week 10 was any indication of how this team is going to perform when it's relatively healthy, then the playoffs could be fleeting.

Philadelphia has played some weak competition over the last three games in the Giants (twice) and Dallas. It went 1-2 ATS and trailed in each of those games as big favorites.

After playing in 30-40 mph winds in Week 10, this week’s sub-20 mph should be nothing to Baker Mayfield and the passing offense. Before the two weather games in Weeks 8 and 10, the Browns had been smashing Overs, going 5-1 O/U in Weeks 2 through 7. The offense averaged 29 points per game, 34 points at home and 38 points against non-divisional teams.

If Cleveland's run game is back to it’s No. 1 form, then this offense will have no problem moving the sticks against an Eagles defense that is giving up 29 points per game to teams not named the Giants and the Cowboys.

The Eagles are finally getting healthy on offense with the recent returns of WR Alshon Jeffery, TE Dallas Goedert and RB Miles Sanders. This is the deepest the team has been all year at their skilled positions and it can run the ball successfully, as last week’s 156 yards proved.

In the games that both Hunt and Chubb have suited up for the Browns, Cleveland is averaging 27 points and that includes last week’s 10-point windstorm game. This is a run-first offense that could wear down a Philly defense that has dealt with injuries all year.

Over the Browns’ first six games, they were a first-half team, averaging over 16 points in the first 30 minutes and if the running game keeps grinding, second-half points could be easier to come by as well.

The Cleveland defense may also play a role in aiding the offense as Philly QB Carson Wentz is the most-sacked quarterback in the league. He also leads the league in interceptions (12) and fumbles (9).

The Browns have topped 26.5 points five times this year. The four times they failed to reach 27 points were the two wind games in Weeks 8 and 10 and two games against Baltimore and Pittsburgh—two of the best defenses in the league. 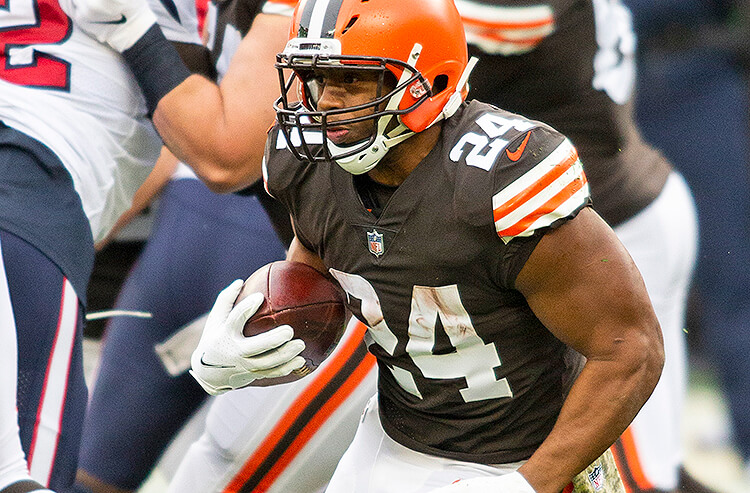 Eagles vs Browns Week 11 picks and predictions
Provided by