The New England Patriots try to parlay a big primetime win over Baltimore into a postseason push when they visit the Houston Texans in Week 11.

New England opened as big as +2.5 but following its impressive victory over the Ravens Sunday night, NFL betting action on the Pats has pushed this spread over the fence to New England -1. That sentiment isn’t too hard to understand when the only team the Texans have been able to beat this year is Jacksonville.

Here are our NFL free picks and predictions for Patriots vs. Texans on November 22.

The game will be played indoor at NRG Stadium. Be sure to monitor the gametime conditions of other Week 11 games with our NFL weather info.

The Over is 15-10 in the Texans’ last 25 games as home underdogs. Find more NFL betting trends for Patriots vs. Texans.

The Texans are 2-7 SU on the season but a close look at the schedule takes much of the shame out of that record, with losses to elite opponents like Kansas City, Pittsburgh and Green Bay as well as playoff contenders in Baltimore, Cleveland and Tennessee.

Before Week 10’s win over the Ravens, the Patriots’ marquee victory was against Las Vegas back in Week 3.

This is a tough situational spot for New England. Not only does the Sunday Night Football win (which came against an injury-plagued Baltimore defense) set the Patriots up for a letdown on the road, but this trip to Houston is the team’s third road game in the past four weeks.

The Texans are back home after two straight road outings, including a messy game in Cleveland this past Sunday in which both offenses were hampered by wind and rain. Houston can still put up points and sits Top 10 in passing offense DVOA, averaging almost 267 yards through the air on the season.

Deshaun Watson thrives on the fast inside turf at NRG Stadium (105.4 QBR at home vs. 98.9 QBR on the road) and has played well against Bill Belichick’s defense for his career. In three games against the Pats, Watson is 1-2 SU and 2-1 ATS with all three decided by a touchdown or less.

This game could turn into a shootout, which may be what Houston wants. The Texans’ run defense is bottom of the barrel, giving up 5.2 yards per carry to opposing rushers this season. New England stomped its way to 173 yards rushing on 39 attempts versus the Ravens and should be able to move the chains against Houston.

However, as poor as the Texans’ rush defense is, the Patriots’ passing defense is nearly as bad. New England sits near the bottom of the league in passing defense DVOA and has allowed 8.2 yards per attempt on the season—second highest in the NFL.

In the face of everything going on around him, Watson is still playing stellar football under center. Outside of Week 10’s weather-limited results (in which he still compiled 199 total yards), he’s posted a passer rating of 109 or higher in six straight games between Week 3 and Week 9. Watson is boasting these numbers despite being sacked 26 times already this season but won’t face much danger from the Pats stop unit, which has only 13 total sacks through nine games.

The Texans have struggled to start strong this season, averaging only 2.7 points per first quarter on the year. Luckily, the only team worse than Houston in those opening frames is New England: The Patriots have scored just 15 total points in the first 15 minutes all season.

The Texans have upped their first-quarter production in recent outings, averaging 3.3 in the initial frame over the past three contests, including 10 first-quarter tallies against the Jaguars in Week 9. The Patriots defense is giving up 4.3 points in the opening quarter but that climbs to 5.8 on the road.

With the run game limited without RB David Johnson (out) and Houston wanting to force New England to throw (and get away from the run), expect the Texans to come out swinging and try to build a big lead early on. 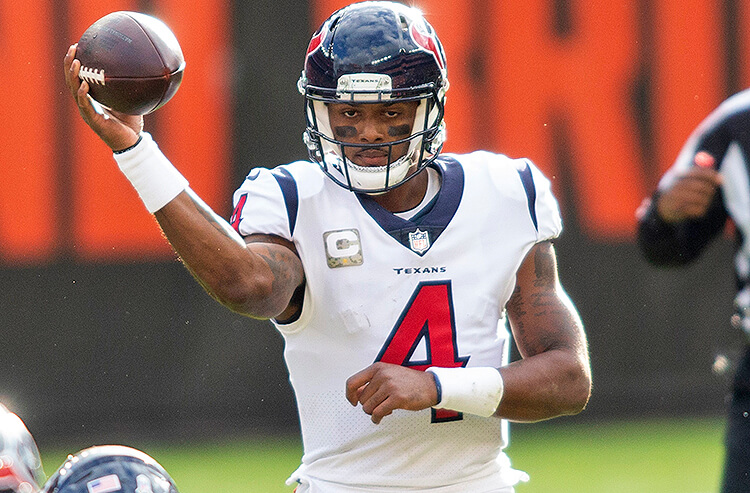 Patriots vs Texans Week 11 picks and predictions
Provided by