The Bills and Steelers seem to be headed in opposite directions in the AFC, after years of Pittsburgh dominance and Buffalo mediocrity. With an elite defense and a fresh scheme on offense, however, it's tough to see the Steelers simply rolling over.

The Buffalo Bills want to take another step up the AFC food chain in 2021 and that starts with a Week 1 home showdown against one of the long-time gatekeepers of the conference, the Pittsburgh Steelers.

NFL betting odds have Buffalo giving 6.5 points to Pittsburgh at Orchard Park, where they knocked off the Steelers 26-15 as a 2-point favorite last December. While many believe Pittsburgh’s era of excellence has run out, this spread sitting under the touchdown shows the Steelers plenty of respect.

Check out our free NFL picks and predictions for Steelers at Bills on September 12.

This spread opened as low as Bills -6 in the spring and briefly climbed to -7 before instant buyback on the underdog settled it to -6.5. Some shops are dealing Steelers +6.5 (-115), which could indicate a tick down to +6. The total for this Week 1 game hit the board at 50.5 and has slowly dwindled to 48.5 points in the final days before kickoff. Be sure to check out the full NFL odds before placing your bets, and also view the full line movement for this game.

The Steelers are 23-8-2 ATS in their last 33 games as underdogs, including a 10-3 ATS count in their last 13 outings as road pups. Find more NFL betting trends for Steelers vs. Bills.

The Bills have high hopes for 2021, especially on offense entering Year 4 for quarterback Josh Allen. Buffalo, which ranked fourth in EPA per play last season, has the bulk of those offensive weapons back and is expected to sit among the top-scoring attacks in the NFL.

The Steelers, however, are no slouches on defense. Pittsburgh finished the 2020 campaign atop the defensive DVOA metric at Football Outsiders, boasting a stingy and advantageous stop unit that collected a league-high 56 sacks and created 27 takeaways – second-most in the land.

That talented unit did a solid job checking Allen and the Bills last December, holding Buffalo to only nine points in the first half and giving up only two offensive touchdowns in the loss. Allen finished the day 24 for 43 for only 5.5 yards per attempt – a dip from his season average of 7.9 - along with two TDs and an interception, boasting a QBR of just 71.7.

The biggest quarterback questions for this matchup are on the Steelers' side, where veteran Ben Roethlisberger is giving it another go. Roethlisberger had a strong start to 2020 but fell off the face of the earth down the home stretch of the schedule. This year, he has a promoted offensive coordinator shaking things up and hopefully keeping Big Ben clean behind a soft offensive line.

Matt Canada is looking to up the tempo and shorten the throws, knowing the offensive line can’t hold on long enough for big plays to develop. Thankfully, the Steelers have some serious YAC machines in this offense, with Chase Claypool, JuJu Smith-Schuster, and versatile rookie RB Najee Harris able to reel in screens and break off big gains on the ground. Roethlisberger looked good in preseason runs and there’s plenty of pop left in his arm – at least for the season opener.

The Bills are destined for greatness, but Pittsburgh isn’t going to roll over in Week 1 and we’re happy taking the points in this opener, especially getting the half-point at +6.5. Pittsburgh has been a regular season underdog of six or more points only 11 times during Mike Tomlin’s tenure in the Steel City (since 2007), going 8-3 ATS in those games.

As mentioned, this is a new offensive system for the Steelers, one that will run shorter than past Pittsburgh attacks. That also means growing pain, most notably on the offensive line where the Steelers have three new starters filling gaps for departed veterans. Roethlisberger will likely burn a few throws in order to save his hide on Sunday.

Pittsburgh knows the less time Allen and the Bills have with the football, the better. Turnovers and third-down conversions plagued their possessions in last season’s meeting, allowing Buffalo 35:15 of TOP, so quick hits and hand-offs will keep the clock ticking and make for shorter third down tries.

The Bills may also be pressed when it comes to developing deep shots, since the Steelers bring the heat with a pass rush that boasted a pressure percentage of 35.1 – No. 1 in the NFL by a mile in 2020. Pass rush specialist T.J. Watt is in the middle of a contract dispute but is expected to be available in the opener – an opportunity for him to grab the bag on the big stage.

Buffalo only handed off on 38 percent of offensive snaps last year, which panned out to about 24 handoffs per game, but ran the ball 27 times for 104 yards versus the Steelers in Week 14, trying to give Allen some breathing room and keep Pittsburgh’s pass rush honest. Buffalo has a potential three-headed monster in the backfield with Devin Singletary, Zack Moss, and Matt Breida all capable of quality carries.

These AFC rivals have pumped out low-scoring results in recent meetings, including playing below the 48.5-point total last season. The Steelers and Bills have actually played Under in five of their last six encounters, going back to 2007.

Rookie running back Najee Harris is a perfect complement to this Steelers offense, most notably his ability to catch and run in the short passing game.

The former Alabama standout recorded 43 catches for 425 receiving yards in his final NCAA season and displayed that versatility in Week 2 of the preseason by snagging two of three passes for a total of 53 yards (one going for a 46-yard gain).

With the Steelers' offensive line projected to finish near the bottom of the league in protection metrics and the Bills improving their pass rush and push up front, Roethlisberger will be looking for release valves when the pressure gets too much. Harris is one of those options. 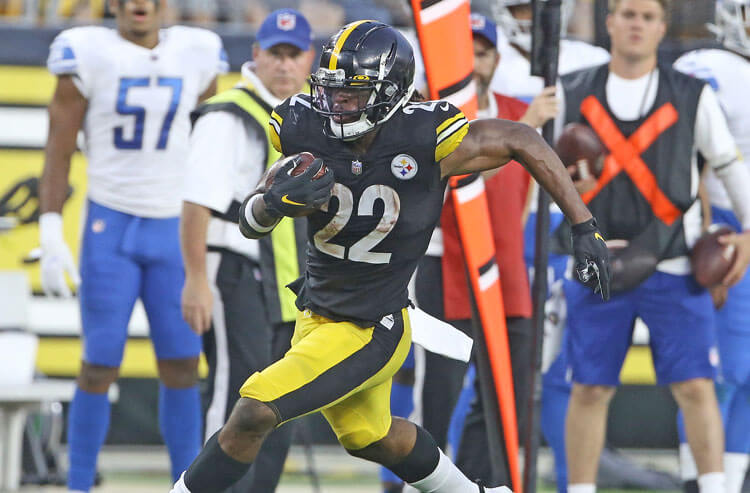