Washington Football Team will hope veteran Ryan Fitzpatrick can provide some stability while their vaunted D takes another step. Find out whether Fitz and the slight underdogs can do enough against a fresh Chargers team with our picks and predictions.

A non-conference clash kicks off the season for the Los Angeles Chargers when they cross the country to play the Washington Football Team in Week 1 of the 2021 season. NFL betting odds have L.A. as a slim 1-point favorite in DC.

The Chargers underwent a full overhaul on the sidelines, with a new head coach in Brandon Staley working alongside veteran coordinators Renaldo Hill and Joe Lombardi, the latter of which has reigning Rookie of the Year Justin Herbert headlining his offense.

Here are our free NFL picks and predictions for Chargers at Washington on September 12.

Some books opened this game at a pick’em back in May when Week 1 odds were released, some opened Washington as a 1-point home favorite while others set the Chargers as road chalk. However, a market correction has aligned operators, with L.A. getting as high as -1.5 over the summer before settling in as a 1-point fave.

The total for this Week 1 outing opened as high as 45 points and quickly adjusted to 44.5, where it has stayed for the majority of the offseason. Be sure to check out the full NFL odds before placing your bets, and also view the full line movement for this game.

Home underdogs between PK and +1.5 are 13-7 SU and ATS in Week 1 since 2000. Find more NFL betting trends for Chargers vs. Washington.

The Chargers are hoping the firing of Anthony Lynn and new faces in the coaches’ room can kill the culture of collapsing that has followed this franchise from San Diego to Los Angeles. But given the overhaul in schemes, there’s bound to be some growing pains – especially since L.A. opted to sit Herbert in the preseason and not allow the first-team offense to truly kick the tires on this new playbook.

Washington isn’t the type of defense you want to face in a first go-around, either. The Football Team finished third in defensive DVOA at Football Outsiders in 2020, riding that stop unit all the way to a division crown and postseason appearance.

Washington is very disruptive up front, headlined by DEs Chase Young and Montez Sweat, who combined for 16.5 sacks last year on a defense that totaled 47 sacks despite blitzing on only 32.4 percent of snaps. That ability to get pressure with the front four is vital to clogging up the middle of the field and slowing Herbert’s attack.

What’s more, that vaunted WFT pass rush takes on a retooled offensive line for the Bolts, who could be missing veteran stalwart Bryan Bulaga at RT in Week 1. Bulaga was limited in work this week and isn’t the only member of this o-line nursing injuries during camp, with Corey Linsley and Rashawn Slater also missing time over the past month.

Washington counters on offense with veteran gunslinger Ryan Fitzpatrick offering some “stability” at quarterback following a revolving door at the position in 2020. Fitzpatrick is a high-risk, high-reward option at QB, but does have some solid weapons around him in WR Terry McLaurin and TE Logan Thomas, as well as a versatile RB corps that can catch and run.

Running backs J.D. McKissic and Antonio Gibson make up one of the more underrated backfield attacks in the NFL and will get plenty of touches against an L.A. defense that has struggled to snuff the run. The Chargers ranked 26th in run defense DVOA in 2020 and with the stop unit having to respect Fitzpatrick’s arm more than past WFT QBs, there will be extra room for the run to operate.

This spread is sitting WFT +1 (-115), which could indicate a move to pick’em before kickoff. The Chargers are notorious for close games, so getting as much of a buffer as you can with the home side is important.

With Washington’s stingy stop unit making life tough on the Bolts and the Football Team leaning on the clock-eating ground game, that doesn’t leave much room for scoring on Sunday. This total is sitting at 44.5 – tied as the third-lowest Over/Under number on the Week 1 board.

The Chargers defense flips the script from a 4-3 to a 3-4 under new coordinator Hill, hoping to stir up some chaos after registering only 27 sacks in 2020. Los Angeles was sound against the pass last year but still allowed almost 27 points against per contest. That won’t fly under Staley, who was the architect for the Rams’ strong stop unit.

Another factor to consider is the early kickoff for this Week 1 outing, coming at 1 p.m. ET – 10 a.m. PT back in La-La Land. If the Bolts come out flat at all, Washington will quickly put them on their heels with a physical brand of football on both sides of the ball.

With the Football Team still getting used to Fitz “Magic” and Herbert finding his footing in Lombardi’s offense, the first 15 minutes could be uneventful.

Last season, the Chargers averaged just 4.6 points per first quarter (22nd) while Washington mustered a mere 2.9 points in the opening frame – given that attack was led by Dwayne Haskins and a couple of Carolina QB castoffs.

Ron Rivera knows he has to keep the ball out of Justin Herbert’s hands and doesn’t want the second-year standout getting comfortable under center, so expect a butt-ton of handoffs and short screen passes from the WFT offense.

Both teams’ production will improve as the season goes on, but we’re going to give a tip of the cap to the stop units and take the Under 9.5 points in the opening frame of Sunday’s showdown.

Some books are dealing this 1Q Over/Under as low as 7.5 points but spots like FanDuel are hanging 9.5 with the Under juiced to -122. Even with the bigger price tag, it’s worth the 2-point difference, so shop around if you can. 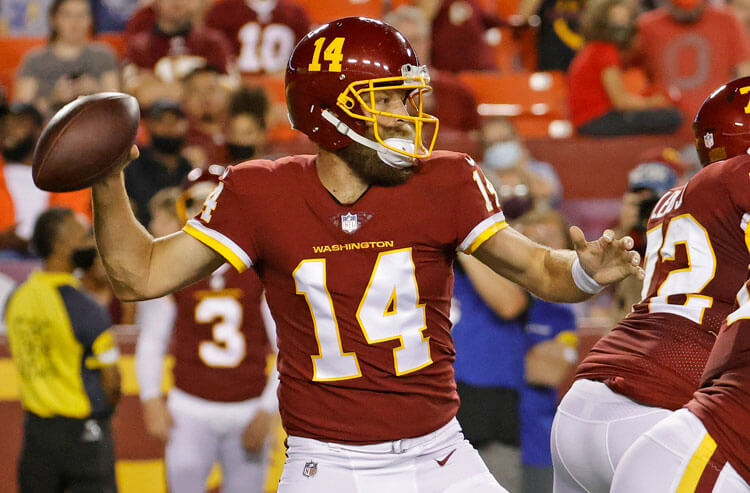 Chargers vs Washington Week 1 Picks and Predictions: WFT Primed to Give Bolts Growing Pains
Provided by