The total for this Arizona and Tennessee matchup is one of the tallest on the board, climbing from 50.5 to 52 points. Find out why we're not scared off from the Over in Julio Jones' debut with Tennessee with our Cardinals vs. Titans picks.

A non-conference kickoff is one of the more intriguing games on the NFL Week 1 slate, with the Arizona Cardinals coming to Nashville to take on the Tennessee Titans.

The NFL betting odds have hovered around a field-goal spread for this game, with Tennessee currently sitting as a 3-point favorite.

The Titans appear to have the inside track in the AFC South — possibly the weakest division in football — while the Cardinals try to claw their way to the top of the NFC West (arguably the toughest grouping in the league).

Here are free NFL picks and predictions for Cardinals at Titans on September 12.

This spread hit the board at Titans -2.5 back in May and slowly shifted to -3 over the course of the summer. Tennessee is on the board at -3 (-105), indicating a possible move back under the key number of a field goal. This total is one of the tallest on the Week 1 board, climbing from 50.5 to as high as 52.5 points. Be sure to check out the full NFL odds before placing your bets, and also view the full line movement for this game.

Tennessee is one of the better Over plays during Mike Vrabel’s tenure and is 7-1-1 O/U versus totals of 49 points or more since 2018, including 4-1-1 O/U against 50-plus numbers. Find more NFL betting trends for Cardinals vs. Titans.

Arizona is going to come out swinging, knowing it needs to put the Titans in throw mode and park burly RB Derrick Henry. The last thing the Cardinals want is Henry to get touches, rumble for first downs, and chew up the clock with a plodding offensive approach.

Luckily, the Titans defense has been terrible and is projected to stay that way in 2021 despite new coordinator Shane Bowen trying to inject this unit with intensity. Tennessee finished 29th in Defensive DVOA at Football Outsiders last season and recorded a measly 19 sacks with a pressure rate of 17.6 percent — the second-lowest mark in the league.

Kyler Murray will take another leap forward in Year 3 under Kliff Kingsbury and boasts a receiving corps with plenty of big-play options, headlined by DeAndre Hopkins. Arizona’s attack was the second fastest in the NFL in 2020 (25.06 seconds per play) and will be a challenge for any opponent in the season opener, as teams play their way into 60-minute "game shape."

The Cardinals' defense will also overwhelm its opponent with intensity. Arizona was very aggressive and disruptive on defense last year, recording 48 sacks and a pressure rate of almost 26 percent. The Titans are behind schedule on offense due to COVID-19 outbreaks shelving starters the past few weeks, including players on the offensive line.

This Titans offense is swinging without a net entering 2021, losing elite offensive coordinator Arthur Smith to the head coaching job in Atlanta. Smith receives all the credit for his play action-heavy playbook breathing life into Ryan Tannehill, who is one of seven offensive starters who passed on preseason action.

That means Week 1 is the first full-speed attempt at Todd Downing’s new offense and while adding Julio Jones to the depth chart will sell some jerseys, Tannehill lost his No. 2 and No. 3 receiving targets this offseason — Corey Davis and TE Jonnu Smith — which sets the table for a slow start. And the Titans can’t afford that.

Murray’s focus this season is running less and relying on his arm more, after posting the second-most rushing yards by a QB last season — and taking some added punishment in the process. More passes and fewer scrambles sounds good to Over backers.

The Cardinals’ run game was respectable in 2020 but lost underrated RB Kenyan Drake in free agency and doesn’t pose much of a threat, with Chase Edmonds and James Connor back there. Kingsbury called for the run on more than 44 percent of snaps last season, but that split is going to lean even more toward the air attack this fall.

While Titans new OC Todd Downing told reporters he wants to run more with Henry, he may not have a choice if Arizona dictates the pace of this game. And with Jones and A.J. Brown on the wings, there could be some pressure on him to pass it and pass it plenty in Week 1. As well, this Tennessee offense is no stranger to tempo, calling a play every 25.99 seconds in 2020.

As mentioned, this is one of the largest Over/Under numbers on the board. Bettors shouldn’t be scared off by tall totals in these NFL openers. Over the past 11 seasons, Week 1 totals of 50 points or higher have produced a 57-41 Over/Under count (58 percent winners for the Over).

Arizona has dangerous weapons in the passing game and added another with rookie WR Rondale Moore out of Purdue. The 5-foot-7 speedster is drawing comparisons to Tyreek Hill and had a solid exhibition slate this summer.

Tennessee’s passing defense ranked 30th in Pass Defense DVOA in 2020 and allowed 22 total touchdowns to receivers, which was tied for the third-highest mark in the NFL. The Titans were also susceptible to home runs, giving up 67 total plays of 20-plus yards.

Moore is a home run hitter and can hurt you in a number of ways. He’s blistering down the sideline, allowing Murray to unload his cannon arm, and can also break gains after the catch on slants. The cherry on top of this prop is that Moore could also be used in the kick return game, offering another way to find pay dirt. 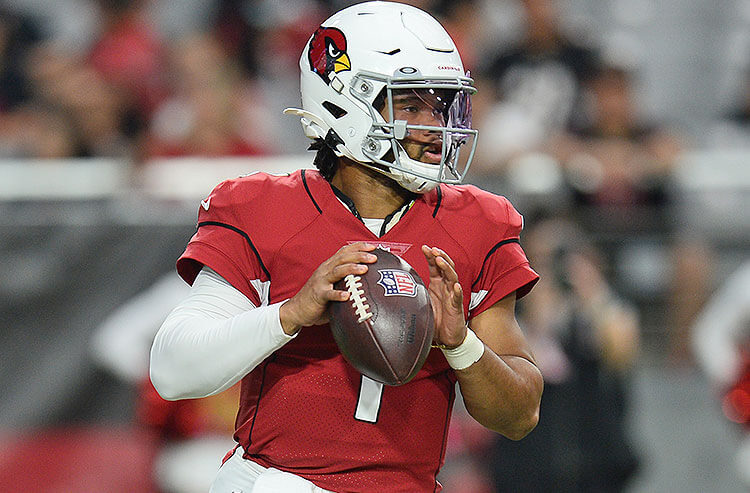