The Rams went into their bye as losers of two straight but history tells us Sean McVay will have L.A. ready to play in a big Week 12 matchup. Will that translate to a win over the Packers? Find out with our NFL betting picks.

The holiday weekend is headlined by a marquee NFC matchup when the Los Angeles Rams visit the Green Bay Packers in Week 12.

NFL betting odds opened Green Bay as a slim home favorite and some books are moving this spread as far as a pick’em, with injury concerns plaguing the Packers’ depth chart including a nagging toe ailment for QB Aaron Rodgers. The Rams are off the bye and hoping that hiatus can help stop a two-game slide.

Check out our free NFL picks and predictions for Rams at Packers on November 28.

Green Bay hit the board as a 1.5-point home favorite following Week 11’s loss at Minnesota and that spread has slowed dwindled as low as pick’em at some shops but Packers -1 is still on the board at most books. The total for this game opened at 50.5 points and has dipped to 47.5.

Under Sean McVay, the L.A. Rams are 5-2 ATS as road underdogs in conference games. Find more NFL betting trends for Rams vs. Packers.

Rams vs Packers picks and predictions

The bye week came at a crucial time for Sean McVay’s Rams, as the team tumbled on a two-game bump with bad efforts on both sides of the football. Los Angeles was outscored 58-26 in those losses to Tennessee and San Francisco, but this team is too talented to stay down for long.

The Rams did get a little fat and cocky after blowing through subpar competition like the Giants, Lions, and Texans before that two-game wake-up call. In the grand scheme of things, however, this club still ranks sixth in DVOA at Football Outsiders and McVay is a master of making adjustments, with a 4-1 ATS mark when given a bye.

The main culprit for this skid was shaky play from QB Matthew Stafford, who after burning up the league with his passing prowess through the first eight games (+0.388 EPA per dropback) has thrown two touchdowns to four interceptions with an average of only 9.42 yards per completion, compared to 12.8 before that skid.

We’ve seen top-tier quarterbacks have their ups and downs already this season, as teams get more tape and regression sets in. And to Stafford’s defense, his two INTs versus San Francisco in Week 10 were the products of crossed wires with new WR Odell Beckham Jr. on a deep shot and a bobbled ball on a flat pass.

Stafford is no stranger to Lambeau Field or the antics of the Cheeseheads, having gone head-to-head with Green Bay as a long-time Lion, so he won’t be rattled by the atmosphere for this 4:25 p.m. ET kickoff, nor the near-freezing temperatures of the Wisconsin winter.

His counterpart, Aaron Rodgers, could have a tougher time this Sunday. He's not only battling through a painful toe injury that was reaggravated in Week 11’s loss to the Vikings but also facing Los Angeles’ vaunted pass rush. The Rams sit sixth in the NFL with 29 sacks and will try to put Rodgers on the move, testing his mobility as well as a Packers offensive line down to third-stringer Yosh Nijman protecting Rodgers’ blind side.

The status of RB Aaron Jones (knee) is still up in the air for Week 12 and Green Bay got just 74 rushing yards on 17 carries from the running backs last Sunday. Without that threat of a ground game, L.A. can go all-in on bringing the heat while letting its talented secondary tie up the Packers' receivers in man coverage. Rodgers was sacked twice and hit four times by the Vikings last Sunday.

With a bye just around the corner and the NFC North pretty much locked up, this banged-up Packers team could "pack it in" – looking ahead to the home stretch - if the Rams come out aggressive on both sides of the ball on Sunday. Los Angeles is 25-11-1 ATS in its last 37 conference games and owns a 5-2 ATS mark as a road underdog in those NFC contests.

The Rams won’t just waltz into Lambeau for an easy win on Sunday. This will be just the fifth home game of the season for Green Bay, which has limited opponents to only 11 points per game in those previous four home stands.

Granted, those contests came against much lesser offensive powers than the Rams' potent attack, but the Cheeseheads allow a mere 0.181 points per play in front of the Green Bay faithful and sit 12th in pass defense DVOA on the season.

If McVay is at all protective of Stafford after two bad games, he’ll lean into his rushing playbook which hasn’t seen much action in recent outings, calling runs on only 32 percent of snaps the last three games. The Rams do get gains in those rare handoffs, picking up five yards per carry and sitting ninth in EPA per handoff since Week 8.

The Niners were able to pull the plug on L.A.’s offense by dominating possession with a grinding ground-and-pound approach in Week 10, something the Rams can’t afford again. Green Bay’s defense is susceptible to the run, ranking No. 26 in run defense DVOA, and McVay could play a little defense on offense with a more patient playbook packed with clock-eating carries.

This total opened as high as 50.5 points on Sunday night and quickly sunk as low as 47.5, with early play on the Under and action fading the hobbled Packers offense.

Los Angeles is among the quicker offensives in terms of tempo, snapping the ball every 26.89 seconds, but with plenty of respect being paid to Rodgers and the Green Bay offense, McVay will slow things down a touch and take every second of possession away from the Cheeseheads.

As for the Packers, they’re the most methodical attack in the land, running an offensive play every 30.63 seconds. If the L.A. pass rush can take advantage of that softened protection, Rodgers won’t have time for those deep looks downfield, keeping this passing game short and snappy.

Los Angeles is 1-3 Over/Under in its last four games while the Packers have been one of the best Under plays in football, staying below the number in all but three of their 11 outings in 2021. 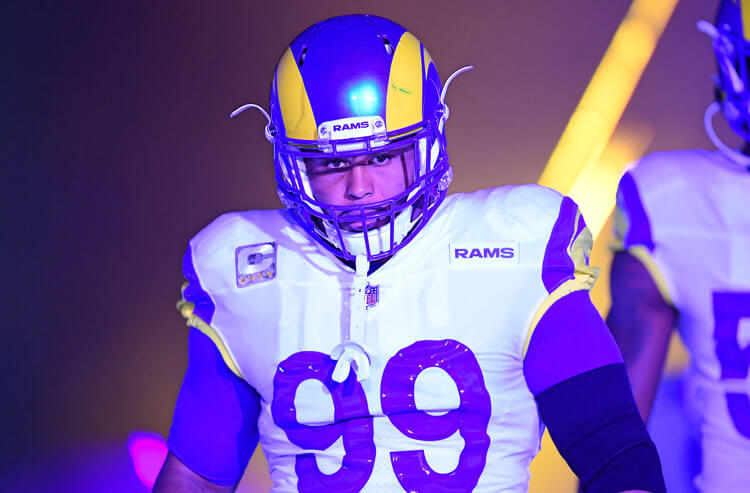