The Chargers delivered an emphatic win in Los Angeles last week but face another stiff test in Week 12, headed to Denver for a dance with the Broncos. Find out if L.A.'s strong play can continue in a divisional matchup with our NFL betting picks.

It's an AFC West battle at altitude on Sunday, as the 6-4 Los Angeles Chargers visit the 5-5 Denver Broncos, with both teams jockeying for position in a top-to-bottom competitive division.

After a thrilling win over the Steelers on Sunday Night Football, L.A. is a 2.5-point NFL betting favorite against a rested Denver team coming off its bye.

Here are our NFL picks and predictions for Chargers vs. Broncos, with kickoff on November 28.

The Chargers are 5-0 ATS in their last five games in the AFC West. Find more NFL betting trends for Chargers vs. Broncos.

Chargers vs Broncos picks and predictions

While the Chargers ride the high of their Sunday Night Football victory into Denver, the Broncos went into the bye with a whimper. Denver followed up a bizarre, decisive win over the Cowboys in Dallas with a flat showing against the Eagles at home, falling 30-13 as it was run over by Jordan Howard and Boston Scott.

The Broncos' loss to Philadelphia was a continuation of what has been a largely gross six weeks, with the win in Dallas an outlier in an otherwise mediocre stretch of play. And, ultimately, with their 3-0 start far in the past, the Broncos are just that: mediocre.

Nearly every metric puts the Broncos' offense as an average-or-worse unit, with the latter more accurately depicting the team as of late. Their defense, which is supposed to be the strength of the team, is even worse as it ranks 26th in DVOA and a discouraging 28th in weighted DVOA. Their rank is quite amazing when you consider they held one of the league's most lethal attacks in Dallas to just 16 points.

The Broncos can't stop the run and have seen every starting-quality linebacker go down this year. Their secondary sits off receivers and has allowed the highest average depth of target in the NFL — which hasn't helped to limit explosives, as the Broncos have allowed the 11th most explosive passes this season.

What Denver's defense does well, pressure the quarterback, is worryingly unsustainable. Von Miller is with the Rams, Bradley Chubb's been limited to one game, and Malik Reed, who has been excellent as a rotational rusher over the last two seasons, is averaging career-low pressure and hurry rates as he's been forced into a larger role.

The Broncos' pass rush is in a particulalry poor matchup here, as the Chargers' line ranks third in adjusted sack rate, and center Corey Linsley is among the league's best at making protection calls at the line — offering an effective counter to a Vic Fangio defense that loves to disguise pressure and confuse opposing pass pro.

Denver is a middling team with a rare good performance in it, while L.A. is a solid team with a mile high ceiling. We'd feel good about taking L.A. as field goal favorites but getting it at -2.5 is even better.

After a month of self-sabotage, the Chargers let Justin Herbert and the offense cut loose in Week 11 to roaring results. Topping 40 points for the second time this year, L.A. averaged an absurd 52.1 yards and 4.1 points per drive (excluding the final series of kneel-downs). For his part, Herbert averaged his third-highest adjusted yards per attempt of the season as he was able to push the ball downfield more often than in recent weeks.

However, it's still early to declare all-good with the Chargers' confounding offense. A series of errors, including a pick and a blocked punt, kept the Steelers in the game and forced L.A. into aggression that otherwise may not have come. And, while Herbert and the passing game extended a bit compared to recent weeks, it was still just seven of 41 attempts that went 15+ yards. It's worth noting that this came against a Pittsburgh defense that was without its rangy free safety, Minkah Fitzpatrick, too.

Until we have a decent chunk of evidence suggesting otherwise, it's safe to assume L.A.'s offense is unchanged. That means an efficient, methodical, mistake-free attack. Good enough to win games but not exactly a recipe for fireworks.

The Broncos, for their part, aren't even deserving of such a lukewarm endorsement. Denver is a middle-of-the-road offense, 15th in DVOA both season-long and weighted. For the boon that is Jerry Jeudy's return and a talented cast of pass-catchers around Teddy Bridgewater, there's the disadvantage of Bridgewater's backsliding play and an insistence on playing Melvin Gordon over Javonte Williams.

As the Broncos' DVOA mark suggests, their efficiency is hardly terrible and they are 15th in yards per drive, too. However, there's a reason why the 15th ranked offense is 24th in scoring — they can't finish drives. Denver is 29th in the league in red zone scoring rate and 21st in points per drive. Bridgewater's refusal or inability to throw into tight windows has effectively neutered an offense with genuine talent across the formation around him.

All signs point to this being a methodical game between Denver (2-8 O/U) and L.A. (4-6 O/U). The game clock should be on our side, too, as the Broncos are the third-slowest offense in neutral situations in the league, and while the Chargers are among the quickest, the thin air of Denver may have them playing a little slower than in the comfortable conditions of SoFi.

Week 11 was a masterclass in all that Ekeler can do for an offense, as he totaled 11 carries and six catches, averaging over 4.5 yards per carry and nearly 11 yards per reception — with four scores to boot.

Ekeler's 65-yard night through the air against Pittsburgh was the sixth time this year he has topped 30 yards receiving (and he had another 28-yard receiving day). One of the NFL's best and most versatile satellite backs for several seasons now, we can expect another solid receiving game for Ekeler in Week 12.

As is the norm for a Fangio defense, the Broncos have blitzed at a high rate this year, with a 33 percent rate the fourth-highest in the NFL. The additional heat has been productive, with the sixth-highest hurry percentage and 13th ranked pressure rate in the NFL.

Herbert has been fairly adverse to pressure this season, not only because of a strong offensive line but also his ability to rapidly go through progressions. With a safety valve like Ekeler, Herbert can get the ball out as soon as his internal clock nears zero. The second-year passer will need to be on point with his timing Sunday and against the Broncos' pass rush, that'll mean finding Ekeler often. Once Ekeler catches the ball in space, he'll be free to pick up huge chunks of yardage against a depleted Denver linebacker corps. 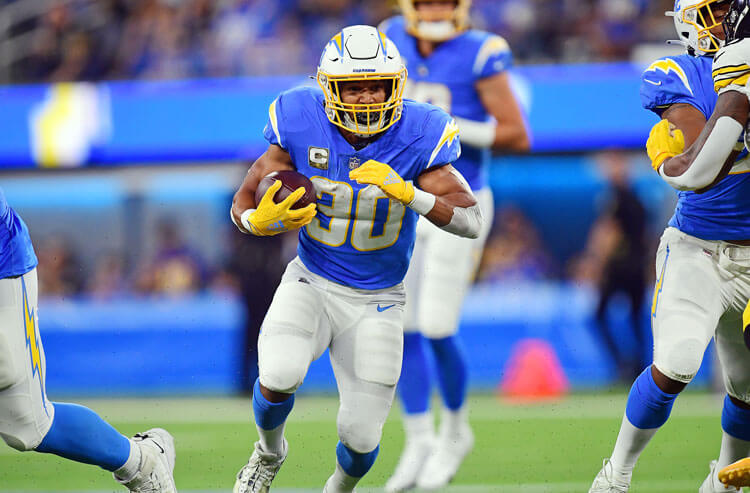 Chargers vs Broncos Week 12 Picks and Predictions: L.A. Goes on a Mile High Mission
Provided by