Vikings vs 49ers Week 12 Picks and Predictions: Norseman Not Dead Yet

The Vikings and 49ers were counted out early in the season but have clawed back to .500 and ride two-game win streaks into Week 12. Minnesota has a great shot at winning outright as NFL betting underdogs — find out why with our picks.

If you’re betting on this game then you’ll need our NFL picks and predictions for the Minnesota Vikings vs. San Francisco 49ers.

Since the lines opened, we’ve seen the 49ers move from 2.5-point favorites to 3-point favorites. We’ve also seen the points total rise from 48 to 49. Use the live odds widget above to track any future line movements right up until kickoff and be sure to check out the full NFL odds before placing your bets.

The Vikings are 4-0 ATS in their past four road games. Find more NFL betting trends for Vikings vs. 49ers.

Vikings vs 49ers picks and predictions

Both teams sit on 5-5 records and come into this matchup on two-game winning streaks. The 49ers took the Jacksonville Jaguars apart last Sunday, following up a very impressive win over the Rams a week earlier. Meanwhile, the Vikings defeated the Packers at the death last week, having beaten the Chargers a week earlier.

The Vikings have been a tricky team to understand this season. All but one of their games has ended with the Vikings within a score of the other team, for better or worse. They’ve had a fairly tough schedule along the way, too, which makes their 5-5 record all the more impressive. There’s little doubt in my mind that the Vikings are the best team in the NFL without a winning record, even ahead of their rivals on Sunday.

Beating their NFC North rivals is never easy but the Vikings pulled it out of the bag against the Packers last week. They only won the game in the final seconds but it was a good performance. Kirk Cousins threw for 341 yards, 169 of which went to Justin Jefferson, with the sophomore hauling in his eight targets for two touchdowns. Dalvin Cook rumbled for 86 yards and a touchdown and caused the Packers problems on the ground.

Kyle Shanahan’s offense has also hit form, scoring 111 points in their last four games, averaging an impressive 27.75 points per game. Jimmy Garoppolo is still under center and has struggled at times, with one badly thrown pass to Jeff Wilson against the Jaguars a real indictment on his ability. Regardless of that, he’s still the signal-caller for this team but he isn’t the real star — that’s Kyle Shanahan. He’s turned the talented Deebo Samuel into a utility tool who is a star on that Niners offense. He ranks number one in missed tackles forced per carry (25+ carries) since 2019, per PFF, and has really broken out this year.

So, we have two fairly well-matched teams here, both similar in defensive ability, with identical records and capable of great moments on offense. When it comes to picking a side, we have to look at the Vikings to cover. They have an uncanny ability to stay within stinging distance of whoever they face and the 49ers aren’t clinical enough. I’m happy taking the Vikings on the moneyline so to get the extra 3 points on the spread is a real blessing.

Neither of these teams has an elite defense, despite recent reputations. The Niners are ranked 12th in weighted defensive DVOA, two spots ahead of the Vikings, and both teams have given their opposition opportunities in recent weeks. That leads me to think that both of these dynamic offenses will be free to put up points and end up in yet another shootout for the Vikings.

Given their habit of getting into high-scoring games, it’s no surprise that the Over is 6-1 in the Vikings past seven games on the road. The trends also point us towards the Over for the 49ers, with the Over 6-1 in their past seven games following an ATS win. We’ll be following the trends and backing this game to become another high-scoring shootout, which should easily go Over the 49 point total.

Remember when the season started and second-year receiver Brandon Aiyuk wasn’t getting much game time? All the armchair experts on social media fumed and fantasy managers were angry that their high drafted wideout wasn’t doing much. It’s now safe to say that the tides have turned and Aiyuk has done his time on Kyle Shanahan’s doghouse.

Samuel has rightly been the big story for this 49ers team but Aiyuk has really come up on the inside in the past month. In his last four games, Aiyuk has had target shares of 25.9, 20.5, 21.1, and 36.8 percent. That leads up to Sunday’s game, where the sportsbooks have set the line on Aiyuk receptions at 4.5. That’s a number we’ll be hitting the Over on all day.

Over the past three games, Aiyuk has seen 19 targets, 16 receptions, 200 yards and two touchdowns. When a player is ascending like this, you have to back him to continue that form. It’s worth considering Aiyuk for other prop markets, including anytime touchdown scorer and receiving yards, but I feel it’s this prop, total receptions, that gives us the best opportunity of a win and at +130 it’s a great price too. 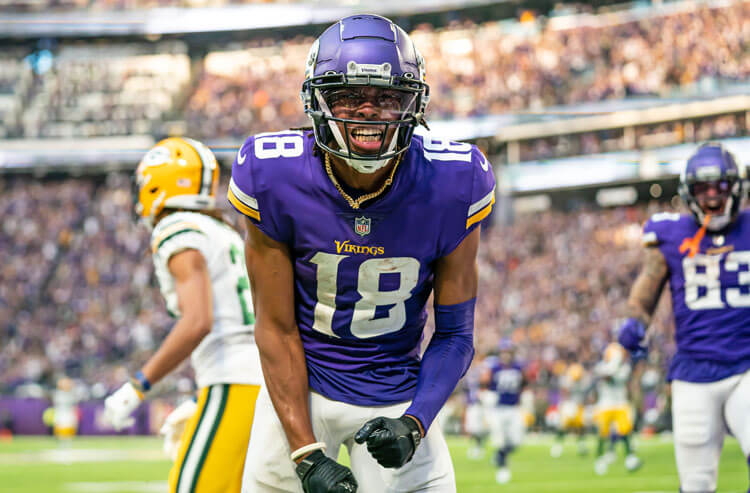 Vikings vs 49ers Week 12 Picks and Predictions: Norseman Not Dead Yet
Provided by