NFL Week 11 Bet Now or Bet Later: Smash the Over in Cowboys-Chiefs as Soon as Possible

The Cowboys keep running up the score week after week and are primed for a shootout showdown against Patrick Mahomes and the Chiefs in Kansas City in Week 11. Take advantage of the early Over/Under being set at a conservative 53.5 and grab the Over before 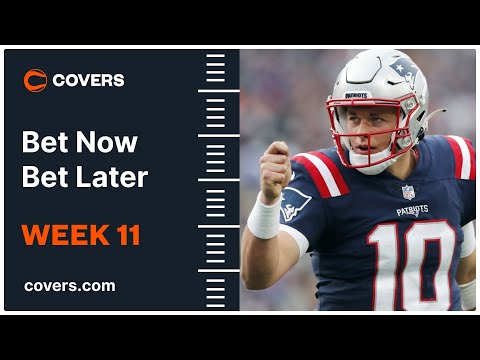 There are a lot of NFL betting tips and techniques out there as well as a butt-load of advanced data and analytics, but they don’t mean crap if you aren’t getting the best odds for your NFL wagers.

Locking down the best of the number means planning your NFL Week 11 bets, and knowing the best spreads and totals to bet now and which lines you should wait to bet on later.

We help you with just that. Here are our NFL bet now, bet later lines.

New England has won four in a row and five of its last six, with that lone blemish coming in a wild overtime loss to Dallas. The Patriots’ latest victory was a one-sided smashing of the Cleveland Browns, rolling to a 45-7 home win in Week 10.

Bookies had this lookahead line around Patriots -3.5, but the official Week 11 opener hit the board at New England -5.5 with that spread juiced to -115, indicating a quick move to the key number of -6 if early action sides with Bill Belichick’s squad.

And why wouldn’t it? Atlanta was thumped 43-3 at Dallas on Sunday – a loss so bad both teams pulled their starters in the third quarter. On top of that miserable effort from the Falcons, this franchise has had trouble with non-conference competition since 2018 going 18-25 ATS versus AFC opponents and, of course, the ghosts of 28-3 are still haunting Atlanta.

The Vikings put in an impressive road win in Los Angeles in Week 10, digging in for the victory in a tough schedule spot (second straight roadie) after a physical OT loss to Baltimore the week before. Now, Minnesota returns home for a classic NFC North rivalry with the Packers, and opened as a 2.5-point home dog in Week 11.

If you’re buying into the Vikes, who are 9-3 ATS as home underdogs under Mike Zimmer (since 2014), then pump the breaks on the longboat and wait for this spread to climb to a field goal – or beyond. Minnesota +3.5 isn't out of the question.

Green Bay opened -2.5 (-115) at most books, coming off a grinding win over Seattle at home on Sunday. The Packers have played in some tough games and this defense has held the team together through its controversial COVID outbreak. However, the Cheeseheads are likely down RB Aaron Jones, who suffered a sprained ACL in Week 10.

The Chiefs are battling the Raiders as I write this (Sunday night) but the lookahead total for this game set back in the spring was as big as 55 points and shrunk to 53.5 as of last week. Some online books are hanging 53.5 Over/Under while the Sunday night game is in action, but regardless of how that contest shakes out (barring an injury to Patrick Mahomes), this total is going up.

Dallas destroyed the Falcons in Week 10, posting 431 total yards – thanks in part to some takeaways – and 43 points, marking the third time this season the Cowboys have blown through the 40-point plateau. Dallas ranks No. 5 in EPA per play (+0.101), headlined by a passing game that just got stronger with the return of WR Michael Gallup on Sunday.

The Chiefs offense wasn’t right heading into the Sunday night game but still holds a lot of weight with bookies and bettors. Mix in a soft Kansas City secondary unit, and this one is shaping up to be a shootout in Arrowhead Stadium for this 4:25 p.m. ET kickoff. Like I said, barring something whacky in the Week 10 matchup with Vegas, this total - whatever it ends up opening at early Monday morning - it's going to run.

The lookahead line for this AFC South matchup was 46.5 points last week and the opener hit the board at 45.5 Sunday night, with early money on the Over ticking up the vig from flat -110 to -115. If you’re thinking Under in this Week 11 contest, set a reminder in your phone to check back later and see how high this one has climbed.

Houston is Houston. The Texans have scored in single digits (or not at all) in five of their last seven games but rank 30th in yards allowed and 29th in points given up. Houston is coming off a bye week and will have two weeks to game plan for the Titans, who are down top stars RB Derrick Henry and WR Julio Jones.

Tennessee is winning but this offense is far from explosive, averaging just 4.8 yards per play over the last three games, including 4.6 yards per play against New Orleans in Week 10. This homestand with hopeless Houston could serve as a bit of a breather for the Titans after running a gauntlet the past five games (Buffalo, Kansas City, Indianapolis, L.A. Rams, New Orleans), so if you smell a letdown, wait and bet the Under later.

NFL Week 11 Bet Now or Bet Later: Smash the Over in Cowboys-Chiefs as Soon as Possible
Provided by