As someone confined to only picking NFL underdogs, Week 10 has me nervous. In fact, the rest of the season has me apprehensive about taking the points each week.

However, the gambling gods love to keep things balanced. Will that equalizer start Sunday or does the “dog and pony show” that is 2020 keep rolling out whacko results?

For the sake of my NFL picks and predictions for Week 10, let’s hope it’s “on with the show” this Sunday.

This Week 10 AFC West rivalry was supposed to be a special game for my good buddy and Covers senior writer Patrick Everson. The Colorado native turned resident of Sin City should be in the stands cheering on his Broncos against the hometown team. But COVID-19 is a dick.

The next best thing is betting on Denver. I'm taking the Broncos not only in honor of Patrick’s fandom, but because of what I’ve seen from this team the past few weeks.

Quarterback Drew Lock is really growing into the role of QB1, helping give balance to this Broncos offensive attack, which has totaled 58 points the past two weeks and now takes on the Raiders’ wretched defense. As for the Denver defense, it’s turned up the intensity with 18 sacks in the last five outings and faces a banged-up Raiders offensive line.

The Broncos are 7-3 ATS in their last 10 games on the road and would love nothing more than to soil the fancy sod with a visiting victory in their first trip to the new Allegiant Stadium.

Fins Fever is running hot since Miami made the move to rookie QB Tua Tagovailoa, but while the first-year passer is selling plenty of jerseys ahead of the holiday season, he isn’t really fuelling the franchise’s turnaround.

The Dolphins have won four in a row (two with Ryan Fitzpatrick under center) and have received a huge helping hand from defensive and special teams scores the past two contests. Miami has registered two scoop-and-score TDs as well as a punt return touchdown in victories over the Rams and Cardinals.

Sure, football is a team game, but those are some whacky results that you just can’t count on week-to-week. The Dolphins defense has been good during this streak, but it faced a broken 49ers team, the Jets ('nough said), an OK Rams offense (still gave up a ton of yards), and allowed 31 points to the Cardinals last Sunday.

I’m not drinking the coral and aqua Kool-Aid.

The Bolts, on the other hand, might be the best 2-6 team in football. Los Angeles’ six losses have all been one-possession games with five of those defeats coming by five points or less and two in overtime (vs. Saints and Chiefs).

Even if the Chargers won't have DE Joey Bosa (concussion) to put the fear of god into Tua, Miami will be without WR Preston Williams as well as possible gaps in the backfield. This Fins offense has been outgained 913-457 over the past two games, including just 145 yards versus the Rams.

Despite its record, Los Angeles is 5-3 ATS on the season, and the Chargers as a franchise have always traveled well getting the points, going 34-15-4 ATS in their last 53 outings as road underdogs.

In this week’s “betting the best team getting the points”, we find the Seahawks catching a deuce in L.A. after an embarrassing loss in Buffalo last Sunday.

People have been waiting for the other shoe to drop on Seattle for a while now, and by “other shoe” I mean this piss-poor defense. The Seahawks bring up the rear in yards and points allowed, but take on a Rams offense that has no idea who or what it is.

Los Angeles had to do some soul searching during its Week 10 bye, coming off a rough loss to Miami in which the team outworked the Dolphins 471-145 in terms of yardage but Jared Goff threw two interceptions and fumbled twice.

The Rams defensive numbers look really nice on the outside, but slicing them open reveals a soft gooey schedule against some of the most anemic offenses in the game (NFC East teams, injury-plagued 49ers, and Da Bears). In its lone matchup with a competent scoring attack, L.A. was whacked for 35 points by the Bills in Week 3.

Underdogs have dominated the betting results in this NFC West rivalry, with pups going 14-6 ATS in the last 20 matchups between the Seahawks and Rams. Seattle is also 35-17-3 ATS in its previous 55 games getting the points. Gimmie the soon-to-be MVP and the +2. 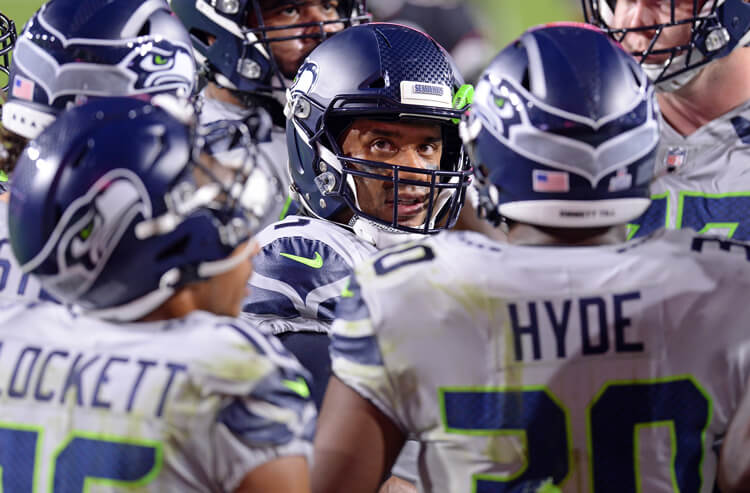