For the first time in many moons, NFL odds won't be the singular focus of the gambling world this Sunday. That's thanks to the 2020 Masters, which is happening in November instead of April because of-course-it-is-it's-2020. That hasn't deterred the staff at Covers, however, from still getting in their weekly parlay and teaser picks, where we saw just one staff member claim victory in Week 9. But hey that's progress, right?

As we navigate through what seems to be the NFL betting equivalent of Amen Corner, there's plenty of similarities between the action in our office and the action at Augusta: staff rookie AJ Salah is like Collin Morikawa, the hotshot newcomer that seems to be getting lots of attention. Andrew "Taco" Caley, our defending champion, gets to don the mantle of Tiger Woods (though we can't confirm if he looks good in red). Jared Hochman is our swing-for-the-moon big hitter like Bryson DeChambeau (looks cool, but can it actually win?) and Jameson Mossman like that amateur that shoots +10—at least he gets a participation trophy.

While the winner of our proverbial Green Jacket won't be crowned this Sunday, every week counts. Here's our best Week 10 NFL picks and predictions:

Two losses in a row for the Champ? Well, let me tell you something, brother! The Champ won't stay down for long!  The Saints should roll at home against the Niners B squad. Joey B should keep the Bengals close, COVID or not for Big Ben. And the Ravens ain’t losing to the Pats on Sunday night, brother!

Using the 6-point teaser to shrink some faves and beef up some dogs in Week 10. Moving Seahawks to +8 at L.A. Rams, Chargers to +7 at Miami, dropping Baltimore to -1.5 at New England, and shrinking Pittsburgh to -1.5 vs. Cincy.

After another rough week, I face an uphill struggle making my comeback a true underdog story. True to form, I’ve taken a couple dogs (Bills/Chargers) in this week’s teaser and need some favorites (Steelers/Bucs) to do their job and win.

No more bleeding my own blood, the comeback starts now!

There once was a pick-master named Mookie,
Whose last few teasers were more like fresh dookie.
These are desperate days,
So he's switching up to parlays,
Be sure to take these picks straight to your bookie.

The Pats look bad in the Post-Tom Brady era and if they could barely scrape by the Jets, they're gonna get clobbered by the Ravens. The 49ers are still fielding a team of second-string players and taking on a Saints team coming off a dominating win over the Bucs will be a tough task. And speaking of Brady and those Bucs, they'll bounce back against the Panthers, who will once again be missing superstar Christian McCaffrey.

Bleeding a bit over the last two weeks so it's time for a winner. The Eagles are getting healthier so we're going to take them on the moneyline. Then we're gonna pull a couple of 'dogs through key numbers with alt spreads with the Chargers +8 and the Broncos +10.5, while adding the Saints at -3 for the icing on the cake.

Our parlay last week was the gambling equivalent of the Bucs' SNF effort: Coming in riding some decent momentum and just completely getting our ass handed to us.

Had to cobble this week in between Masters sweats, so hopefully this pans out: Seahawks getting points vs. the Rams, Ravens to pummel the lost Patriots, and Chargers to perform better than their record suggests (plz don't burn me again, Tua).

I think I've only won one of these 3-team parlays all season, so heaven help you if you're tailing my plays.

We’re submitting picks on Friday the 13th. While my weekly picks have been about as safe as any visitor to Crystal Lake, remember that it’s Friday the 13th in 2020.

Wacky stuff is likely to happen in this New Beginning of a weekend, so we’re picking with the hopes that my spot in the standings doesn’t get slashed down to resemble a terrible 2003 crossover horror film.

10-5 with my sides and totals last week and I couldn't manage a simple three-team moneyline parlay again last week. I got one more week before we blow this strategy up.

The Saints came out of the bye on a mission and will wreck a San Francisco team that has packed it in. The Pats almost lost to the Jets, 'nuf said—Baltimore rolls. And an underdog special as the Broncos roll the Raiders and their terrible defense.

Standings are somewhat irrelevant — if you're not first...you're last.

Where can I make parlay and teaser bets online? 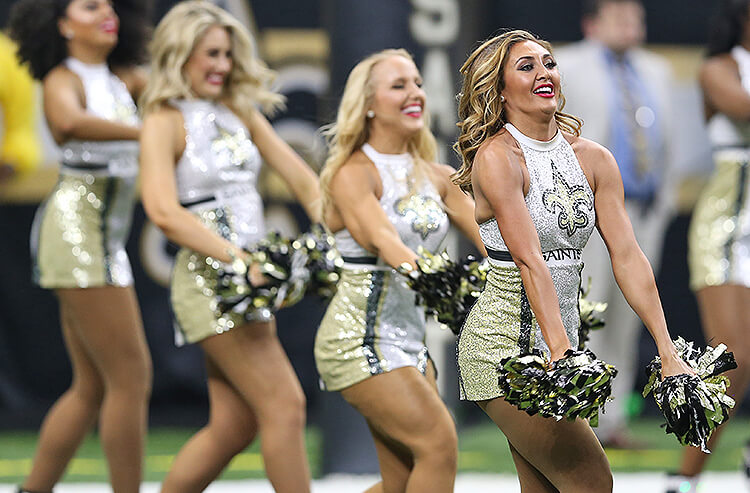