NFL Week 9 is in the rearview mirror, NFL Week 10 odds are on the board, and several betting factors are already in play. That includes the typical injury news, which could see Christian McCaffrey out again after finally returning in Week 9.

This week’s NFL Cheat Sheet serves as one-stop shopping for that information and more. Covers checks in on NFL Week 10 injuries, weather, consensus picks, Pros vs Joes and more. Check back throughout the week for NFL injury updates, popular picks, and notable contrasts between sharp bets and public money.

Carolina Panthers: After missing six games with an ankle injury, McCaffrey had a huge return with 151 yards from scrimmage and two touchdowns in a 33-31 loss at Kansas City. But he also suffered a shoulder injury and on Friday was deemed out for Sunday's home game against Tampa Bay. The SuperBook opened this game at Panthers +4.5 and got as high as +6.5 Monday, then went back to +4.5. However, the McCaffrey news helped send this line to +6 by Friday night. "McCaffrey is worth about a half-point to the spread, maybe one point," SuperBook manager/oddsmaker Eric Osterman said.

Pittsburgh Steelers: Quarterback Ben Roethlisberger was taken off the reserve/COVID list Saturday after passing tests all week, as he was never positive, but was in the COVID protocol due to contact tracing. Pittsburgh opened -9.5 against Cincinnati at The SuperBook and dropped to -7.5 Monday, with some of that due to sharp Cincy money, and the game then came off the board Tuesday on the Roethlisberger news. The game went back up Saturday morning at Steelers -7.5.

Seattle Seahawks: Seattle hoped running backs Chris Carson (foot) and Carlos Hyde (hamstring) could return for a road game against the Los Angeles Rams, but on Saturday, both were ruled out. It's the Seahawks' third straight game without Carson and Hyde. The Seahawks opened +1.5 and the line on Saturday moved from +2 to +2.5.

Chicago Bears: Running back David Montgomery is in concussion protocol and will not play in the Monday nighter against Minnesota. That was a factor in The SuperBook’s decision to open Chicago a 2.5-point home underdog, and line moved to Chicago +3 on Friday.

Arizona Cardinals: On Friday, running back Kenyan Drake was listed as questionable for Sunday's home game against Buffalo. But Drake's uncertain status was already baked into The SuperBook's odds cake, and in fact, the Cards are up to -2.5 after opening -1.5.

Cleveland Browns: On the positive injury front, running back Nick Chubb (knee) returns from injured reserve and will play Sunday against Houston. And indeed, Cleveland was on the move at The SuperBook, up to -3 by Monday morning after opening -1.5, then stretching to -4 by Friday night.

Houston Texans: Running back David Johnson remains in concussion protocol and won't play at Cleveland. The Texans are now up to 4-point underdogs in Sunday's game.

Los Angeles Chargers: Running back Justin Jackson (knee) is out for a second straight week, and defensive end Joey Bosa (concussion) won't play at Miami either. That said, the Dolphins opened +1 at The SuperBook and got as high as +2.5, but were +1.5 Friday night.

Miami Dolphins: Running back Matt Breida (hamstring) is questionable Sunday against the Chargers. Miami was -2.5 Thursday morning, then dipped to -1.5 Thursday afternoon at The SuperBook.

Philadelphia Eagles: The Eagles on Friday moved from -3.5 to -4 against the Giants at The SuperBook, in part on the news that they're getting healthy. Wideout Alshon Jeffery (foot) is set to play his first game of the season, and running back Miles Sanders (knee) is expected back after getting hurt in Week 6. Pro Bowl right tackle Lane Johnson (ankle) is also expected to play.

Detroit Lions: Quarterback Matthew Stafford cleared concussion protocol after getting shaken up in Sunday’s loss at Minnesota, but the Week 10 home game against Washington remained off the board all week at The SuperBook. On Saturday morning, with it looking as if Stafford is a definite go, the line went up at Lions -4.5, but was bet down to -3 by Saturday afternoon.

Jacksonville Jaguars: Quarterback Gardner Minshew (thumb) will sit out again this week, missing Sunday's game at Green Bay. But that was pretty much expected at The SuperBook, where Jacksonville opened +13.5, made trips to +14 and +13 and was back at +13.5 Thursday night.

Indianapolis Colts: Wideout T.Y. Hilton (groin) missed the Week 9 loss to Baltimore, but it appears he’ll be a go Thursday night at Tennessee. Indy opened as a 2-point underdog and stretched to +2.5, but The SuperBook moved to +1.5 Monday afternoon. By Wednesday, it was clear Hilton would play, and that along with some sharp action prompted The SuperBook to move this game to pick 'em.

Tennessee Titans: Wideout Adam Humphries will miss his second straight game while in concussion protocol. The SuperBook opened Tennessee -2 for Thursday night's home game against Indianapolis and initially moved up to -2.5, but the game is now down to a pick 'em.

Philadelphia Eagles at New York Giants: Sunday's forecast is calling for winds between 15-25 mph and possible showers toward the end of this 1 p.m. ET start. Despite that prospect, the total has been at 44.5 since Wednesday at The SuperBook, after opening at 42.

Jacksonville Jaguars at Green Bay Packers: The forecast for Lambeau Field is calling for temperatures in the high 30s with wind gusts blowing west at up to 30 mph. Morning showers are expected to stop by the 1 p.m. ET kickoff. This total has moved from 54.5 to 47.5 points.

"Green Bay’s supposed to have a bunch of wind, Cleveland a bunch of wind (see below), both look to be nasty," William Hill US director of trading Nick Bogdanovich said. "Wind is the worst when projecting the total. Rain and snow doesn’t mean nearly as much. The wind is the key."

Houston Texans at Cleveland Browns: Morning rain is expected to give way to cloudy skies midway through this early kickoff, but as Bogdanovich alluded to above, winds of 25-40 mph are expected in Cleveland, with gusts of potentially 50 mph.

"With the brutal wind, that means a lot more running, hard to throw obviously," Bogdanovich said. This total has seen a massive drop from 55 to 45.5 as of Sunday morning.

Cincinnati Bengals at Pittsburgh Steelers: Afternoon rains are expected to stop in time for this 4:25 p.m. ET start, however, winds are blowing WSW at speeds up to 30 mph. The total opened at 46.5 last Sunday at The SuperBook, then the game was off the board all week due to Ben Roethlisberger's uncertain status. The Over/Under is sitting at 46 points as of Sunday morning.

Baltimore Ravens at New England Patriots: The forecast calls for a 100 percent chance of rain early Sunday evening, along with winds of 15-25 mph and stronger gusts possible. This total opened 40.5 and has climbed as high as 44 before ticking down to 43.5 as of Sunday morning..

Minnesota Vikings at Chicago Bears: The Week 10 Monday Night Football matchup is calling for cold temperatures in the low 30s in Chicago with partly cloudy skies and winds blowing up to 20 mph. The total for this NFC North matchup opened at 46.5 and is down to 43.5 points.

Denver Broncos at Las Vegas Raiders: The Raiders opened -4 and stretched to -5 at The SuperBook, but ticked to -4.5 Thursday in what's shaping up to be a sharps vs. public contest. "We're getting a lot of parlay money on the Raiders, but we have some sharp play on the Broncos," SuperBook manager/oddsmaker Eric Osterman said.

Jacksonville Jaguars at Green Bay Packers: "We opened the Packers as 14-point favorites against the Jaguars and expected the line to either hold steady or move out beyond two touchdowns," PointsBet USA's Patrick Eichner said Friday. "Instead, we saw a ton of sharp money come for the Jags at +14, which caused a line move into 13.5 and even 13 for a few hours on Wednesday." The line then ticked up to Green Bay -13.5. "Joes are all over the Pack, which is attracting 73 percent of bets and 81 percent of handle."

Buffalo Bills at Arizona Cardinals: Arizona opened -2 and up to -2.5 at PointsBet USA, but tickets and money are in the 2/1 range on the short road 'dog Buffalo. "Pro players on the Cardinals, while the Joes are on the Bills coming off another big win against the Seahawks." 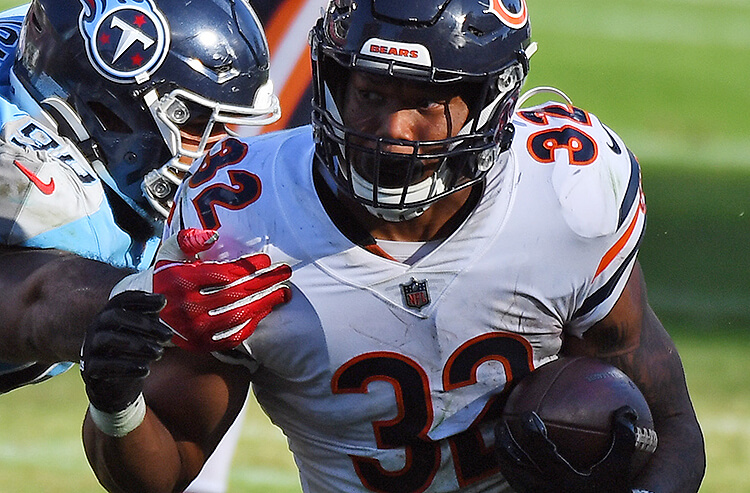