The Packers were humiliated in Week 1, but that thumping looks like an outlier. They'll fare better going up against arguably the NFL's worst defense in Week 2, as our Lions vs Packers Monday Night Football picks explain. 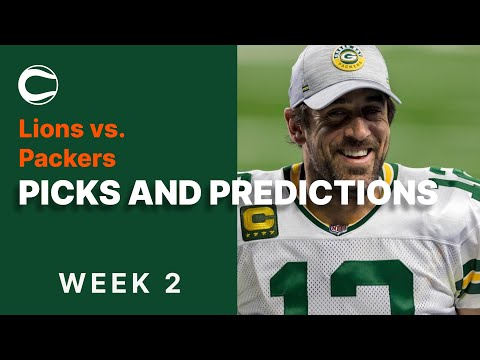 Monday Night Football action in Week 2 of the NFL season features what looks like a lopsided matchup at Lambeau Field between the Detroit Lions and Green Bay Packers.

NFL betting lines opened with this game as the second-biggest spread of the week, and the Packers now sit at 11-point home favorites as they try to bounce back from a blowout loss in their season-opener.

Here are our best free Lions vs. Packers picks and predictions for Monday Night Football on September 20, with kickoff at 8:15 p.m. ET.

This line opened with the Packers installed as 10.5-point home favorites but soon moved to -11. As of Friday afternoon, that line has stayed steady at most books although some have the Packers line as high as -11.5. The Over/Under has ticked down to 48.5 from an opening total of 49.5.

The Lions are 2-6 ATS in their last eight games following an ATS win, while the Packers are 8-1 ATS in their previous nine contests following a straight-up loss. Find more NFL betting trends for Lions vs. Packers.

The Lions were getting absolutely slaughtered at home last week, trailing the 49ers 38-10 in the third quarter, but they piled up points in garbage time and ended up covering the 8.5-point spread thanks to a pair of late touchdowns.

While getting a beatdown in Week 1 was expected for Detroit, the Packers suffered the same fate despite playing the Saints as 4-point faves on neutral ground.

Green Bay lost by 35 points, and while it might be fair to question just how motivated star quarterback Aaron Rodgers is after a tumultuous offseason, there's plenty of reason to think that last week's embarrassment was an outlier. The Packers went just 1-10 on third downs and a pair of Rodgers interceptions within four minutes of each other in the third quarter doomed any chance of a comeback.

That said, the Packers had the best third-down conversion rate in the league last season and Rodgers threw a total of just five interceptions in 16 games. Expect Green Bay's offense to return to that level of efficiency against a Detroit defense that was dead-last in the NFL in defensive DVOA last season and doesn't look any better.

As for the Lions offense, they simply don't have the talent at the skill positions to keep up with Green Bay's attack. We're backing the Packers to take out their frustration from Week 1 by wrecking the Lions at home in primetime.

The Lions surrendered a league-worst 32.4 points per game in 2020 and the early returns do not look promising for this group moving forward. Last year's top draft pick, Jeff Okudah, was lost for the year with an Achilles injury, and even with him at corner, the Lions have been burned deep, surrendering a whopping 18.5 yards per reception last week. Their run defense wasn't much better, giving up 131 yards on the ground and constantly getting bullied by San Fran's blockers.

They won't be able to contain a Packers offense that looked out of sync last week but led the league with 31.5 ppg in 2019 and still has playmakers like Rodgers, Davante Adams, Aaron Jones, and Robert Tonyan.

That said, Green Bay has question marks of its own on defense and Jared Goff did throw for 338 yards in his Detroit debut in Week 1. While much of that yardage was racked up by his tight end and runnings backs during the fourth quarter, it stands to reason that if the Lions fall behind early again, the game script will likely lead to them trying to push the ball up the field and up the tempo.

With the Lions going 7-2 to the Over in their last seven games as an underdog and the Packers going 4-1 O/U in their previous five contests as a fave, back this game to go Over the total.

While the talent disparity between these teams makes it seem like an easy call to back the Pack, double-digit favorites are always tough to trust against a division rival — especially with Lions 7-1 ATS in the last eight meetings.

As we saw last week when the Lions scored 16 points in the final two minutes, backdoor covers are always a possibility when a team gets up big early and takes their foot off the pedal. One way to get around that is betting the first-half spread. The Lions trailed by 21 points at half last week and now they'll be facing an angry Packers squad that should be extremely motivated to come out fast at home.

Lions vs Packers Monday Night Football Picks and Predictions: Back the Pack for MNF
Provided by

Chiefs vs Titans Week 7 Picks and Predictions: Can Tennessee Do It Again at Home?
Alistair Corp | Oct 22, 2021