Cincinnati stunned NFL bettors with a Week 1 victory and now must visit Soldier Field to keep the momentum going. But laying in wait is a Chicago team that is better than its Sunday result suggests, as our Bengals vs. Bears picks explain.

A non-conference clash in the Windy City sends the Cincinnati Bengals on the road to face the Chicago Bears in Week 2.

The NFL betting odds had Chicago laying a field goal after a 34-14 loss to the Rams in Week 1, but with the Bengals off an upset OT win over Minnesota at home, the spread has dipped under the key number at some sportsbooks with early action on the underdog.

Check out our free NFL picks and predictions for Bengals at Bears on September 19.

As mentioned above, a strong showing from Cincy and a rough outing for Chicago has shifted this spread since Sunday night. Books opened the Bears -3 and the juice quickly shifted with play on the underdog.

The Under is 14-5 in Bears’ last 19 home games. Find more NFL betting trends for Bengals vs. Bears.

The Bears may have been beaten by 20 points on Sunday Night Football, but it didn’t really feel that way. In fact, Chicago would have been leading at the halftime break if not for a bad interception in the end zone from QB Andy Dalton. The Bears hung with my top pick in the NFC for the bulk of the game, making those laying the -7.5 or more on L.A. a little sweaty.

There were some bright spots in that loss: Dalton wasn’t great, but he wasn’t bad either, and we got to see just how dangerous rookie Justin Fields can be with the football. Mix in a solid rushing effort from RB David Montgomery, and Chi-Town bettors shouldn’t feel too bad about Da Bears.

Cincinnati is a big drop in gears when compared to the Rams, especially with this young Bengals team ripe for a letdown spot on the road after such a dramatic finish to Week 1. That win also allowed this franchise to unclench its butt cheeks a bit, with QB Joe Burrow looking strong after last year’s season-ending knee injury.

To say the Bengals were lucky to escape Week 1 with the victory would downplay Burrow’s fantastic effort, but Cincinnati did dance with the devil a few times during that game and escaped unburned. It sat No. 4 in the “Luck Rankings” in the opening week of 2021.

First off, the Bengals blew a 21-7 third-quarter lead and allowed 351 yards passing to Kirk Cousins & Co. Second, head coach Zac Taylor rolled the dice on fourth down three times, converting two of those plays including a key gamble in overtime. And third, Taylor wouldn’t have had to go for it so often if Cincinnati didn’t finish 3 for 14 on third downs for the day.

I expect the Chicago defense to turn up the intensity in their second go-around in new DC Sean Desai’s system, especially if NT Eddie Goldman can return after missing Week 1. The L.A. film study should be very useful as well, since Taylor is a former assistant under Rams head coach Sean McVay and the Bears defense could see some of the same offensive wrinkles run by the Bengals on Sunday.

Sprinkle in an uptick in touches from Fields – honestly, this is the best spot to let him loose in the first two months of the schedule – and I like this short home favorite below a touchdown in what could be an ugly game.

Dalton and the offense played with a busy tempo on Sunday night and held on to the football for 35:14, calling 69 total plays, which was the 10th-most in Week 1. However, the snaps that did make gains picked up only small chunks of yardage, for an average of just 4.7 yards per play.

Dalton wasn’t dangerous under center, averaging 7.4 yards per completion and connecting for just one pass over 10 yards. Some of that falls on the Rams’ dominating defense and pass rush, but Cincinnati showed some teeth on defense in Week 1 as well, posting 17 QB pressures against the Vikings. The Bengals have the largest set of intel on Dalton, which could make for a busy day for Montgomery on the ground.

The Bengals put forth a two-way attack that accounted for 366 total yards against a Minnesota defense projected to rank among the NFL’s elite in 2021. But the offensive line did allow five sacks on Burrow – not what you want with the guy playing on a wonky knee.

Desai is trying to capture the chaos of the 2018 Bears defense and will throw a lot at Burrow in hopes of bailing out a soft secondary. Expect plenty of Joe Mixon carries in this one after he bullied his way for 127 yards on 29 runs in Week 1. That should keep the clock ticking for Under bettors.

Bears bettors are no strangers to boring first quarters.

Chicago has been a notorious slow starter for a while now, posting a goose egg in the opening frame in Week 1 and averaging only 4.2 first-quarter points in 2020 – an uptick from its 2019 output of 2.3 points in the first 15 minutes.

Nagy’s offense has an identity crisis usually reserved for Christopher Nolan films, and until they feel confident in Fields as the QB1, they’ll be stuck in neutral.

The Bengals stop unit kept Minnesota off the scoreboard in the opening quarter in Week 1 and will follow the early blueprint laid out by L.A. in containing the Chicago playbook. 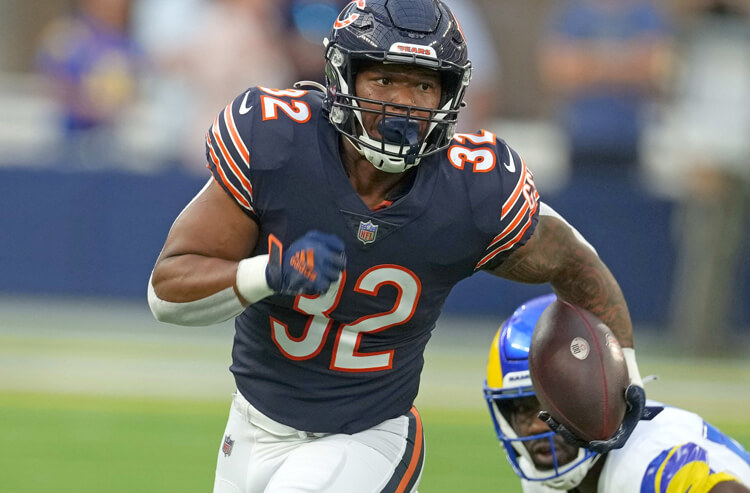