Justin Herbert crushed Washington's elite D in Week 1 and now gets to face Dallas' far-less-scary secondary. Get set for fireworks in this one as we break down our Cowboys vs Chargers picks for Week 2.

The Dallas Cowboys hit the road for the second straight game, visiting SoFi Stadium and the Los Angeles Chargers in Week 2.

The Chargers took down another NFC East opponent in Week 1, beating Washington 20-16 as 2.5-point road underdogs. The NFL betting odds have the Bolts installed as 3-point home favorites, facing a Cowboys team coming off a mini bye after losing 31-29 to Tampa Bay last Thursday.

Here are our free NFL picks and predictions for Cowboys at Chargers on September 19.

The lookahead line in the spring had Los Angeles as a 1-point favorite, however, the official Week 2 opening spread installed the host team as 2.5-point chalk and that has since climbed to -3 with some spots still under the field goal line. The total is the biggest mover, hitting the board as low as 50.5 points and skyrocketing to 55 as of Tuesday morning.

The Cowboys are 10-6 Over/Under in games with totals of 50 or more points over the past five seasons.  Find more NFL betting trends for Cowboys vs. Chargers.

Justin Herbert spit in the face of the sophomore slump last Sunday. The 2020 Offensive Rookie of the Year threw for 337 yards against a Washington team that ranked No. 2 in Pass Defensive DVOA last season and limited opposing passers to just 193 yards per game.

Herbert’s Week 1 effort came in his first game-speed run-through of new OC Joe Lombardi’s offense on the road against an elite stop unit. And his receivers dropped seven balls. Imagine what he could do to the Cowboys’ soft secondary at home this Sunday.

The Dallas defense was shredded by Tom Brady and the Buccaneers' passing attack last Thursday, allowing 379 yards on 64 percent completions and four passing touchdowns. Yeah, the Cowboys came away with two interceptions off Brady, but one was a Hail Mary at the end of the half and the other was a bobble on a screen pass that happened to land in Trevon Diggs’ pocket.

The Bolts have a big bruising receiving corps with Herbert’s four main targets standing 6-foot-1, 6-foot-2, 6-foot-4 and 6-foot-5. That group registered 20 passing first downs against Washington and also helped L.A. go 14 for 19 on third-down conversions. Outside of Diggs, the Dallas secondary has no starter taller than 6-foot and gave up 22 passing first downs to Tampa Bay.

The Cowboys’ best defense against this Bolts offense is on the other side of the ball, dishing out a heavy dose of RB Ezekiel Elliot on the ground in order to chew up clock and keep Herbert iced on the sideline. But with Dallas unable to get stops – outside of some random turnovers, maybe – the Cowboys will find themselves in a shootout, much like Thursday.

This game could come down to which team has the ball last, and that’s a situation that hasn’t panned out well for the Cowboys in recent years. The Chargers are trying to flip the culture of collapsing in close games under this new coaching staff and will take another step forward in Week 2.

Most books are dealing L.A. -3 but there are still some -2.5 lines out there with heavy vig. Shop and get the Bolts under the field goal.

I’ve hyped the Chargers’ passing game a lot, but Dallas has an even more potent air attack in 2021. Dak Prescott was masterful in his return from a gruesome ankle injury, carving up the Buccaneers’ Super Bowl defense for 403 yards and three touchdowns last Thursday.

Prescott hit eight different receivers but leaned heavily on Amari Cooper and CeeDee Lamb, who combined for 20 catches on 31 targets for 243 total yards and all three TDs. This is a much tougher test for Los Angeles than the WFT offense, which lost QB1 Ryan Fitzpatrick early into Week 1. Even with Michael Gallup laid up for a few weeks and the offensive line shuffling bodies, Dallas can put up points on Los Angeles.

The 20 points Los Angeles scored in Washington is a bit misleading when looking at the gains the offense was able to grab. It was running out of steam in the red zone that plagued them most, coming away with two touchdowns in six trips inside the WFT 20-yard line.

With this being the second game in this new offense for all starters and playing at home, away from the crowd noise (yeah!) surrounding you in the red zone on the road, this part of the playbook will execute better in Week 2. It also doesn’t hurt that the Cowboys gave up three TDs in five red-zone tries to the Bucs last week and allowed foes to find paydirt on 62 percent of their shots inside the 20-yard line last year.

The best of this number has passed us by (hopefully you read my Bet Now/Bet Later lines earlier in the week), but I’m still not shy about taking the Over now that the total is at 55 points.

Los Angeles may not have a Gronk, but they do have a Cook in the kitchen, with Jared Cook posting a solid Week 1 in Washington. The Bolts TE was targeted eight times for five snags, totaling 56 yards.

Cook had seven touchdowns as a member of the Saints in 2020 and 16 total scores in two years with New Orleans. Los Angeles’ red zone issue will resolve and the 6-foot-5 Cook will be a big option close to the goal line. 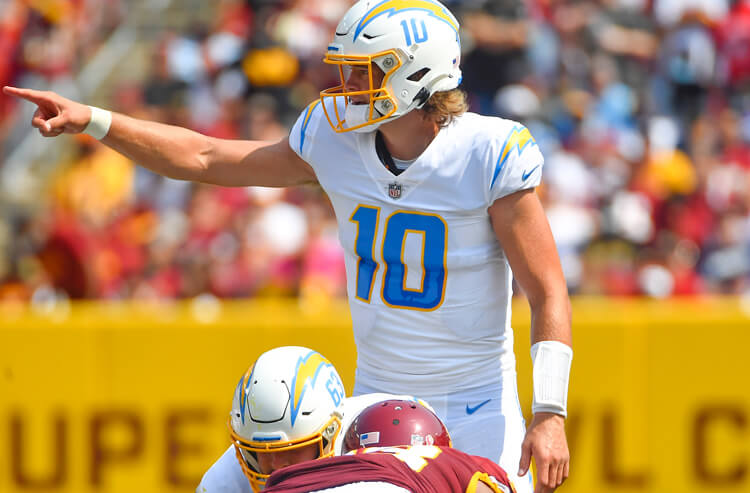