Books are expecting fireworks when Dallas visits Kansas City, but there are trends and matchup dynamics that suggest the total might be a tad high. Find out why as we break down our Cowboys vs. Chiefs picks for Week 11.

A massive non-conference clash headlines NFL betting in Week 10 when the Dallas Cowboys come to Arrowhead Stadium to face the Kansas City Chiefs.

The Chiefs are slim favorites at home, fresh from a victory in Las Vegas Sunday night – seemingly snapping out of a three-game offensive funk. Dallas, on the other hand, bounced back from a bad loss in Week 9 with a 43-point eruption in a blowout of Atlanta last Sunday. That surplus of firepower has this total among the highest of 2021.

Here are our NFL free picks and predictions for Cowboys at Chiefs on November 21.

Kansas City opened as a 2.5-point home favorite after its win over the Raiders on Sunday Night Football in Week 9. That spread was bet down as low as Chiefs -1.5 on Monday before action came back on the home side and now has this spread sitting KC -2.5 (-120), with a possible move to a field goal if more money shows on Kansas City. The total opened as low as 53.5 points and has been up as high as 56 with a flood of early action on the Over.

Cowboys vs Chiefs picks and predictions

Do the Chiefs really have their groove back or was that success on Sunday night more the product of a familiar foe? We’ll find out in Week 11, but when you’ve been the best offense in the NFL the past four years, you get the benefit of the doubt.

The bigger question is can Dallas duplicate its offensive efforts on the road? And not just any old away game: inside Arrowhead. The Cowboys have thrived in a home-friendly slate, playing outside of Jerry’s World only twice in the past seven games.

There’s a significant downtick in production when Dallas hits the highway, watching its points per play slide from +0.545 (second-highest home rate) as a host to +0.362 as a visitor. What’s more, the points per play margin sinks from +0.217 at home to -0.030 on the road.

Kansas City isn’t a shut-it-down defense but has greatly improved over the past three weeks. The Chiefs have allowed a total of just 38 points in that span, and while the level of competition may not have been high (Giants, Rodgers-less Packers, Raiders), the KC stop unit boasts an EPA per play of -0.053 in that stretch - a vast improvement from the +0.181 hung in the first seven weeks of 2021.

As for the Chiefs offense, Patrick Mahomes broke out of his funk in Week 10 and then some, passing for more than 400 yards and five touchdowns in the one-sided win over Las Vegas. It was his best showing since Week 4 and his biggest yardage day since Week 11 of last year.

Mahomes takes aim at a Dallas defense that looked great against Atlanta (111 passing yards allowed and only three points) but the Cowboys have hidden a soft secondary behind those thrilling takeaways and have allowed the third-most yards per play on the road in the NFL (6.1).

This total is skyrocketing after opening as low as 53.5 points, and is now as big as 56 points at some books.

While there’s ample offensive weaponry on the field, neither team would welcome a shootout – especially Kansas City, which is still tightening the bolts on its stop unit. And speaking of such, the difference-maker for the Chiefs defense the past few games is a healthy front line getting pressure on opposing passers.

Kansas City has six sacks and 17 QB hits over the last three outings and has been able to put the heat on rival quarterbacks, primarily with a four-man rush, headlined by Chris Jones, Frank Clark and Derrick Nnadi. That chaos up front has dialed up the danger for this Chiefs defense, which has three interceptions and six forced fumbles (two recovered) since Week 8.

Cowboys QB Dak Prescott hasn’t been flustered much, feeling pressure on just 16.2 percent of snaps and suffering only 11 sacks this season. Those clean jerseys are a product of a quick-hitting attack, which sees Dak holding the football for only 2.1 seconds of pocket time and an average of 7.8 intended air yards per target. But there have been some errant throws and he’s been picked off three times in the last four games.

The key matchup on Sunday will be Mahomes’ turnover-prone play versus the ball-hawking Dallas defense. The Cowboys continue to cook up those game-changers, sitting fourth in takeaways (17) with 14 of those coming via interceptions. Mahomes has 10 INTs on the year, but only two over his last four and none in his previous two starts.

A bad mistake from the quarterbacks could be damning in such a close contest, so both passers could be passive and not press for tight completions. On top of that, the running games will also get a workout as both sides attempt to play keep-away from each other. The Cowboys have a potent one-two punch in Ezekiel Elliott and Tony Pollard and Kansas City could have RB Clyde Edwards-Helaire back for the first time since Week 5.

If Mahomes picks up where he left off and Kansas City’s stop unit can slow down that Dallas attack, the Cowboys could find themselves in another tight road outing. They’re 3-1 SU and 4-0 ATS away from home this season but have either been tied (at L.A.) or trailed in the fourth quarter in each of those road stops and needed last-second points to escape with those three victories.

Should this one come down to the wire again, we’re giving the nod to Mahomes and the Arrowhead faithful. 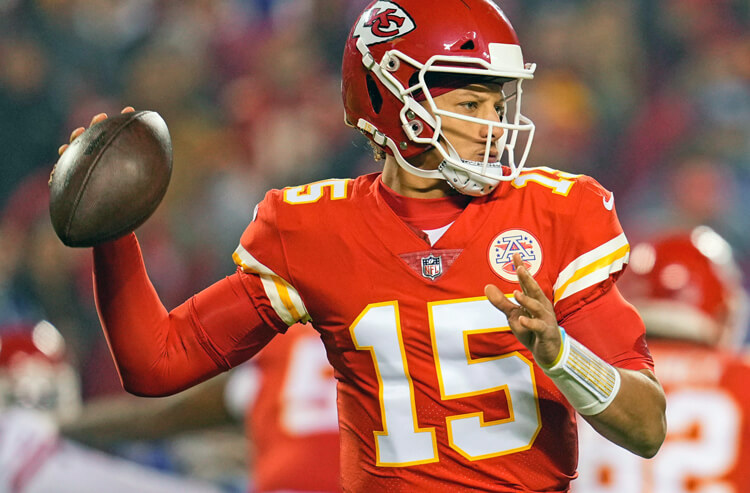