Coming off a bye week and two straight losses, the Bengals look to refocus in Sin City as a 1-point favorite. Can they take advantage of a struggling Raiders squad and get back on track? Find out in our NFL betting picks for Bengals vs. Raiders.

The Cincinnati Bengals are coming out of the bye and looking to erase a pair of ugly losses to the Jets and Browns as they travel to the Death Star to take on the Las Vegas Raiders who showed plenty of flaws in their Sunday night loss to the Chiefs.

Can the Bengals regain their Week 7 form and stay competitive in the AFC North? Can the Raiders put up some points and end their own two-game losing skid? Find out in our picks and predictions for the Bengals vs. Raiders Week 11 matchup.

This was a pick ‘em on the look-ahead and hasn’t changed a whole lot following Week 10’s results. Cincy now sits as a slight 1-point favorite which marks the third straight game Las Vegas has been a home underdog. The total has jumped from 49 to 50 which isn’t terribly significant as 47 and 51 are the key numbers in totals.

The Bengals are 4-0 ATS in their last four meetings. Find more NFL betting trends for Bengals vs. Raiders.

Bengals vs Raiders picks and predictions

The loss to the Jets was tough. Cincinnati had just finally taken down the Ravens the week before and had to face unknown QB, Mike White. Michael Carter also ate them up for over 170 total yards but a 34-31 road loss was on the horizon after a solid stretch of 4-1 SU in their five games before the Jets. In Week 9, they lost the turnover battle 3-0 to the Browns, which included a pick-six. Cleveland also scored on two plays of 60-plus yards and finished with just 360 yards of offense but managed 41 points. The boxscore tells a closer game than the 41-16 outcome.

So can Joe Burrow and the Cincy offense get going against the Raiders? Las Vegas got gouged hard by a Chiefs offense that came into the Week 10 meeting struggling. The Chiefs finished with over 500 yards of offense and put some long drives together including eight-, nine-, 10- and 11-play drives in the first half alone. The Bengals' offense averages 6.0 yards per play which ranks fourth in the league and can mimic the KC game plan as Joe Mixon is a threat on the ground and in the passing game and can do as much damage versus the Raiders as Darrel Williams did in Week 10.

The Raiders came into their Week 10 matchup with the Chiefs as one of the best defenses at creating pressure on early downs and Las Vegas finished with zero sacks on Mahomes. Cincinnati will likely come out and run, getting their backs involved in the passing game and keeping things short to offset the Maxx Crosby pass rush. KC drew up the blueprints and Zac Taylor just needs to copy it and has the weapons to do it.

Without Henry Ruggs, this Las Vegas offense consists of one good tight end and a mid-tier running back in Josh Jacobs who gained 2.3 yards per carry vs. the Chiefs. The lack of a deep threat congested Darren Waller's routes which were usually cleared out by Ruggs. D-Jax is not the answer and trusting Zay Jones to stretch the field is likely a losing strategy as well.

Taylor gets an extra week to out-coach Rich Bisaccia, whose offense has managed just 30 total points over the last two weeks. The K.C. -2.5 line last week was short so the argument in line comparables seems invalid to us.

Combined, both teams are an even 10-10 O/U on the year but both clubs have been profitable to the Over since Week 7. However, trusting this Raiders’ offense to push their team total of 23.5 points after its showings in Weeks 9 and 10 is something we’re not quite sure we want to do.

Over their last two games, the Raiders have struggled to put up points. Versus the Giants, Vegas moved the ball well but went 1 for 6 in the red zone and walked away with 16 points despite putting up over 400 yards of offense which averages out to roughly 27 expected points. They then followed that up with another dud versus the Chiefs.

Carr struggled mightily in the first half against the Chiefs as the offense punted on four of their five possessions while their one scoring possession was aided by a pass interference call. This is a team that looks lost in the running game — 28th in rush yards per game — and lost their fullback and third-down passing back in Jalen Richard — both questionable. Waller, Renfroe, Jones and D-Jax lack big-play ability.

We know Cincy can move the ball as it's scoring 29 points per game over its last three and have a ton of weapons to work with but this equals the biggest total the Bengals have seen all year and if Vegas does create pressure, Joe Burrow could be going backward. Cincinnati sits 23rd in the league in sacks allowed per game at 2.8 and has allowed nine QB takedowns over its last three contests. The Raiders blitz at the lowest rate which means less single coverage and therefore fewer big plays for the Bengals.

Speaking of big plays, both defenses sit in the middle of the league in explosive run plays allowed but both offenses rank in the bottom-five in runs of 10-plus yards or more. Against the pass, the Raiders are top-eight in explosive pass plays allowed which should help negate the strength of the Cincinnati offense.

This is a tough number but after getting a good look at the Raiders’ offense last week, it just lacks personnel right now to pull off big gains.

Coming off the bye and getting a good look at how the Chiefs dismantled the Raiders in Vegas is a great spot for Taylor and the Bengals. If Cincinnati can avoid the Las Vegas pass rush, and take advantage of Las Vegas’ generosity to opposing RBs (149 total yards allowed/game and 1.1 TDs), the deep pass for Burrow could open up.

The Bengals sit fifth in average explosive pass play percentage and if Vegas gives up the underneath pass as they did with KC, Ja’Marr Chase, Tee Higgins, Tyler Boyd and Mixon are all great playmakers with the ball in their hands and can take advantage of the extra space.

Vegas can’t run the ball and could be without their fullback putting a ton of pressure on Carr and his pass catchers that are better possession receivers than they are deep threats.

Give us the Bengals to get back to their winning ways and keep pace with the competitive AFC North in what is basically a pick ‘em. 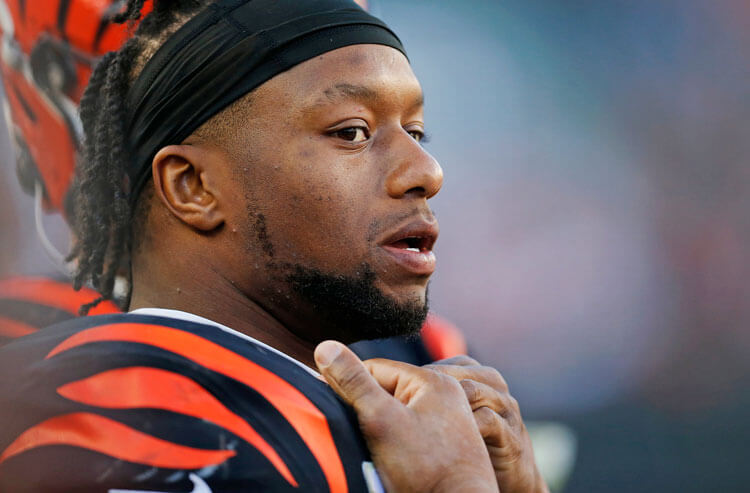 Bengals vs Raiders Week 11 Picks and Predictions: Bengals Can Follow Chiefs' Blueprint in LV
Provided by