The Washington Football Team heads to Denver in Week 8, with both teams looking to bring their losing streaks to an end. What could be a rock bottom game for whichever team loses, who has the edge? Find out in our Washington vs. Broncos picks.

Both teams are on bad runs, and on Sunday we’ll see one of them break its losing streak. The Broncos are hosts and have lost four in a row after winning its first three games of the season. Meanwhile, their guests, the Washington Football Team, are losers of three in a row.

Both sides will be hoping that breaking their losing runs could reinvigorate their season, but who will secure the win? Don’t miss our NFL picks and predictions for the Washington Football Team vs. Denver Broncos.

The Broncos started at 3.5-point favorites but that’s shortened into 3-point favorites since the line has opened. Meanwhile the points total has risen from 44 to 44.5 points. Use the live odds widget above to track any future line movements right up until kickoff and be sure to check out the full NFL odds before placing your bets.

The Broncos are 8-1 ATS in their last nine games in Week 8. Find more NFL betting trends for Washington vs. Broncos.

It’s been a disappointing season for both of these teams. After last year we expected the Washington Football Team to continue to progress. They made the playoffs last year on the back of its great defense. This year, the addition of Ryan Fitzpatrick was meant to give them some stability at quarterback. Sadly, Fitzpatrick got injured and the defense has failed to reach last year’s level. They’re now on a three-game losing streak and their only two wins have been narrow victories over the Falcons and Giants. Four of their five defeats have come by double digits.

Compare that with the Broncos who started brightly. Winning their first three games, albeit against poor teams, before losing their past four in a row. After the brilliant start, some were talking them up as a potential wild card team or even winning their division. Now they sit rock bottom with a 3-4 record, tied with the Chiefs and two wins behind the unexpected leaders, the Las Vegas Raiders.

The Broncos were always going to find it tough when the schedule got hard but an injury to Jerry Jeudy , who looked primed to breakout, was a tough one on the team. We might see Jeudy this Sunday with him questionable to return from the ankle injury which saw him land on IR.

The Football Team have given the ball up 11 times this year - seven interceptions and four fumbles. That’s simply not good enough and will give Denver opportunities to get takeaways. Denver’s defense looked promising earlier in the season but they now sit 26th in defensive DVOA. We’re yet to see Bradley Chubb and Von Miller on the field together this season but when it eventually happens their pass rush will greatly improve.

Two spots before the Broncos in defensive DVOA are the WFT, who are 28th in the league, below 0-7 strugglers Detroit. This isn’t what we expected this season but this defense just isn’t up to the level we needed. Nobody in the league gives up more passing yards than Washington, averaging 300.6 yards per game and they give up a league high 30 points per game.

If the Broncos can’t take advantage of this defense then there needs to be serious questions raised about the direction of the franchise and the future of Vic Fangio. Back the Broncos to win and cover.

The Over is 6-2 in the Broncos past eight games after scoring less than 15 points in the previous game but that shouldn’t be your sole reason for backing the Over.

As you’d have read above, I’m very confident about the Broncos winning and see Teddy Bridgewater having a great day throwing the football as the team put some serious points on the Washington Football Team. WFT have given up an average of 30 points per game, so going by averages at least, we’ll only need the WFT to score 15 points and we’d be have hit the Over here.

The Football Team should be able to put up a few touchdowns. Terry McLaurin continues to look QB proof and last week put on a real clinic against the Packers with seven receptions for 122 yards and a touchdown. He’ll be helped greatly by his team’s ground game, who should be primed for a big day. Last week the Broncos let D’Ernest Johnson put up 146 rushing yards, only marginally more than Najee Harris had against them two weeks earlier.

The Broncos and Football Team are both struggling to stop the ball and despite limited offenses we should see an easy cover of the Over here.

Nobody gives up more receiving yards per game than the Washington Football Team and with the likely return of Jerry Jeudy, they’re going to be even more stretched by this receiving corps. Jeudy managed over 900 yards last year despite some of the league’s worst quarterback play so even if he’s not 100 percent healthy, he’ll be drawing some coverage.

Alongside Jeudy will be Courtland Sutton, who has 539 yards so far this season, 10th highest in the NFL. With those two on the field, it’s going to create all sorts of mismatches that Noah Fant can exploit.

Fant has quietly been having a good season, despite only having 312 receiving yards, he’s only three receptions behind Sutton, which shows his importance to the team. He’s facing a defense that ranks 25th when it comes to giving up yardage to tight ends. They’ve allowed an average of 67.43 yards per game to the position, which should give all bettors a reason to look at Fant. Combine that with the threats presented by the Broncos wideouts and it makes sense to back Fant to go Over. 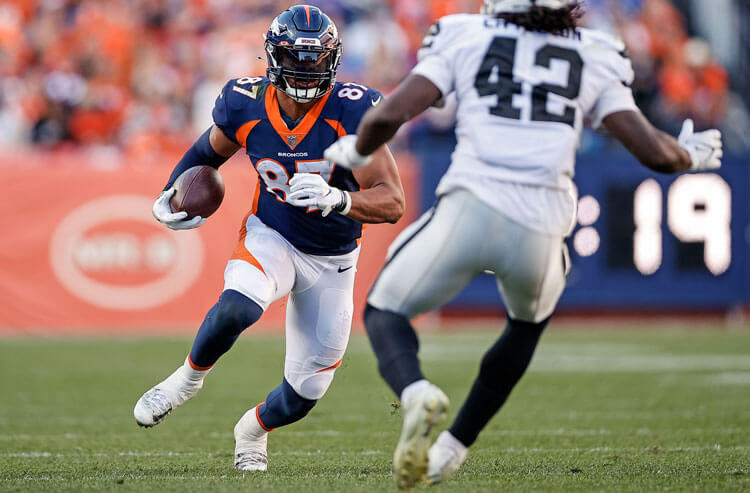 Washington vs Broncos Week 8 Picks and Predictions: Washington's Woes To Continue
Provided by