Seattle's still without its superstar QB, and has several liabilities to address as it welcomes an improving Trevor Lawrence to Lumen Field. Find out if the birds can soar over this spread with our Jaguars vs Seahawks picks.

Only one win separates these two teams, with the Seahawks and their two wins just ahead of the Jaguars’ one. That probably doesn’t give a fair indication of the differences between the two teams, given that the Seahawks are in the fiercely competitive NFC West.

Can Trevor Lawrence continue to showcase the skills that got him picked at first overall in this year’s NFL draft? Consult our NFL picks and predictions for the Jacksonville Jaguars vs. Seattle Seahawks on Sunday, October 31 to find out.

We’ve seen very little movement in the lines since opening. The Seahawks have remained three-point favorites. The total points line has grown marginally from 43 to 43.5 as of publishing.

The Under is 5-1 in Jaguars’ last six games as an underdog. Find more NFL betting trends for Jaguars vs. Seahawks.

At first glance, there really shouldn’t be a doubt over the winner of this one. With Russell Wilson injured, it’s a very different story though, especially with the Seahawks coming into this after a short week because of an appearance on MNF. That’s in stark contrast to the Jaguars, who have had their bye week to return to Jacksonville from London, refocus and recalibrate ahead of this game.

The Seahawks sit 2-5 at rock-bottom of the NFC West while the Jaguars sit on a poor 1-5 record. This game doesn’t leap out as one for neutral fans, especially if they watched Monday Night Football, where the Seahawks only managed to put up 219 total offensive yards in a low-scoring loss to the Saints. When Russell Wilson isn’t with this Seahawks team, there’s a much smaller distance between these franchises than you’d imagine.

The Jaguars won their last game 23-20 with a kick at the death to dispatch the Miami Dolphins. It wasn’t a great performance by the Jaguars, with the defense non-existent and the offense blighted by drops and consistent penalties. If they’d been able to cut down on penalties then they’d have won a lot more comfortably, but that shouldn’t take away from the performance of Trevor Lawrence. The first overall pick from this year’s NFL Draft has had a mixed season so far. He’s had some shocking moments, some of which were perhaps down to the offensive line in front of him, and then some great moments which showcase why he’ll be a success at the NFL level.

If there’s a chance for the Jaguars to win back-to-back games this season, then this will be it. The Seahawks have looked awful since Russell Wilson went down and Geno Smith isn’t an NFL-caliber QB. Defensively, the Jaguars are far worse than the Seahawks, ranking at the bottom of the league in defensive DVOA compared to 21st for the Seahawks, but Lawrence will be able to cause some serious issues for their secondary.

Defensively there aren’t any teams as bad as the Jaguars, but luckily for them, they’ll be facing Geno Smith. Smith only managed to throw for 167 yards and one touchdown against the Saints, albeit versus a good defense. He only managed 209 yards the game before against the Steelers and 131 yards the week before after coming in for Russell Wilson.

Alex Collins has led the Seahawks’ ground game since Chris Carson’s injury, but it’s worth noting that he’s struggled at times in recent weeks, including against the Saints in Week 7. The Jaguars have the 17th best record in the league against the run so we’ll see the Seahawks rely on passing, which should give the Jaguars defense a chance to pick Smith off.

Will the Jaguars be able to pull off the win? I’m not certain, but the team is finally tracking in an upward direction and I think we could see a strong performance from Lawrence against a defense that’s only 29th in terms of passing yards per game, giving up an average of 280.6 yards. Let’s take the Jaguars +3 here.

Everything is pointing us towards the Under here, despite a low total of just 43.5 points. We’ve already mentioned how stagnant the Seahawks offense has been with Geno Smith under center, and the Jaguars haven’t really been known for great offensive football under Urban Meyer so far.

Trends also point us towards the Under. The Under is 13-3 in the Seahawks’ past 16 games overall, 9-2 in their last 11 games on fieldturf, and 7-0 in the last seven games following a loss. Things aren’t much different for the Jaguars, where the Under is 5-1 in their past six games as an underdog.

Nobody is expecting this game to be a classic so let’s stick with what our eyes and the trends tell us, grab the Under.

We’ve already spoken about the Seahawks secondary and the opportunities that it could give for Trevor Lawrence. He’s thrown for seven touchdowns and 1,465 yards so far this season, with a disappointing 59.7 percent pass completion on average. Despite that, he’s got better and better nearly every single week.

Over the past three weeks, we’ve seen Lawrence’s QB rating stay above 92.1, whereas in the opening three games of the season he didn’t exceed 70.1, even hitting 37.2 in Week Two against the Broncos. Last week saw only his second game of 300+ yards, and everything he is doing, from his footwork through to his reads, looks more polished each week.

With an ever-improving Lawrence facing a secondary that’s 29th in passing yards allowed per game, despite having the highest-paid safety in the game, we’ll be backing the Over on Lawrence’s passing yards. 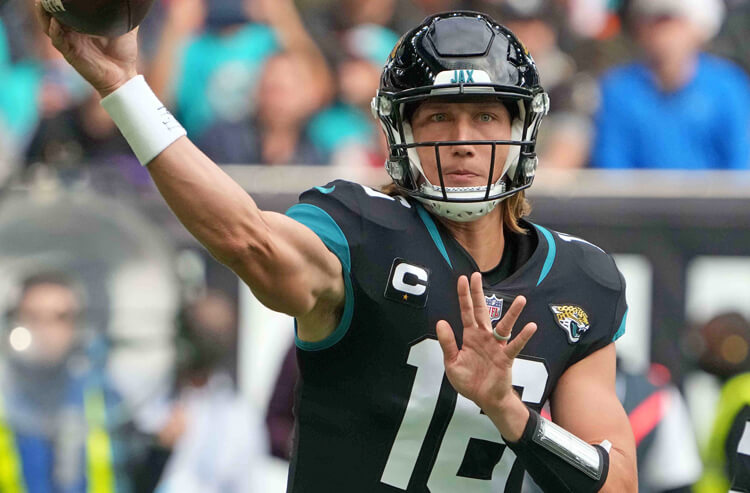