With Dak Prescott's availability still up in the air, the Vikings come into Sunday Night Football with a slight edge in their matchup against the Cowboys, who are 6-0 ATS on the season. See how it plays out in our NFL betting picks for Cowboys vs. Vikings. 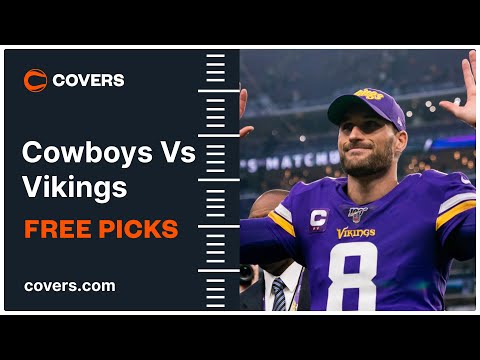 NFL betting fans get to go trick-or-treating on Halloween as the Dallas Cowboys visit the Minnesota Vikings on Sunday Night Football in Week 8.

Dallas opened as the favorite and drew early action but the status of Cowboys quarterback Dak Prescott and his ailing calf has caused concern and the NFL odds took a huge swing on Thursday evening — shifting from Minnesota +2.5 to -2.5.

Both teams are coming off bye weeks, with Dallas hoping that hiatus doesn’t stunt a five-game winning streak and 3-3 Minnesota searching for consistency.

Here are our best free NFL picks and predictions for Cowboys vs. Vikings on Sunday, October 31.

Dallas opened as low as -1 last Sunday night and didn’t take long to climb as high as -2.5, with the bulk of early action on the red-hot Cowboys. However, injury updates on Prescott’s calf strain came out Thursday afternoon, putting his status in question, and forcing a line move over the fence to Vikings -2.5 as of Friday morning.

Under head coach Mike Zimmer, the Vikings are 36-24-1 ATS at home (since 2014), covering 59.8 percent of the time. Find more NFL betting trends for Cowboys vs. Vikings.

Prescott’s injury seemed a little more serious than the team let on heading into this week. He suffered the calf strain at the end of the thrilling overtime finish against the Patriots in Week 6 and had the off week to heal up. Yet, come Monday the injury was still being mentioned and Dak was limited in practice and prep.

If he does suit up on Sunday night, Prescott is going to need full mobility against a Vikings defense that thrives at bringing pressure. Minnesota sits tied atop the NFL with 21 sacks and generates pressure on 32.1 percent of opponents' dropbacks – most in the league.

This Minnesota stop unit entered 2021 with lofty expectations and stumbled a bit to start the year, but has corrected course in recent outings. The Vikings, who sit No. 6 in Defensive DVOA, have given up only 4.5 yards per play in their past three contests and own an EPA per play of -0.152 (third-lowest in that span).

Offensively, the Vikings have been spotty. On paper, this attack should rank among the best in the NFL, but injuries and inconsistencies have them sitting 12th in Offensive DVOA. Now, with the bye week behind it, Minnesota is expecting to have RB Dalvin Cook at his healthiest all month, complementing a passing attack putting up the sixth-most passing yards per outing, and more importantly, not committing many mistakes.

Kirk Cousins owns a completion percentage of 69.58 percent and a passer rating of 105.6 with just two interceptions on the season. That’s a key stat versus this ball-hawking Dallas secondary, which has helped mask a soft stop unit by making those game-changing plays. If the Cowboys don’t create those takeaways, they get exposed.

This total hit the board at 53 points last Sunday and marched up as high as 55 at some books, before slimming back to 53 upon news of Prescott’s questionable status.

Both teams will be aiming to establish the running game on Sunday night. The Vikings, having Cook back to full speed, will want to chew up gains and hog the football, keeping it out of the hands of the potent Cowboys offense. Minnesota picks up 4.5 yards per carry on the season and sits 12th in possession with an average TOP of 31:01.

The Cowboys will look to Ezekiel Elliot and Tony Pollard to push the offense forward if Prescott is hobbled or sidelined, in an attempt to lighten the load and keep pressure off his ailing leg. Dallas is dominant on the ground, owning the third-most yards per carry (5.1) and facing a Vikes defense that has budged for bigger gains on the ground, ranked 24th in Run Defense DVOA.

That said, Mike Zimmer has stepped up to the challenge of slowing down top-tier offenses during his coaching career. According to NFL stats, Zimmer-led stop units – as a coordinator or head coach – are 6-2 SU versus No.1 rated offenses, with Zimmer’s defense holding each of those eight attacks below its season scoring average.

Elliott gets the lion’s share of the carries for the Cowboys, but Tony Pollard has emerged as a capable weapon as well, entering Week 8 with 366 rushing yards and 115 receiving yards on 15 catches. Yet, with Dallas scoring 4.2 touchdowns per game, Pollard is responsible for only one of those strikes.

Minnesota has given up gains to running backs along with five rushing touchdowns. The Vikings will test Prescott’s poise in the pocket on one leg, bringing plenty of pressure, and Pollard is a release valve that can pick up gains after the catch as well as break off longer runs, picking up six yards per carry.

His TD prop is anywhere between+160 and +260 (at DraftKings), so go knocking on doors at your local sportsbooks for the best payout on Pollard finding paydirt on Halloween night. 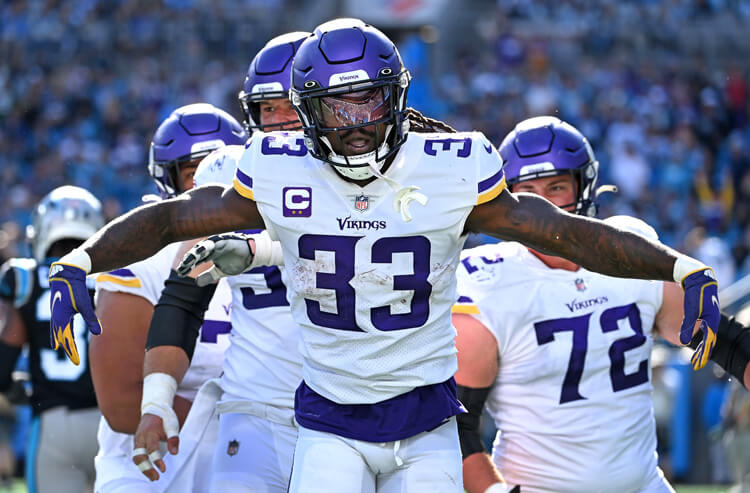