Patriots vs Chargers Week 8 Picks and Predictions: Chargers Out For Revenge

L.A. has a week of rest under its belt, and plenty of motivation to bring it when the Pats visit in Week 8. Find out if Mac Jones can pass his first true road test with our Patriots vs Chargers picks.

The Los Angeles Chargers have had this Week 8 matchup with the New England Patriots circled on the calendar for a while, after absorbing a 45-0 blasting at the hands of the Pats last December.

The NFL betting odds have the revengeful Bolts set as 5.5-point home chalk, coming off a bye week that followed a one-sided road loss at Baltimore. New England, on the other hand, has won two of its last three, including a 54-13 trouncing of the Jets last Sunday.

Check out our NFL free picks and predictions for Patriots at Chargers on October 31.

The Chargers opened as 5.5-point home favorites and have bounced between that spread and -6, with buyback on New England whenever the line hits that key number. The total for this Week 8 clash opened as low as 47.5 points and has climbed as high as 49 with early play on the Over.

CT ONLY: Bet on the Patriots ATS at FanDuel. Users who bet the spread gets odds equal to the closing line. For every 250 Connecticut customers that bet on New England ATS, the spread will increase by one (1) point in NE's favor — so if you bet on NE +20, and the line closes NE +100, you'll get your bet priced at +100. Claim Now

The Patriots are 2-5 ATS in their last seven road games. Find more NFL betting trends for Patriots vs. Chargers.

I’m not a big believer in revenge spots, but there’s no way this Chargers staff isn’t hanging last year’s final score all over the locker room in preparation for this rematch with the Patriots. Avenging that one-sided defeat and Justin Herbert atoning for one of his worst games as a rookie is a cherry on top of the motivational sundae for L.A.

The last we saw of the Chargers, they were bursting bettors’ bubbles with a dud of a game in Baltimore back in Week 6. Los Angeles had a ton of momentum heading into that game, with three straight wins, but a tough travel spot and a soft rushing defense did the Bolts in.

Head coach Brandon Staley spent a good chunk of the bye week trying to solve those issues up front, and while that weakness to the run won’t go away, added game planning and the expected return of DT Justin Jones will help.

Perhaps the best way to defend the run is to force the Patriots to pass, and that means getting out to a fast start on offense and making New England play catch-up. Before bombing in Baltimore, the Chargers offense had posted scores of 30, 28, and 47 during that three-game streak and enters Week 8 ranked eighth in EPA per play (+0.090).

The Bolts are a much stiffer test than most of the offenses the Patriots have faced this season, with New England taking on the Jets (twice), Texans, and Dolphins. And while they did slow down Tom Brady and the Bucs (at home in the rain), they got gashed versus the Saints and Cowboys.

The Chargers have been making the plays that matter, converting 45 percent of third-down attempts and scoring touchdowns on almost 82 percent of their red-zone visits over the past three weeks, getting past those growing pains inside the 20-yard line that plagued them to start the schedule.

Los Angeles has also limited its turnovers – with just six on the season – which is something that hurt L.A. in last year’s loss to New England, with Herbert throwing two interceptions and falling victim to Bill Belichick’s curse of rookie QBs.

Speaking of rookie quarterbacks, Patriots first-year passer Mac Jones has had a rapid maturation the past two games, but this cross-country trip to L.A. will be his first true road test of his pro career, after cake-walk stops at New York and Houston.

The Bolts defense gives up just 6.5 yards per pass attempt and sits 10th in EPA per dropback (+0.043), with a pressure rating of 27.8 percent (sixth-highest). In his two matchups with comparable stop units (Tampa and NOLA), Jones has thrown three INTs and been sacked six times.

Patriots offensive coordinator Josh McDaniels will attack the Chargers front with a running game that’s picking up speed over the past few games.

On the season, the Patriots ranked near the bottom of the league in rushing yards but have upped that production to 131.3 average yards on the ground the last three games, with RB Damien Harris rumbling for 207 yards in his last two efforts.

While I do expect a better effort up front from the Bolts off the bye week, New England will still do damage on the ground, and that should set up Jones for success in the passing game. The Patriots aren’t going to come close to the 54 points they hung on the Jets last Sunday, but they will score enough points to get this final score Over the number.

Los Angeles boasts one of the best offensive lines in the business and has allowed Hebert to feel the heat on just 21 percent of his dropbacks, conceding 11 sacks on the year. That unit comes in handy against a Pats pass rush that is finding its form, behind the disruptive long-sleeved play of Matt Judon.

Giving Herbert time in the pocket will allow him to pick apart this thinning Patriots secondary, which lost CB Jonathan Jones for the season and could also be without Devin McCourty, who left Week 7 with an ab injury. Fellow corner Shaun Wade is also questionable for Sunday.

Keenan Allen is a tough matchup for any team, but with New England losing slot cornerback Jonathan Jones, it opens the Pats up for a pounding from the 6-foot-2 receiver.

Allen is one of the top slot threats in the NFL and has been for a long time, reeling in 39 of 58 targets for 419 total yards on the year. He averages 6.5 receptions per game in 2021 – which is actually a tick higher than his career average.

New England has some solid safeties who can help with anything over the top, but Allen will be busy picking apart the Pats underneath on Sunday. 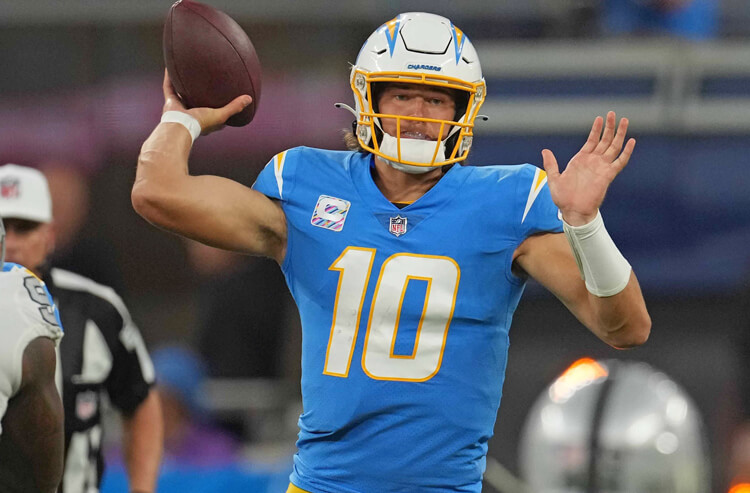 Patriots vs Chargers Week 8 Picks and Predictions: Chargers Out For Revenge
Provided by