After a winless November, Matthew Stafford and the Rams have won three straight and are vying for playoff position atop the NFC. Find out if they can make it four in a row in our Week 16 NFL betting picks for Rams vs. Vikings.

The Los Angeles Rams travel to Minnesota to face the Vikings on Sunday with both teams still yet to confirm their spots in the playoffs. The Rams are all but in, with a 99% chance of making it but for the Vikings, who only have a 35% chance, it’s essential that they win out.

Can Kirk Cousins’ Vikings keep their hopes alive or will Matthew Stafford put them to the sword? Be sure to read our NFL picks and predictions for the Los Angeles Rams vs. Minnesota Vikings.

We’ve only seen very minor movement so far. The Vikings have remained as 3-point underdogs since opening but the total points number has risen from 48.5 to 49.5, with bettors expecting a shootout.

The Vikings are 3-7 SU in their past 10 home games. Find more NFL betting trends for Rams vs. Vikings.

Rams vs Vikings picks and predictions

When the Los Angeles Rams beat the Seahawks on Tuesday night, it increased their chances of reaching the playoffs from 96% to 99%. It’s going to take an incredible turn of events for them not to get in at this point but there’s always a chance.

The .500 Minnesota Vikings don’t have quite that luxury. Their win over the Bears moved them from a 23% to 35% likelihood of a playoff berth. They need to win out and have other results go their way. That makes beating the Rams on Sunday essential and Mike Zimmer will have hopes that they can pull it off.

This isn’t a vintage Vikings team as their 7-7 record indicates but they have consistently been in close games. Despite their defense, usually a strong point for Mike Zimmer's teams, is in the lower half of those in the league. Only three teams have allowed more passing yards this season and worryingly, only the Seahawks and Jets have allowed more scrimmage yards per game, a huge 380.6. That doesn’t bode well against Matt Stafford and you can see the former Detroit man putting up some big numbers.

The Rams' defense isn’t near the top of the charts in either passing or rush defense but they’ve had a tough schedule. A fairer ranking, weighted defensive DVOA, puts them fifth in the NFL. Aaron Donald is still the best defensive player in the league and the addition of Von Miller has added a great pass rush option. Not to mention Jalen Ramsey, who's still arguably the best corner in the game.

Things are closer when it comes to offense with the Vikings ranked 12th in weighted offensive DVOA and the Rams, surprisingly given their weapons, ranked ninth. Injuries to Robert Woods damaged the team but the addition of Odell Beckham Jr. has likely made up for his absence. Upgrading from Jared Goff to Matthew Stafford has elevated this team, in particular Cooper Kupp. Kupp was already the Rams’ go-to man but this season he’s gone nuclear and finally put all Julian Edelman comparisons to bed. Nobody in the league has had this much influence on their team in 2021, which is why Cooper Kupp should be MVP.

Justin Jefferson and Dalvin Cook are the backbones of the Vikings' offense and both have been spectacular at points this year. Despite being a sophomore, it’s fair to say that Jefferson is already a Top-5 receiver in the NFL. The Vikings have enough talent to be able to hang with the Rams and keep it close but the difference in both teams' defenses will be what decides the game. I’d expect the Rams to not only win but cover in the process, I’d take Sean McVay's team by anything up to a score.

The total points line is set at 49.5 and has already risen from 48.5. The public money is backing the Over and it’s understandable given the offensive talent on display.

Despite that, the trends point us towards the Under. The Under is 5-1-1 in the Rams' past seven games on field turf and 5-1 in their past six games in December. Likewise, the Under is also 7-3 in the Vikings' past 10 games as a home underdog.

There is a chance of a shootout but we’re going to fade the public money and take the Under here.

When the Rams lost Cam Akers in the preseason, they made an immediate move, trading for Sony Michel from the Patriots. Michel had underwhelmed in New England but his skill set seemed ripe for a Sean McVay team and he was tipped to seize the backfield from Darrell Henderson. Except it never really happened, until now.

Henderson is still regarded as the leader of the backfield but that’s changed. With Henderson out, it was Sony Michel who took control and he maintained that when Henderson returned to the lineup last week.

Against the Seahawks, we saw Michel take 48 snaps, 25 routes, compared with 18 snaps and 8 routes for Henderson. Sony Michel dominated in carries, 18 to 6 and turned his into 92 yards, an average of 5.1, far higher than Henderson’s 3.8. It’s taken some time for Sony Michel to take the lead back role but it feels like it’s his for the remainder of the season now. He’s a more capable back, more dynamic and a better schematic fit. I’d back Michel to hit the Over on his scrimmage yards prop and to score a touchdown, but it’s his rushing yards prop that is perhaps the most sensible to back. 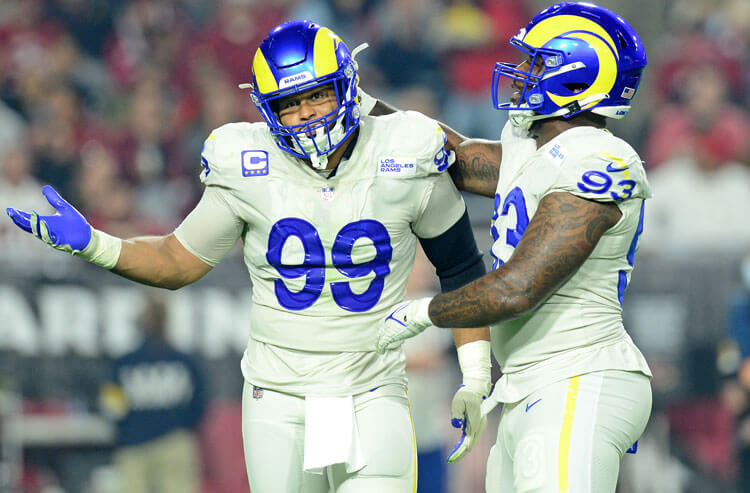 Rams vs Vikings Week 16 Picks and Predictions: Can L.A. Extend Win Streak in Minny?
Provided by