Tampa Bay may have gotten shut out last week, but there's no better opportunity to get right than a date with a Panthers squad in disarray. Though dealing with key injuries, we're expecting a Buccaneer-sized bounce back in our Week 16 NFL betting picks.

You don’t want to face an angry Tom Brady but the Carolina Panthers will have to face that when the Tampa Bay Buccaneers arrive in town on Sunday. Brady was shut out against the Saints and he won’t let that happen again. Meanwhile, the Panthers are a mess with head coach Matt Rhule angering the fanbase and seemingly sleepwalking towards losing his job.

Find out what happens by reading our NFL picks and predictions for the Tampa Bay Buccaneers vs. Carolina Panthers.

The total for the game has remained at 44 since opening but in that time the Panthers have gone from 11.5 to 10-point underdogs.

The Panthers are 0-4 ATS in their past four games overall. Find more NFL betting trends for Buccaneers vs. Panthers.

Buccaneers vs Panthers picks and predictions

When Tom Brady got shut out against the Saints last week it meant two things. Firstly, it meant that they’d lost to their (now) 7-7 divisional rivals. Secondly, it meant that whoever was next to face Tom Brady was in for a rough Sunday. Sadly for Matt Rhule, currently on the hot seat, that’s the Carolina Panthers.

The Panthers sit rock bottom of the NFC South with just five wins, half that of the Bucs and behind the Falcons. The Panthers have lost four on the spin and they’ve been awful this year. The fans want Matt Rhule’s head and it’s easy to understand why — the team has no identity. Rhule doesn’t seem to know who he wants at QB and has already said that both Sam Darnold and Cam Newton will see action on Sunday.

Whoever we see under center is unlikely to have a great day against the Buc's defense, who despite a drop in performance levels from last year are still ranked seventh in defensive DVOA. While not hitting the heights of last year they are still the third-best defense against the run, allowing just 89 yards per game, although they’re middling against the pass, in part due to a number of injuries throughout the season to their secondary.

The Bucs' biggest issue going into this game is the offense, and notably who we’ll see playing on that side of the ball. Chris Godwin has found himself on IR and will be missing from this game but fellow receiver Mike Evans and running back Leonard Fournette are still questionable. Brady & Co. looked toothless against the Saints when his stars went down. In that game, we saw Brady feed his old buddy Rob Gronkowski, but the tight end was unable to take advantage and had his worst game in a long, long time. Even if Mike Evans does play it’s unlikely he’ll be fully fit and we’ll probably see Antonio Brown return from suspension. Alongside him, if he does indeed return, we’ll see Tyler Johnson, Scotty Miller and Jaelon Darden leading the receiver corp, but more on that later. With news of Leonard Fournette’s injury, the Bucs continued their policy of signing ageing players and brought on Le’Veon Bell to the team. Bell has been a shadow of his former Steeler-self since leaving Pittsburgh and won’t be a factor, instead, we’ll likely see Bruce Arians lean on Ronald Jones, who could have himself a day.

With an angry Brady, it’s impossible to look at this game ending in anything but an easy win for the Buccaneers. They’re likely to be without a number of key players from their offense but they’re facing a Panthers side in crisis. Regardless of who features for Matt Rhule’s team, Newton or Darnold, they’re not the answer for this team and won’t be able to damage a Bucs defense who are still amongst the league’s best. The line on the spread has moved from 11.5 down to 10 since opening, so it’s time to jump on it and back the Bucs to cover.

The Over is 5-0 in the Panthers' past five games and the Panthers have lost four of those. Regardless of who we see lining up for the Bucs on Sunday, they’ll be led by Tom Brady and nobody plays better with a grudge.

We’re going to see a Tom Brady clinic and I’d be staggered to see anything but a high-scoring performance from the GOAT. The Bucs have scored an average of 29.3 points on offense this season and even with a depleted roster, they’ll be putting up something around that, if not higher. The Panthers should be able to do enough with the ball in their hands to help smash the Over.

Gronk had a terrible game last time out against the Saints. Part of that was on him but it was also on the team’s injury situation. With so many players out, Brady targeted his trusted players, something he’s well known for.

Only managing to haul in two of his 11 targets was poor from Gronk so we can expect a regression to the norm this week, especially with Antonio Brown likely back and Mike Evans potentially too. Despite having more trusted players alongside him, that will actually benefit Gronk. We’ll see the Panthers' defense spread thinner with the more established talent on the field which should give Gronk better opportunities. Expect him to get back to business this week. 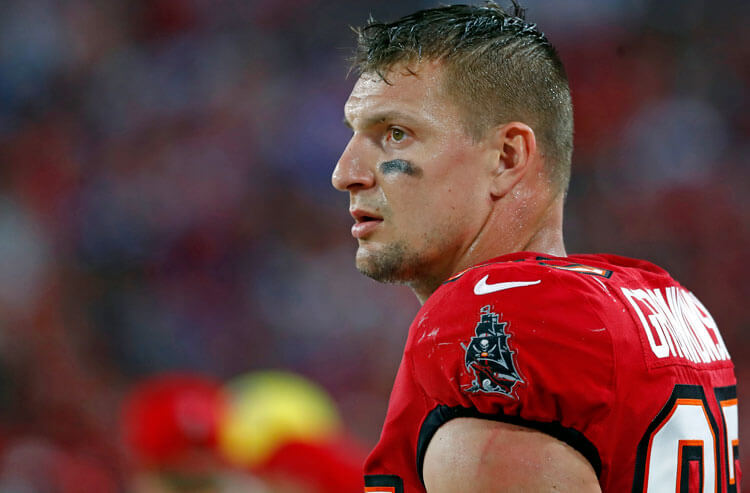