The No. 1 and No. 2 overall picks from 2021 are going head-to-head in Week 16, but which quarterback's team has the edge in this pick'em contest? Find out in our Jaguars vs. Jets betting picks and predictions.

The 3-11 New York Jets welcome the 2-12 Jacksonville Jaguars to MetLife in a game that has very few potential implications beyond draft order. The post-Urban Meyer Jaguars will be continuing to look to establish a new culture and Robert Saleh’s Jets will be trying to prove just how much they’ve improved this season.

If you’re curious about this game then study our NFL picks and predictions for the Jacksonville Jaguars vs. New York Jets.

The Jets opened as 2-point favorites but this game is now a pick’em with neither side heavily favored by the sportsbooks. The total points line has stayed readily at 41.5 since opening.

The Jets are 0-4 ATS in their last four games following an ATS win. Find more NFL betting trends for Jaguars vs. Jets.

Jaguars vs Jets picks and predictions

On Sunday, we see two of the league’s worst teams meet at the MetLife in East Rutherford. The Jacksonville Jaguars are currently in possession of the first overall pick at the 2022 NFL Draft after the Detroit Lions sensationally beat the Cardinals last week. If you think back to last year, you’ll remember the Jaguars ended up with the first overall pick after a couple of late wins by the Jets. Has lightning struck twice?

That first overall pick last year was used for the Jaguars to draft Trevor Lawrence from Clemson, the “can’t miss” prospect who was set to be the cornerstone of this franchise for the next decade. Meanwhile, the Jets fell in love with Zach Wilson, the BYU QB who was heralded by football media such as Chris Sims but, like Lawrence, has failed to reach the heights expected this year.

It’s always tough for a rookie quarterback in the NFL and I’m a believer that landing spot far outweighs talent, which is why we’ve seen Mac Jones, a far inferior QB performing well in New England while we’ve seen Lawrence and Wilson struggle.

Despite starting in every game and often playing from behind, Trevor Lawrence has only thrown nine touchdowns, he’s had 50% more interceptions with 14 and his QBR of 31.7 is the 28th in the NFL. Even with the caveats around playing for Urban Meyer, it’s been a very disappointing rookie season for a man that many thought was the best quarterback prospect since Andrew Luck. Now that he's free of Urban Meyer, he should continue to grow and it’s not his fault that D.J. Chark, the team’s best deep threat, has been side-lined all year, or that the team is leading the NFL in drops. He already looks like a leader on that team and I’m certain he can improve.

Zach Wilson has missed time through injury but his stats are arguably even worse. His TD to interception ratio is worse with 6-11 and his QBR also sits below Lawrence at 22.5. There’s already been talk from some experts that the Jets should use the rest of this year to evaluate Wilson and then potentially move on in the offseason. Despite some very poor play at times, that’s ridiculous and they need to give him more time to develop and prove his worth. He’s aware of his struggles and his decision-making does look to have improved as the season has progressed.

It’s not often that the first and second overall picks are quarterbacks and it’s even rarer that they meet in a game during their rookie season. In fact, this is just the fourth time it’s happened and the first time since 2015 when Jameis Winston and Marcus Mariota met in Week 1.

This game won’t be settled by either young QB or their offensive weapons. The Jaguars are injury-hit and devoid of any real stars with the exception of RB James Robinson and the Jets are missing a huge number of their best skill-position players, including rookie Elijah Moore, with injury and illness. The players who’ll decide this game are the ones on defense.

Neither of these teams are great defensively or they’d have combined for more than five wins all year but one is better than the other. Weighted defensive DVOA has the Jagaurs ranked at 28th in the NFL, four spots ahead of the Jets who sit dead last. Nobody in the league gives up more scrimmage yards than the Jets, an average of 391.8 per game.

This is going to be a really fun game and one which is arguably a lot more interesting than most neutrals would think. We’ll see two highly drafted rookies dualling it out against poor defenses and we’ll really find out which of these teams has the most heart and the most guts. It’s going to be a war but I think Trevor Lawrence and the Jacksonville Jaguars will come out on top.

We know about the struggles that both of these rookie QBs have had and they don’t need repeating but it has to be taken into consideration when we’re looking at the points total. The Under has been a strong trend for the Jaguars over recent weeks.

Neither team has truly excited this year and we’ll be backing the Under and hoping that both teams stick to form and don’t produce much on offense.

Both of these young quarterbacks have been wasteful with the ball at times this season and given up far too many picks. While neither defense is particularly elite, I do feel like there’s an incredibly high chance of a pick-six in this game. Both teams will look at this game as one they can realistically win and their players will be fired up. There’s certainly a better chance of a defensive score than odds of +220 imply. 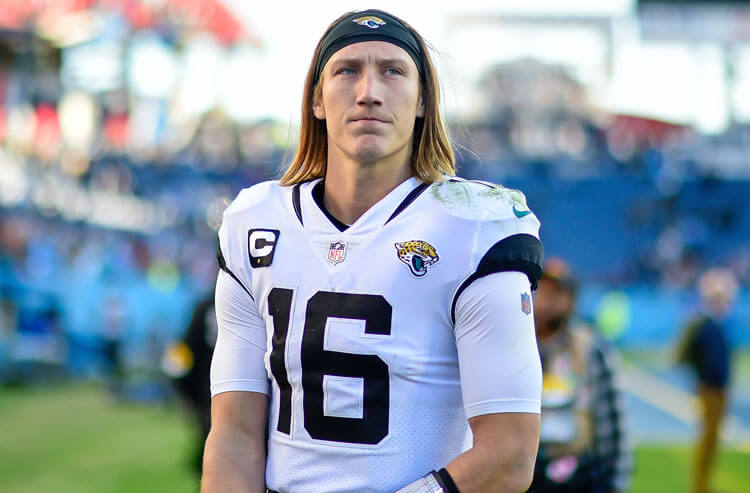